What you think about the events in Ferguson depends quite a lot on whether you're black or white. 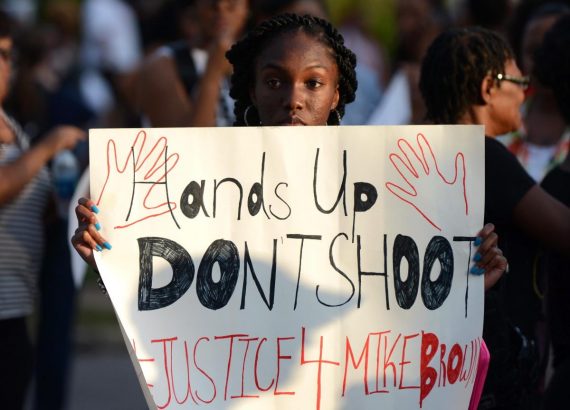 A new Pew Research Poll reveals something that probably shouldn’t be all that surprising, namely that black and white Americans view the Michael Brown shootings, and the protests that have followed in its wake, very differently:

Blacks and whites have sharply different reactions to the police shooting of an unarmed teen in Ferguson, Mo., and the protests and violence that followed. Blacks are about twice as likely as whites to say that the shooting of Michael Brown “raises important issues about race that need to be discussed.” Wide racial differences also are evident in opinions about of whether local police went too far in the aftermath of Brown’s death, and in confidence in the investigations into the shooting.

By about four-to-one (80% to 18%), African Americans say the shooting in Ferguson raises important issues about race that merit discussion. By contrast, whites, by 47% to 37%, say the issue of race is getting more attention than it deserves.

Not surprisingly, there area also sharp differences in perception of the Brown shooting and the police response to the protest based on political party, with 68% of Democrats saying that the incident raises important issues about race while 61% of Republicans say that too much emphasis is being placed on race. There is a similar partisan divide on the issue of the appropriateness of the police response, although not nearly as stark. Some 43% of Republicans say that the response has been about right, 20% say that it has gone too far, and 37% have no opinion. Among Democrats, on the other hand 56% say that it has gone too far, 21% say it has been about right, and 23% have no opinion. Independents are roughly divided on both questions.

To some extent, of course, the political divided is a function of the racial divide that is the primary focus of Pew’s article about the poll, and as I stated above that divide is hardly a surprise. We saw a similar racial divide in the wake of Trayvon Martin’s shooting and the protests that erupted during the two month period before George Zimmerman was formally charged with his killing. We saw it again during Zimmerman’s trial and then in the wake of his acquittal. And, we’ve seen in come up again and again in connection with other incidents that have some kind of a racial element to them, especially when they involve an interaction between young African-American men and police officers or those, like Zimmerman, operating even if only in their own mind under some kind of lawful authority.  While Americans tend to view these types of events through a lens that assumes that racial problems are a thing of the past, while African-Americans tend to view them through a lens that assumes that race is still very much a part of American life.

It’s not hard to understand why there is such a large gap between the races on this issue. For the most part, it can all be traced to the fact that white Americans and African-Americans have two very different perceptions of law enforcement and the justice system, and to be honest it is a difference that I’ve noticed in personal conversations regardless of one’s income level or level of education. When a well-off African-American with a stellar education tells you that they still have concerns about being stopped by a cop if they happen to be out driving late at night, you can’t just chalk that up paranoia. Obviously, there is some reason that so many African-Americans feel that way, and we are seeing the emotions that this fear creates playing out on the streets of Ferguson today.

Some on the right would tell us that we shouldn’t pay attention to things like this, that the fact that a young black man was shot by a white police officer doesn’t mean that it was necessarily a racially motivated incident. Quite honestly, they have a point. Even if it turns out that Officer Wilson’s actions do not meet the legal standard for justifiable homicide, that doesn’t mean that he’s also automatically guilty of the civil rights violations that the Federal Government is now investigation. However, that doesn’t mean that we should ignore the fact that so many African-Americans believe otherwise, nor should we dismiss the concerns that they raise that the shooting of Michael Brown is far from an isolated incident. At the very least, these perceptions need to be addressed even if they aren’t true because they lead to exactly the kind of frustration we’re seeing unfold right now. Above all, though, the fact that these perceptions are so widespread suggests strongly that there is some truth to them regardless of the fact that some Americans would like to view racial problems as something that’s part of the past.