The connections between the White House and failed solar energy company Solyndra deepen. 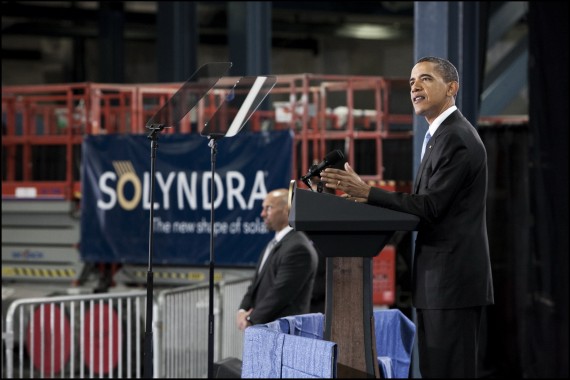 The investigation into the federally guaranteed loans to the now-bankrupt solar energy firm Solyndra has already begin, and ABC News reports that House investigators the White House became directly involved in the loan application process in order assist Solyndra in obtaining the loans that it has now defaulted on:

The allegation surfaced in a letter House Energy Committee Chairman Fred Upton (R-Mich.) sent to the White House Thursday night, saying he planned to accelerate efforts to understand an investment deal that may have left taxpayers out half a billion dollars.

“We have learned from our investigation that White House officials monitored Solyndra’s application and communicated with [Department of Energy] and Office of Management and Budget officials during the course of their review,” the letter says.

Thursday’s letter, which calls on the White House to turn over correspondence between administration officials, Solyndra and its investors, presents the most pointed suggestion that the White House had direct involvement in the financing.

“How did this company, without maybe the best economic plan, all of a sudden get to the head of the line?” Upton told ABC News in an interview this week. “We want to know who made this decision … and we’re not going to stop until we get those answers.”

This isn’t necessarily a new revelation. Way back on May 24th, ABC News was reporting the Administration had cut corners on behalf of the firm in order to get the loan approved:

The Obama administration bypassed procedural steps meant to protect taxpayers as it hurried to approve an energy loan guarantee to a politically-connected California solar power startup, ABC News and the Center for Public Integrity’s iWatch News have learned.

The Energy Department in March 2009 announced its intention to award Solyndra Inc. a $535 million loan guarantee before receiving final copies of outside reviews typically used to vet such deals. An independent federal auditor who has reviewed the energy loan program said moving so quickly without completing thorough reviews risked exposing the program to claims of political influence and put taxpayers at greater risk.

“There’s a consequence if you don’t follow a rigorous process that’s transparent,” said Franklin Rusco, an analyst with the Government Accountability Office. “It makes the agency more susceptible to outside pressures, potentially.”

The Solyndra loan guarantee, advertised by the administration as part of its signature effort to create jobs while weaning the U.S. from traditional energy sources, already has drawn scrutiny on Capitol Hill. Republican members of the House Energy and Commerce Committee have requested documents from the Energy Department as part of an investigation into how the company qualified for government support and then, a year later, closed a plant, laid off workers, and eventually had to renegotiate the terms of the loan guarantee. The shortcuts at the dawn of the deal identified by government auditors have stoked more questions.

The Energy Department said at the time that they had gathered enough independent evidence to approve the loan. However, one of the the key investors in Solyndra was the Oklahoma-based George Kaiser Family Foundation. George Kaiser, who heads the foundation, is a billionaire who also happens to a man who raised large amounts of money for Barack Obama. That, combined with the reported intervention by White House officials, raises some significant questions about the role the White House played in getting a company with a terrible balance sheet a multi-million dollar federally guaranteed loan. As it turns out, though, Solyndra isn’t the only company with connections to the Obama White House that got such loans:

Several political allies of the president have ties to companies receiving Energy Department loans, grants or loan guarantees. For instance, the venture firm of another top Obama bundler, Steve Westly, has financially supported companies that won more than half a billion dollars in energy grants and loans during President Obama’s time in office, iWatch News and ABC News reported in March. Relatively few applicants succeed in winning such benefits. The Energy Department said every one of those awards was won on merit.

Perhaps that will turn out to be the case, but based on the before and after picture of Solyndra it’s pretty clear that the criteria the government was using to determine the viability of the companies it was loaning money to was nowhere near adequate. As I said yesterday, this is by no means surprising. Government bureaucrats simply don’t have the incentive to be careful with these types of decision in the manner that private investment managers do, because they face no consequences for being wrong. That. faced with the possibility of political pressure from the White House, is yet another reason why Government should not be in the venture capital business to begin with.

Rich Lowry calls this “Obama’s Enron.” I’m not sure I’d go that far, but at the very least it does call into question the credibility of the Administration’s entire “Green Jobs” initiative and, if political pressure was indeed applied to the Energy Department then it’s a serious public integrity problem to say the very least. Count on hearing the name Solyndra in the news a lot over the coming months.