Reporter: I Wasn’t “Trapped In A Closet” By VP Biden’s Staff

Scott Powers, the Florida Sun-Sentinel reporter who’s reported confinement in what was described as a closet during a fundraising event attended by Vice-President Biden, seems to be a bit surprised that he ended up at the center of a cause celebre:

That was news to me.

My paper and I conspired to cover this up, to protect Vice President Joe Biden and his staff from charges they had imprisoned me at a fundraiser last week.

That was news to me too.

In fact, a lot of details circulating through the blogosphere — and into some mainstream media — about my coverage of Biden’s fundraising visit to a Winter Park home last Wednesday were news to me.

Here’s what happened. I showed up at the private home of developer, philanthropist and political contributor Alan Ginsburg Wednesday morning to file a pool report on the visit there by Biden and U.S. Sen. Bill Nelson, D-Orlando. When I arrived I was told I would not be able to speak with any of the people at the party, and that I was to wait in a room until Biden and Nelson arrived. I went in willingly, with the understanding that I was free to leave — but if I left I’d probably have to leave the house entirely, and not get to cover the speeches.

I called it a closet, because it was stuffed with shelves, boxes, baskets and other items in storage, and it felt like a closet. The vice president’s office called it a room used for storage. It had a light, a window somewhere in the back behind the shelves full of boxes, and a few square feet of open space in the front. They set up a small table and a chair for me. They offered me food, which I declined, and brought me a bottle of water. They closed the door.  I sat to wait, mistakenly thinking it would be only a few minutes. The door wasn’t locked, though every time I opened it and stepped out to see what was going on a staffer told me I couldn’t come out yet. He’d let me know.

It was more than an hour, and when I was finally led out, Ginsburg, Nelson and Biden were just getting ready to talk. I listened, recorded the speeches and took notes, then was led back to the little room to wait until they left, about 15 more minutes, before they led me to my car.

While I was in the closet, getting impatient and annoyed, I snapped a picture with my cell phone and e-mailed it to my editor, Bob Shaw, explaining that this is where I was at, and this is why I wouldn’t be filing anything about the party before the speeches. He wrote up an item and posted it, with the picture, on this blog. His post was a bit snarky. He likes snarky. So do I. I thought it was funny. The post and picture also ran in the Orlando Sentinel newspaper the next morning, along with my write-up of Biden’s speech. People told me they thought it was funny.

Then, the story got picked up by the internet, and specifically the Drudge Report, and suddenly Powers was a star and his account of the event didn’t seem to matter to anyone:

Bloggers around the country, it seems, had determined that either we had published a story on-line luridly detailing the alleged kidnapping, then later removed it, or we chose to not write about it at all. Either way, we were shilling for Biden and the Democrats.

So I talked to Joe, and he posted a decent account on Drudge. I thought that would end it, but it only opened flood gates, from other media. Some I talked to, hoping to clarify the matter. But I discovered that whatever I said was irrelevant to other bloggers and posters who concluded that I was spin-controlling, continuing the cover-up. Some called me a liar and worse. But the real vile was naturally aimed at Biden.

I generally agree with James Joyner that this was fairly incompetent staff work on the part of Biden’s people. They should have made better arrangements for any reporters who wanted to cover Biden’s and Nelson’s speeches. However, Powers doesn’t seem all that annoyed by it at this point and is in fact rather frustrated that his efforts to clarify what actually happened were ignored once the story went viral. But that, I suppose, it what happens when one becomes an internet meme. 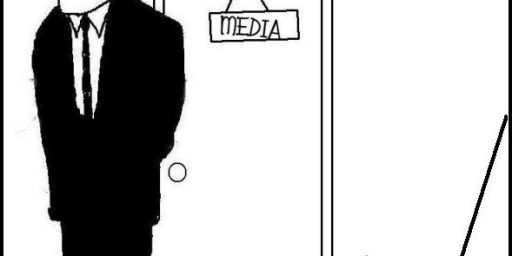