Republican Congressman: We Must Stand Behind Our Friend, The Dictator Mubarak

One Republican Congressman is calling on President Obama to stand firmly behind our "friend" in Cairo, even though there's little evidence we can trust him. 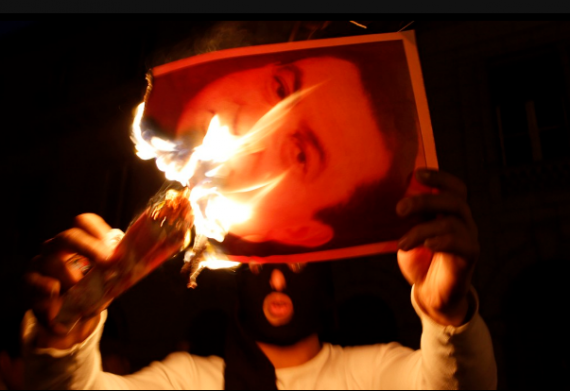 Michigan Congressman Thaddeus McCotter has what I think must be the most unique, albeit mistaken, take on the crisis in Egypt:

For if Egypt is radicalized, all of the reforms sought by the Egyptian people and supported by the United States with them – including consensual and constitutional government; free elections; open and unbridled media; and Egyptian control of their natural resources – will be lost. Nascent democratic movements in the region will be co-opted and radicalized. The world’s free and open access to the Suez Canal’s vital commercial shipping lanes will be choked. And the Sinai Accord between Egypt and Israel – which must be protected as the foundation and principal example for Mideast peace – will be shredded.

Though many will be tempted to superficially interpret the Egyptian demonstrations as an uprising for populist democracy, they must recall how such similar initial views of the 1979 Iranian Revolution were belied by the mullahs’ radical jackbooted murderers, who remain bent upon grasping regional hegemony and nuclear weaponry…

This is not a nostalgic “anti-colonial uprising” from within, of all places, the land of Nassar. Right now, freedom’s radicalized enemies are subverting Egypt and other our allies.

I guess I’ve got two questions from Congressman McCotter, and those who would agree with him.

First, what evidence is there that the Mubarak regime is at all “capable of reform” ?

This is a man who has held an iron grip on power for thirty years — to the point where, up until today, Egypt didn’t even have a clear line of succession to the Presidency from the day Anwar Sadat was assassinated until the first Vice President in 30 years was appointed today? Political opponents, not just limited to the Muslim Brotherhood, are regularly imprisoned. Blogger critical of the government have been imprisoned and tortured. And, until these protests started, Mubarak was ready to follow in the footsteps of men like Hafez el-Assad and Kim Jong-il and turn his country into a hereditary dictatorship. Throughout this time, the United States has shown little inclination to chide Mubarak about conditions inside his country and, as his actions in the hours since President Obama spoke have shown, Mubarak doesn’t seem inclined to listen to them now.

Second, how exactly does McCotter (or anyone else for that matter) know what the motivations of the protesters on the streets of Egypt actually are?

Clearly, there is reason to worry that a power vacuum in Egypt could bring the Muslim Brotherhood, or those sympathetic to them, to power. However, its been apparent over the past four days that these protests are not primarily motivated by that group, and there have been scattered reports of protesters drowning out the shoots of MB sympathizers at rallies.  This is why caution is called for. Neither an immediate call for Mubarak’s ouster nor a total rejection of the protesters as McCotter advocates are the right course of action. Most importantly, we don’t want to make the same mistakes we did in Iran and become associated with the minds of the public with a repressive and hated regime. Although, admittedly, it may be too late for that.

Throwing Mubarak under the bus isn’t advisable at this point, simply because we don’t know where things are headed from here. At the same time, rejecting the protests in the way that McCotter does strikes me as incredibly short-sighted.