Last night's debate may have been the last one. It was also the least informative. 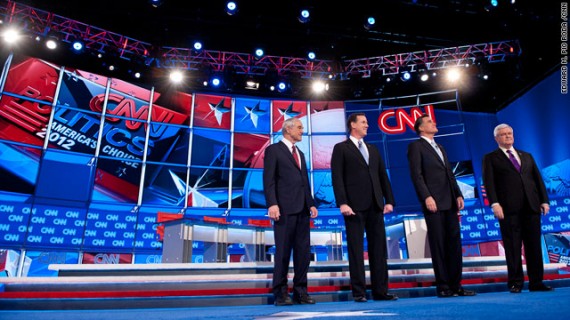 Last night’s debate was the first time the four remaining Republican candidates had shared a stage together in nearly a month. Since that happened, we’ve seen a Romney blowout in Florida,  a mess of a caucus in Nevada, and three meaningless contests won by Rick Santorum. We’ve seen Newt Gingrich fade away to near nothingness while Rick Santorum rose yet again to become, at least for the moment,  the Republican frontrunner. In the meantime,  a race that was supposed to be about the economy has inexplicably become focused on meaningless social issues like contraception, whether or not America is being slowly destroyed by Satan, and the theology.

With Rick Santorum on the rise in Michigan, not to mention in states like Ohio, Texas, and Oklahoma, last night was widely seen as a crucial moment for Mitt Romney to rebuild a campaign that seemed to have wandered off the rails, and a chance for Rick Santorum to perhaps seal the deal with conservatives. As it turned out, though it was mostly a lackluster affair in which Mitt Romney managed yet again to do while while Rick Santorum shriveled away:

MESA, Ariz. — Mitt Romney challenged Rick Santorum’s credentials as a fiscal conservative in a fiercely combative debate on Wednesday, trying to redefine Mr. Santorum as part of the problem in Washington and regain his footing in the fight for the Republican presidential nomination.

With the Arizona and Michigan primaries only six days away, followed quickly by a dozen more contests, Mr. Romney arrived here at a critical moment of his candidacy armed with a detailed indictment of Mr. Santorum’s record in Congress. Mr. Romney sought to dismantle his rival’s claim to be the authentic conservative in the race.

It was Mr. Santorum’s first time in the cross hairs as a leading candidate, an uncomfortable position that has set back other Republican challengers. He did not recoil or wither under pressure, but he was placed on the defensive again and again, with Mr. Romney and Representative Ron Paul of Texas acting as a tag team in critiquing his record in Congress.

They criticized his earmarks, his vote for a provision that financed Planned Parenthood and his support of the No Child Left Behind law, President George W. Bush’s signature education plan now out of favor with conservatives. By the end of the night, the scrutiny seemed to wear on Mr. Santorum, who was taunted with boos when he said he had voted for the education program even though “it was against the principles I believed in.”

He explained that he had done so because of its importance to Mr. Bush, saying: “Sometimes you take one for the team, for the leader.” That line provided an opening for Mr. Paul, who declared: “He calls this a team sport. He has to go along to get along, and that’s the way the team plays, but that’s what the problem is with Washington.”

The landscape of the Republican presidential campaign — reshuffled yet again since the last time the candidates debated on Jan. 26 — came into sharp view here on stage at the Mesa Arts Center. It was the final scheduled Republican debate on the calendar, but unless a presumptive nominee emerges swiftly, debates could take place throughout the spring as the party’s nominating contest becomes a drawn-out fight for delegates.

If Mr. Romney came across as a persistent prosecutor, jumping in eagerly to make his points, Mr. Santorum was defensive yet did not lose his temper as others have in the hot seat.

From the start, it appeared that Mr. Romney and Mr. Santorum had a shared goal: turning the night, and the race, into a two-man contest. But Newt Gingrich came alive yet again, not as an angry combatant but as what he described as a “cheerful” alternative, enthusiastically challenging the moderator, John King of CNN, and turning questions to his own purposes.

The candidates sat behind a table for only the second time in the long-running series of debates, rather than standing behind lecterns, which at times made them seem like squirmy schoolchildren scrunched into classroom desks.

The economy — the dominant issue to most voters — took a back seat to a host of other topics in the wide-ranging debate, which dwelled on social issues, immigration and the arcane world of Congressional voting records. Mr. Romney played up his status as the only candidate on the stage who had never served in Washington, but Mr. Santorum would not let his rival take credit for balancing the budget as governor of Massachusetts, which is required by state law.

“Don’t go around bragging about something you have to do,” Mr. Santorum said. “Michael Dukakis balanced the budget for 10 years. Does that make him qualified to be president of the United States? I don’t think so.”

Mr. Santorum parried the barbs from Mr. Paul as he has all year, often laughing and shaking his head. But the exchanges between him and Mr. Romney were sharper.

“You don’t know what you’re talking about,” Mr. Santorum told him at one point.

Mr. Romney used it as an opportunity to attack one of Mr. Santorum’s greatest perceived strengths among conservatives — his opposition to abortion  — by noting that Mr. Specter supports abortion rights. Mr. Romney also noted that Mr. Santorum had supported a provision that provided financing to Planned Parenthood.

Mr. Santorum acknowledged he had voted for the financing provision, but as part of “a large appropriation bill that includes a whole host of other things.” He added that he had “a personal moral objection to it,” even though “I voted for bills that included it.” The exchange provided one of his more uncomfortable moments of the night, explaining the messy legislative process and all of its complications.

Perhaps the most frustrating thing about last night’s debate is that, once again, it seemed to totally eschew any real talk about what is supposedly the top issue on voters’ minds right now, the economy. There was about a 30 minute segment at the beginning where the candidates talked about the budget, cutting spending, and taxes, but that was about it. It was rather surprising, actually, given the fact that many of the questions came from the audience and Arizona has been hit particularly hard by the recession. Surprisingly, though, we didn’t get nearly as many questions about social issues as I thought we would. When John King introduced a question about contraceptives from a CNN viewer, the audience reacted with loud boos and the candidates essentially rejected the question as irrelevant, which it largely is of course. After that, the subject was never brought up again.

Of course, that doesn’t mean that the candidates moved on to more substantive and interesting topics. To be honest, after 20 debates it’s kind of hard to find any new material. Everyone knows about RomneyCare at this point. Everyone knows about Newt Gingrich’s past. Everyone knows where these candidates stand when it comes to foreign policy issues ranging from the war in Afghanistan, to Iran, to North Korea. There are only so many ways you can ask these candidates the same questions about the same topics and keep it even remotely interesting. If last night proved anything, it proved that we’ve largely reached a saturation point when it comes to Republican debates. At the present moment, there are no further debates on the calendar and that seems just about right. We know what these candidates will say, we know where the stand, we really don’t need another round of reality television.

If there was any new ground covered last night, it was Rick Santorum’s record. Up until now, we haven’t seen Santorum be the focus of sustained questioning in any of these encounters largely because he really wasn’t considered either a contender or a threat up until now. Last night though, he was under direct scrutiny and, for the most part, he didn’t fare well. When asked to justify his support for things like No Child Left Behind and Medicare Part D while he was in the Senate, for example, Santorum said that he “took one for the team,” meaning that he basically only voted for the bills because they were supposed by the Republican leadership and the President. It was a response that didn’t go over well with the audience in the hall, and one that’s likely to hurt Santorum going forward because it undercuts his claims to be a lifelong principled conservative. There was also an inordinate amount of time spent on Santorum’s support for earmarks, which strikes me as a ridiculous argument against him principally because earmarks constitute such an infinitesimally small part of the Federal Budget and have absolutely nothing to do with our nation’s spending problems.

In the end, I doubt that this debate will have much of an impact on the race, though. The momentum in Michigan continues to suggest that we’re heading for a close finish between Romney and Santorum and nothing that happened last night seems likely to change that significantly. In Arizona itself, Romney’s lead in early voting seems to be so large that it, along with the strong Mormon presence in the state, is likely to guarantee a victory for him. Beyond next week, though, we’ve got Super Tuesday and a number of primaries in the South and it seems unlikely that anything that happened last night is going to stop Santorum in those states. The debates may, thankfully, be a thing of the past, but this race is far from over and the outcome is as uncertain as it was before the debate started.