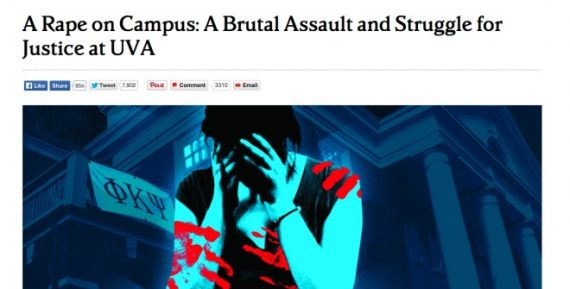 A jury in Virginia has found for the Plaintiff in a lawsuit filed against Rolling Stone and several of its employees related to the cover story the magazine published in 2014, later retracted, that purported to detail a rape at the University of Virginia involving one of the college’s leading fraternities:

CHARLOTTESVILLE, Va. — A jury on Friday found Rolling Stone magazine liable in a defamation suit brought by a former dean at the University of Virginia involving a discredited 2014 article about a supposed gang rape at the university.

The suit was brought by Nicole P. Eramo, a former associate dean of students at the university, who said the Rolling Stone article depicted her as the “chief villain” of the story.

The jury found liability on the part of Rolling Stone; its parent company, Wenner Media; and the author of the article, Sabrina Rubin Erdely. Lawyers for Ms. Eramo argued that Rolling Stone and Ms. Erdely were reckless in their reporting and editing and that Ms. Erdely deliberately avoided following leads that could have disproved the story.

Ms. Eramo slumped into the arms of her lawyer, Libby Locke, as the clerk read the verdicts.

The 9,000-word article, titled “A Rape on Campus,” was published in November 2014 and helped start a national conversation about sexual assaults on campuses. But details of the article relied heavily on a single source, identified only as Jackie, who said she had been the victim of a gang rape at a fraternity party.

Rolling Stone soon commissioned a review of the article by the Columbia Graduate School of Journalism. The school’s report, released in April 2015, found that the magazine had failed to engage in “basic, even routine journalistic practice” to verify details Jackie had told it. The magazine then retracted the story.

Nevertheless, in videotaped testimony shown during the trial, Jann S. Wenner, Rolling Stone’s founder and editor, said the magazine was wrong to retract the story fully.

“We did everything reasonable, appropriate up to the highest standards of journalism to check on this thing,” Mr. Wenner said. “The one thing we didn’t do was confront Jackie’s accusers — the rapists.”

Referring to Jackie, Mr. Wenner said there was nothing a journalist could do “if someone is really determined to commit a fraud.”

The jury found that assertions made within the article, as well as post-publication comments and news releases by Rolling Stone, were defamatory.

In a pretrial ruling, the judge determined that Ms. Eramo was a public figure. That ruling sets off the “actual malice” standard, which requires a plaintiff who is a public figure to prove that the publisher knew it had published falsehoods or acted in reckless disregard of its truth or falsity.

After the verdict, Rolling Stone released a statement that said in part: “In our desire to present this complicated issue from the perspective of a survivor, we overlooked reporting paths and made journalistic mistakes that we are committed to never making again. We deeply regret these missteps and sincerely apologize to anyone hurt by them, including Ms. Eramo.”

Rolling Stone’s  words in the wake of the verdict are obviously too little too late. From the moment that this story was first published, it seemed obvious that there was something seriously wrong with the way it was reported and the extent to which the editors of the magazine were negligent in allowing it to be published without any significant fact checking. Nearly as soon as the report came out, for example, we learned that “Jackie” asked the reporter not to talk to anyone other than her friends about the allegations, which meant not speaking to anyone at any of the fraternities on campus and not speaking with the individual that “Jackie” had apparently identified as her attacker. Had they done so, the magazine would have discovered fairly quickly that the story they were being told had so many factual holes that there was almost no way she was telling the truth. It was only through follow-up reporting by other media organization, though, that the extent of journalistic malpractice became apparent.  The Washington Post, for example, published a detailed report based on its own investigation that made it apparent that the alleged assault in question never happened. For example, the Post’s reporting established that the physical description of the fraternity house in the article did not match what the building actually looked, that there was no party on the night the assault allegedly took place or at any time near that date. These are facts that the author of the piece could have easily discovered had she spoken to the fraternity, or if one of the Rolling Stone editors had done so before approving the article.   Following that, the Columbia Journalism Review released a detailed report on the incident and found numerous violations of journalistic ethics and good practices by Rolling Stone and by Sabrina Rubin Erdely, the reporter behind the story. In response, the magazine has essentially rescinded the story, although nobody associated with the original report has been fired or disciplined. Based on this, it’s no wonder that the jury found not only that the story was false but that it was published with the sufficient level of ‘actual malice’ to meet the tough standards set down for libel suits involving public figures established in the Supreme Court’s decision in New York Times v. Sullivan.

From here, the case moves to a damages phase where the jury will be asked to assess damages against the magazine, the reporter who wrote the story, and the editor who supervised her. This will include both some measure of actual damages for the damage to the Plaintiff’s reputation and punitive damages, which would have have to be based on the willfulness of the Defendants’ actions in the case. Given the fact that the jury so seemingly easily returned a Plaintiff’s verdict on the underlying case, one can imagine that the potential damages in the case could be quite large. After that, Rolling Stone will no doubt appeal the case through the Virginia court system. The first step there would be an appeal to the Virginia Supreme Court, which is entirely discretionary. Beyond that, the case does have the potential of ending up in the Supreme Court of the United States due to the First Amendment issues it raises. Given the appalling lack of journalistic basics involved in the “reporting” here, though, the odds that the verdict will be overturned seem to me to be pretty low. Additionally, Rolling Stone faces others litigation involving this case that is likely to go badly as well. The fraternity that was the subject of the allegations in the report, for example, filed its own defamation suit that should be going to trial soon as well. The verdict in this case won’t be binding, of course, but it no doubt comes as good news to the Plaintiffs in that case. Rolling Stone would be well advised to explore settlement possibilities in that case in fact, otherwise it faces the probability of two massive verdicts that could pose a real challenge to the long term viability of the magazine.