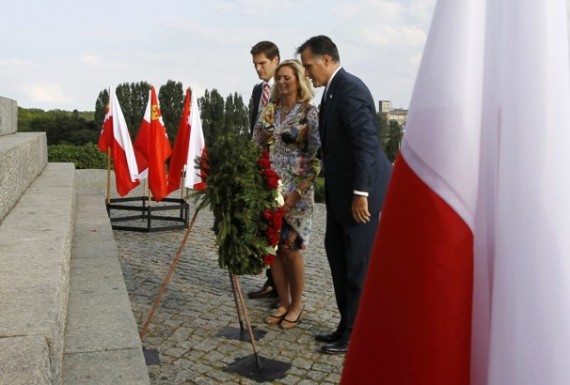 Mitt Romney’s Press aide Rick Gurka had a run in with the press today just before the candidate’s speech in Warsaw:

Warsaw, Poland (CNN) - The traveling press secretary for Mitt Romney lost his cool and cursed at reporters who attempted to ask questions of the Republican presidential candidate in a public plaza near the Tomb of the Unknown Soldier in Warsaw Tuesday.

After Romney paid his respects to Poland’s war dead and shook hands with a small gathering of the nation’s military veterans, the GOP contender walked approximately 100 yards away from the memorial as he chatted with Warsaw’s mayor.

As Romney made his way to his vehicle, reporters attempted to shout questions to the candidate. The former Massachusetts governor, who has answered only three questions from his traveling press corps during a week-long overseas trip, ignored the queries. Romney did sit down for multiple interviews during his foreign swing, including with CNN’s Piers Morgan and Wolf Blitzer. Romney also spoke with NBC News, CBS News, ABC News and Fox News during his trip.

When members of the press tried to ask Romney about some of the mishaps on his trip, his traveling press secretary Rick Gorka verbally dressed down reporters.

Here’s how it went down:

CNN: “Governor Romney are you concerned about some of the mishaps of your trip?

NYT: “Governor Romney do you have a statement for the Palestinians?

NYT: “Governor Romney do you feel that your gaffes have overshadowed your foreign trip?”

CNN: “Governor Romney just a few questions sir, you haven’t taken but three questions on this trip from the press!

NYT: “We haven’t had another chance to ask a question…”

Gorka: “Kiss my ass. This is a Holy site for the Polish people. Show some respect.”

Gorka apparently also told a Politico reporter to “Shove it” before apologizing to all involved at some point in the future. Gurka’s choice of words notwithstanding, it does strike me that the press corps was being just a bit disrespectful considering that the purpose of Romney’s visit to the memorial was to lay a wreath at the site. Would they do the same thing at the Tomb Of The Unknowns in Arlington, Virginia? Yea, Gurka was wrong to lose his cool but the press should have been more respectful of where they were at the time. Nonetheless, the story is getting no small degree of attention but, as with many things the political press covers, far more than it deserves.

Sebastian Gorka Out At White House