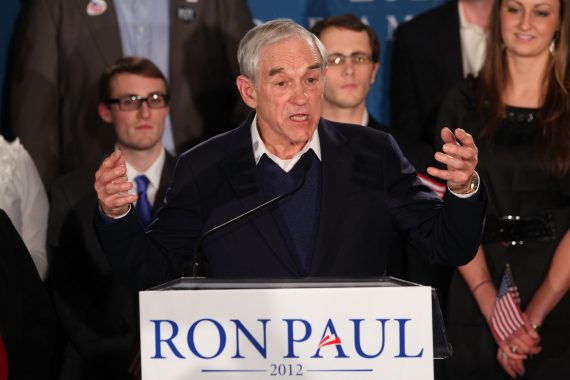 Ron Paul once again told his supporters in an email last night that it is clear he’s not going to be the Republican nominee:

(CNN) – Ron Paul, who has not officially dropped his bid for the Republican presidential nomination, admitted to supporters in an email Wednesday he was not positioned to receive enough delegates to challenge Mitt Romney at the GOP convention in Tampa.

The delegate math, however, won’t stop his supporters from voicing their stance on small government and fiscal reform, Paul wrote.

“When it is all said and done, we will likely have as many as 500 supporters as delegates on the Convention floor,” the Texas congressman wrote. “That is just over 20 percent! And while this total is not enough to win the nomination, it puts us in a tremendous position to grow our movement and shape the future of the GOP!”

CNN currently estimates Paul to have the backing of 140 delegates. In May, Paul’s campaign said it would shift its focus from competing in primary states to securing delegates at state party conventions ahead of the national Republican convention in Tampa, Florida in late August. Paul is not running for re-election to the U.S. House of Representatives.

In his letter, Paul said delegates supporting the presumptive GOP nominee Mitt Romney would also help his cause.

“We will send several hundred additional supporters to Tampa who, while bound to Romney, believe in our ideas of liberty, constitutional government, and a common-sense foreign policy,” Paul wrote.

Paul urged his backers to remain civil Wednesday, saying the movement was poised to wield ever greater sway in future elections.

“Our delegates’ presence must be felt both in Tampa and in years to come,” Paul wrote. “Stand up for what we believe in. Be respectful. And let the establishment know that we are the future of the Party and of the country.”

That “be civil” part is something Paul supporters should take to heart, especially given things like the embarrassing way they behaved at the recent Louisiana GOP Convention. Will they listen? Personally, I wouldn’t be surprised to see a spontaneous floor demonstration in Tampa, even though it doesn’t appear that’s what Paul has in mind.