Ten hours later, the candidates seemed more combative than they had been the night before. 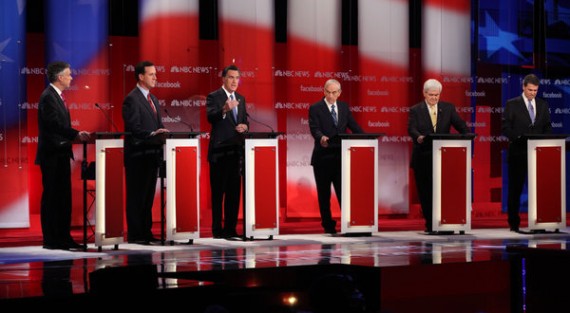 Unlike last night’s debate on ABC, this morning’s MSNBC/Facebook debate was certainly more interesting, more substantive, and more entertaining. Where last night saw every one of the the candidates pulling their punches every time they were given a chance to go after Mitt Romney, this morning saw Newt Gingrich, Rick Santorum, Rick Perry, Ron Paul, and Jon Huntsman all took their shots not just at each other, but at Mitt Romney. Many of the attacks didn’t seem to me to be on issues that really mattered though. Rick Santorum got into an extended exchange with him over why he didn’t run for re-election as Governor in 2006, for example, and Newt Gingrich got into an argument with Romney over SuperPAC ads that Gingrich claims were incorrect. Jon Huntsman, meanwhile, took the opportunity to strike back at Romney for criticizing him for accepting the President’s request to serve as Ambassador to China, making a point about serving ones country that got applause from the audience. Rick Perry, who held elected office since 1986 and only recently resigned as head of the Republican Governor’s Association, claimed to be the only “outsider” on the stage. Through it all, Romney took the attacks as they came, responded to each of them, and once again walked off the stage as a frontrunner who had not been significantly damaged:

CONCORD, N.H. — The five major Republican presidential candidates who are not named Mitt Romney ferociously attacked him during a debate here Sunday morning, questioning his conservative credentials, his authenticity and even his honesty just two days before the first-in-the-nation primary.

One by one, the rivals lined up against Mr. Romney, the established front-runner, engaging him in some of the most pointed exchanges of the campaign so far.

Former House Speaker Newt Gingrich disputed Mr. Romney’s assertion that he was not a lifetime politician, saying: “Can we drop a little bit of the pious baloney?”

Former Senator Rick Santorum of Pennsylvania turned to Mr. Romney and declared: “We want someone when the time gets tough — and it will in this election — who will stand up for conservative principles.”

Even former Gov. Jon M. Huntsman Jr. of Utah, who has struggled to stand out in debates, scored points with the audience when he said Mr. Romney was out of line in attacking him for having served as President Obama’s ambassador to China. “This nation is divided,” Mr. Huntsman said shaking his head, “because of attitudes like that.”

Mr. Romney wore a wide smile and seemed intent on not losing his cool, but at times he snapped at rivals, turning toward Mr. Santorum during one tense exchange and saying, “you’ve got a surprised look on your face — it’s still my time.”

But he pushed back at every turn, defending his record as governor of Massachusetts and record as a conservative. He ticked through a list of Republicans that he said “don’t have an ax to grin,” who have endorsed his campaign, from Gov. Chris Christie of New Jersey to Senator Kelly Ayotte of New Hampshire to Gov. Nikki Haley of South Carolina.

Staying on offense when he could, Mr. Romney criticized the Washington careers of Mr. Santorum and Mr. Gingrich, whom he accused of profiting handsomely after leaving Congress. “I think it stinks,” he said.

He argued that he was the most electable Republican nominee because of his experience leading a business and overseeing the Winter Olympics.

The exchanges with Mr. Romney offered little new information to voters who are two days away from making their decision in the New Hampshire primary. But it underscored the tough race that awaits Mr. Romney when the nominating contest moves to later this week to South Carolina, which is considered more difficult terrain for Mr. Romney than New Hampshire.

Some of post-debate spin is asserting that this debate could hurt Romney in the final hours of the New Hampshire campaign, but that seems pretty unlikely given the size of Romney’s lead in the Granite State. If there is an impact, it’s likely to be one that helps Jon Huntsman a little bit, although probably not enough to give him an argument for going forward. It’s possible that the debate will have some impact on the race in South Carolina, which is where all of this is really heading, the problem for the “Not Romney” crowd, though, is that it’s likely to help Romney more than it hurts him. The reason for that is that, paradoxically, this debate and the previous one were relatively good for all of the “Not Romney’s,” especially including Rick Perry, and as long as the anti-Romney vote in South Carolina is divided, Romney benefits.

On the other hand, though, I find myself nodding in agreement with Philip Klein when he argues that this debate would’ve meant more if it had happened months ago:

Had this all happened in September, we may be looking at a race where Perry had just won Iowa and was well ahead in South Carolina, while Huntsman was nipping at Romney in New Hampshire. But this isn’t September.

Instead, over the past several months, rivals hardly laid a glove on Romney. Perry had one disastrous debate performance after another and dropped like a rock in the polls. After a succession of candidates rose and fell, eventually Rick Santorum emerged as the leading conservative alternative to Romney. And Huntsman, boring and obnoxious in debates, never took off in New Hampshire. So what we’re left with is a situation in which Romney is so far ahead in his quest for the GOP nomination, that barring a major catastrophe, he’s unlikely to lose. In football terms, he’s in the prevent defense — able to surrender lots of yardage to his opponents in the middle of the field and still win as long as he doesn’t turnover the ball.

As Klein goes on to note, a lot of things would have to happen in a very short period of time for Romney’s momentum to be blunted quickly enough for it to matter:

Huntsman would need a late surge in New Hampshire, catching Paul in second place, thus giving him momentum to pull moderate votes from Romney going forward. Santorum and Gingrich would have to do poorly in New Hampshire and totally collapse in South Carolina so that Perry could come back from his current single digits there to win the Janaury 21st primary. Or, Gingrich and Perry would have to sink in South Carolina, allowing Santorum to win. And perhaps we’d have a Romney, Huntsman and Perry (or Santorum) race heading into Florida and beyond.

All of that seems very unlikely at this point. There’s one poll [PDF] out this morning that appears to show some tightening in the Granite State, but its a tracking poll, which tend to overstate trends because of the way they measure voter preferences, so there’s ever reason to believe at the moment that Romney is still the prohibitive favorite and nobody is likely to come close to him. Ron Paul seems likely to come in second but New Hampshire is likely the end of his ride near the top of the polls. Huntsman may have a shot at overtaking Paul for second place, but even if he does I’m not sure that it will matter much in the end. The odds still seem pretty good that Huntsman’s campaign will end shortly after Tuesday night even though he should be, as James Joyner notes this morning, the future of the GOP.  Santorum, Gingrich, and Perry all seem to be fading fast in the Granite State (in the tracking poll, Perry is coming in behind Buddy Roemer as a matter of fact) and would be well advised to minimize the resources the spend in the Granite State over the next 48 hours.

In the end, Romney won this debate because, as Jazz Shaw notes in his wrap-up of both of this weekend’s debates, he came off the stage unbloodied. But isn’t that how these debates always turn out? Looking back, I can recall only one debate where Romney seemed to be off his game and, while it was followed by the Gingrich surge in December, there’s no real indication that it hurt him to any significant degree. Those mistakes came in a debate that really didn’t matter, though. So far, in the two debates that are most likely to have an impact on the decision people make as they head into a voting booth, Mitt Romney came across as cool, competent, and ready to be President. The attacks he took this morning, while more pointed than he’s seen in the past, seem unlikely to have any real impact either in New Hampshire or elsewhere.

The time within which the “Not Romney’s” can make their move is shrinking quickly. For many of them, it’s probably already passed. If this morning was the best they had, then Romney handled it very well and he’s got nothing to worry about.