Seven Of The Ten Wealthiest Counties In The U.S. Are In Washington, D.C. Area 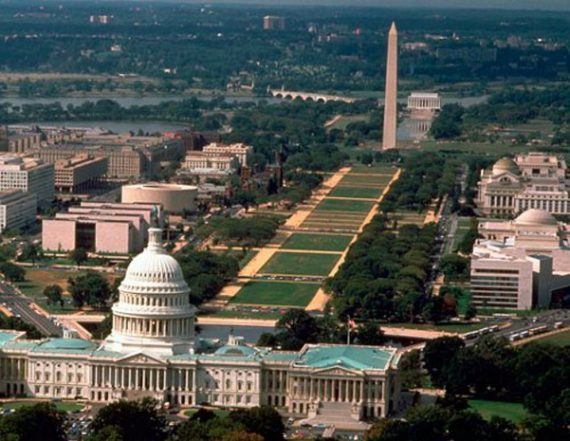 If you live in the Washington, D.C. area, the odds are that you’ve been far more shielded from the impact of the Great Recession than residents of many other parts of the country. That is due, obviously, in no small part to to the presence of the Federal Government and the various businesses that have grown up to provide services to the government, or to influence it to move policy in a certain direction. While Washington, D.C. proper hasn’t necessarily benefited economically, its Maryland and Virginia suburbs most certainly have:

The Washington region has emerged from the recession looking even more affluent compared with the rest of the country, boasting seven of the 10 counties with the highest household incomes in the nation, new census numbers show.

With a median household income surpassing $119,000, Loudoun County heads the list. Fairfax County, at nearly $106,000, is second. Both have held the same positions for several years running.

More surprising, Arlington County leapfrogged from the fifth spot to third, with a median household income of almost $101,000, a $6,000 gain in one year. Four in 10 households in the county are single person, leaving Arlington with a relatively small share of residents whose affluence comes from two incomes, compared with Loudoun and Fairfax.

Other counties in the top 10 are Howard, Prince William, Fauquier and Montgomery, which had dropped out of it in 2010. Among states, Maryland has the nation’s highest household income level, and Virginia is ninth.

The rankings in the 2011 American Community Survey released Thursday expand Washington’s dominance among high-income households, reflecting a regional economy that was largely cushioned as the recession yanked down income levels elsewhere. Household incomes rose in most counties around Washington last year, even as they continued to sink around the country.

The stability of an economy built on the pillars of the federal government, its legions of contractors and a flourishing high-tech sector is evident in the income rankings.

In 2007, before the recession began, five counties in suburban Washington made it into the top 10. By 2010, there were six. The seven in the latest ranking is an all-time high.

“It’s not only that we have low unemployment and a lot of dual-income ,” said Stephen Fuller, director of the Center for Regional Analysis at George Mason University. “We lost a few government jobs, but not the high-paying, professional business-service jobs that are still growing, if not as fast as they used to. Since the rest of the country is in such poor shape, we just have to show a little bit of growth here, and we look pretty good.”

The District, which the census compares to both states and counties, has seen its ranking shoot up in the last five years as its median household income has risen from $54,000 to about $63,000. When compared with states, it rose from 16th to fifth. Compared with counties, it ranks 125, up from 247.

This gives a bit of a sense of how economically disconnected the nation’s capitol city is from much of the rest of the country. It also highlights how much money is flowing into the Washington area, where the economy is largely built around supporting the functions of the federal government. And it tells you something about where American businesses invested during the recession: in political influence and power. Which reveals who actually benefits from economic recovery measures and massive regulatory overhauls. When Washington’s power grows, so does the value of K Street, and, in turn, so do real-estate prices in the surrounding area.

That pretty much sums it up, I would say. There’s something not entirely healthy with so much wealth being tied up in something that is ultimately as economically unproductive as government influence pedaling and rent seeking, and it certainly doesn’t bode well for our economy that Suburban Maryland and Northern Virginia have essentially gotten rich by sucking money from the rest of the country via taxation. This is an unsustainable situation because, at some point, someone has to do the productive work necessary to pay those taxes.