Should Jon Huntsman Be Considered A Contender?

On paper, Jon Huntsman looks like a great General Election candidate. The problem is it seems impossible for him to win the GOP nomination. 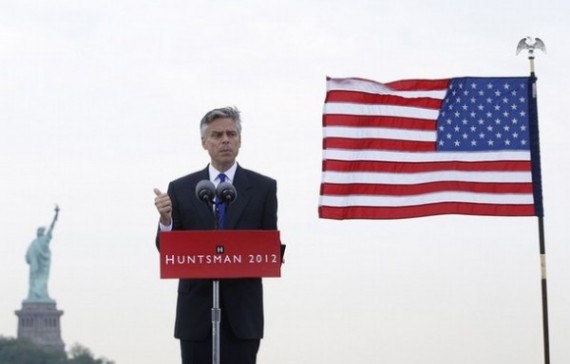 Over at The Daily Caller Liz Mair seeks to pour a little bit of cold water on the belief that seems to be widespread among Republicans that the likelihood that the economy will still be in bad shape in 2012, and that the economic pessimism we’ve seen in several recent polls will still exist, means that they need not worry so much about who wins their nomination fight:

With the 2012 presidential race now underway, and the Republican field largely set, Obama has two major, related liabilities: The economy and the general sense of the direction of the country. He also has a number of assets: Americans like him (if not his policies); recent polling shows him scoring better on foreign policy and national security matters than on the economy; he is likely to have a very large campaign war-chest; the RNC remains in financially dire straits, and Democratic-aligned third-party groups will play in the 2012 race just as Republican-aligned groups will. Obama will do a better job than most, perhaps all, Republican candidates in leveraging technology to boost his campaign. Perhaps most importantly, he is the incumbent. To what extent any of these factors proves overwhelming, or irrelevant, depends not just on the unemployment rate, but also greatly on whom Republicans nominate.

Like Obama, each Republican contender has assets and liabilities that they will bring to the table, and which will significantly affect the outcome of the race.

Mair then goes on to identify four candidates (well actually three declared candidates and one possible candidate) which she considers to be the true contenders for the GOP nomination – Mitt Romney, Tim Pawlenty, Jon Huntsman, and Rick Perry. Right off that bat, of course, this list will likely tick off supporters of candidates like Michele Bachmann and Herman Cain, and potential candidates like Sarah Palin but she’s right to exclude them. Bachmann and Cain are candidates that appeal to one segment of the GOP base. They both have the potential to do well in Iowa and possibly South Carolina, but, beyond that, I simply cannot see them competing in big primary states like California, Texas, New York, Pennsylvania, Ohio, and New Jersey. As for Palin, she’s showing all the signs of not running but, even if she did, the fact that she is incredibly unpopular outside the GOP would mean that any Republican who actually wants to win in November 2012 would end up rallying behind the most credibly alternative, most likely Mitt Romney.

Much has been written here at OTB about the strengths and weaknesses of  Romney, Pawlenty, and even Perry, but Liz”s decision to put Huntman in the top tier of candidates surprises me. Here’s what she says:

Former Utah Gov. Jon Huntsman has, since before his appointment as ambassador to China, been the prospective contender the Obama camp has reportedly been most worried about, with campaign manager David Plouffe saying in 2009 that Huntsman makes him “a wee bit queasy.” Of course, some parts of the Republican base might take a similar view, unnerved by Huntsman’s more moderate profile and quick transition from ambassador to China to Obama opponent, which might diminish enthusiasm for phone-banking, door-knocking, and other essential volunteer activity in some quarters should he win the nomination.

Huntsman also has a record in business, which is potentially exploitable in view of voter angst about unemployment numbers. Huntsman’s business connections could enable him to finance a tough, expensive campaign (which he does not plan to pay for out of his own wealth) and bolster arguments that he knows how to create jobs. As a Republican nominee, the Utahan might run a more attention-grabbing, earned-media dominating campaign than other Republicans or indeed Obama (see ads created by Huntsman adviser Fred Davis), which could minimize the impact of advantages Obama might otherwise have. Huntsman has also done smart things from a new media standpoint, and that will help. In the event that a major national security event occurs in the run-up to November 2012, and if Obama missteps or voters’ priorities shift, Huntsman could clean up. Bill Clinton benefited when the 1992 election became focused on “the economy, stupid” and George H. W. Bush’s leadership in the context of the Gulf War was disregarded as yesterday’s news. In 2012, that scenario could occur in reverse.

All of this looks really good, but the question that I’ve never been able to get an answer to from anyone who talks positively about Hunstman is, what is his path to the nomination? He’s currently at the bottom of the polls, usually sharing last place with either Gary Johnson or “undecided,” or both. He’s already announced that he will be skipping the Iowa Caucuses and concentrating on New Hampshire. The problem for Huntsman in the Granite State is that Mitt Romney has basically spent the last four years building up relationships in that state, and he currently looks like the prohibitive frontrunner there. Would New Hampshire Republicans looking for an alternative to Romney really turn to Huntsman, or would they turn to Pawlenty, who is likely to do well in Iowa if not win it outright? And, if Huntsman doesn’t core some kind of surprise showing in New Hampshire, he would seem to be in the same position that Rudy Giuliani was after Florida, a candidate with no place to go.

Nate Silver, who does not consider Huntsman a top tier candidate maps out this path to victory for the former Utah Governor:

1. Both Mr. Romney and Mr. Pawlenty perform poorly enough in Iowa (a state over which Mr. Huntsman has no direct control) for their candidacies to lose momentum.

2. Mr. Huntsman is in a strong enough position in New Hampshire that he can surge to victory there as Mr. Romney’s and Mr. Pawlenty’s numbers decline.

3. Mr. Huntsman, having won New Hampshire, wins the “playoff” against the conservative winner of Iowa (say, Mr. Perry or Ms. Bachmann) and a candidate like Mr. Romney who is wounded but not necessarily dead (particularly given the ideological gulf between Mr. Huntsman and the Iowa winner).

Possibly? Certainly. Likely? I don’t think so. Maybe Huntsman will surprise me, but I can’t see him getting out of the bottom of the field.

The broader point that who the GOP nominates, though, is most emphatically true. Even with a weak economy, it seems difficult to believe that a Bachmann, Cain, Santorum, Gingrich, or Palin could beat an incumbent President who retains a high degree of likeability among voters. Perhaps Huntsman could beat Obama in a General Election, I just don’t see how he gets the nomination.