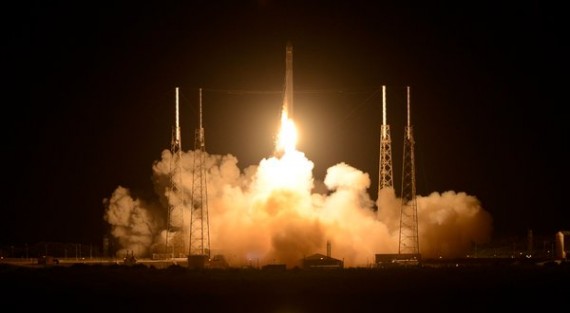 After two false starts, the most recent being just last week when an engine sensor caused a launch abort at the very last second, SpaceX succeeded with a launch that promises open an entirely new era of commercial development of space travel:

CAPE CANAVERAL, Fla. — A private cargo rocket headed to the International Space Station blasted off early Tuesday morning. Built by Space Exploration Technologies Corp. of Hawthorne, Calif. — commonly known as SpaceX — this rocket is carrying only about 1,000 pounds of cargo, and nothing of great value. The importance is instead technical and symbolic.

If the cargo capsule makes it all the way to the space station, it would be the first commercial, rather than government-operated, spacecraft to dock at the space station, and it would mark an important step in NASA’s efforts to turn over basic transportation to low-Earth orbit to the private sector.

With success of this flight, SpaceX would begin a $1.6 billion contract to fly 12 cargo missions to the space station. This SpaceX launching followed the same pattern of two earlier ones where a last-minute glitch halted the countdown on the first try and then the rocket went off without a hitch on the second try. In an aborted liftoff on Saturday morning, the nine engines of the 157-foot tall Falcon 9 rocket had already ignited before computers shut them down because of high pressure in the combustion chamber of the center engine.

By the end of the day, technicians had found a faulty valve and replaced it. On Sunday, Elon Musk, SpaceX’s chief executive, posted on Twitter that all would have been fine if the Saturday launch had gone forward. “Simulations show launch ok with bad valve,” he said. “Still, better to stop & fix. Recalling rockets after launch is not an option.”

SpaceX had to wait until Tuesday at 3:44 a.m. for the space station’s orbit to line up with the launching pad, enabling the capsule to be launched on a trajectory trailing the station. This time as the countdown clock hit zero, the engines remained ignited and the Falcon 9 arced upward into the night sky. Less than 10 minutes later, the cargo capsule, known as the Dragon, was in orbit.

The next big test comes on Thursday when Dragon will  hopefully be caught by the I.S.S.’s robotic arm. After the capsule is retrieved, the minor equipment it is carrying will be off-loaded and it will be loaded with material that the station is returning to Earth. If all goes well, the U.S. will have a way to supply the station without having to rely on the Russians.