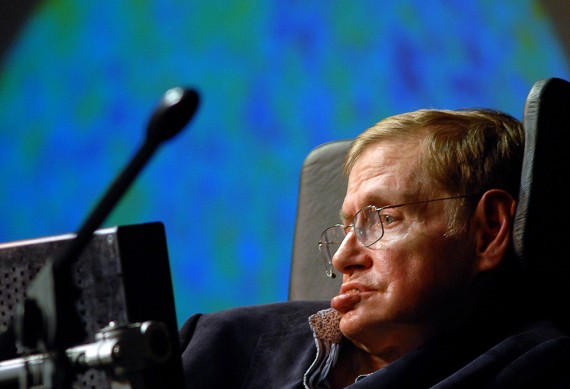 Well this one liable to ignite some controversy:

A belief that heaven or an afterlife awaits us is a “fairy story” for people afraid of death, Stephen Hawking has said.

In a dismissal that underlines his firm rejection of religious comforts, Britain’s most eminent scientist said there was nothing beyond the moment when the brain flickers for the final time.

Hawking, who was diagnosed with motor neurone disease at the age of 21, shares his thoughts on death, human purpose and our chance existence in an exclusive interview with the Guardian today.

The incurable illness was expected to kill Hawking within a few years of its symptoms arising, an outlook that turned the young scientist to Wagner, but ultimately led him to enjoy life more, he has said, despite the cloud hanging over his future.

“I have lived with the prospect of an early death for the last 49 years. I’m not afraid of death, but I’m in no hurry to die. I have so much I want to do first,” he said.

“I regard the brain as a computer which will stop working when its components fail. There is no heaven or afterlife for broken down computers; that is a fairy story for people afraid of the dark,” he added.

In the interview, Hawking rejected the notion of life beyond death and emphasised the need to fulfil our potential on Earth by making good use of our lives. In answer to a question on how we should live, he said, simply: “We should seek the greatest value of our action.”

In answering another, he wrote of the beauty of science, such as the exquisite double helix of DNA in biology, or the fundamental equations of physics.

Hawking responded to questions posed by the Guardian and a reader in advance of a lecture tomorrow at the Google Zeitgeist meeting in London, in which he will address the question: “Why are we here?”

In the talk, he will argue that tiny quantum fluctuations in the very early universe became the seeds from which galaxies, stars, and ultimately human life emerged. “Science predicts that many different kinds of universe will be spontaneously created out of nothing. It is a matter of chance which we are in,” he sa

Well I supposed Hawking is probably glad that he isn’t living during the times of Galileo Galilei.