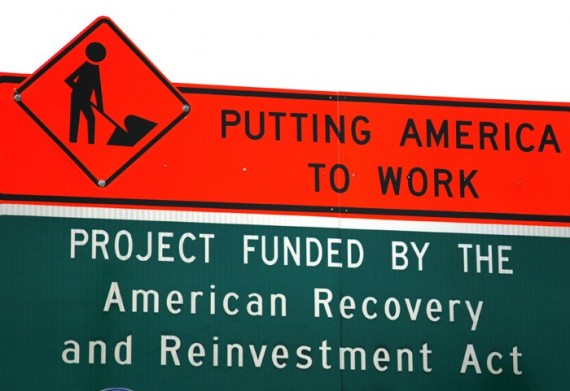 Economists Timothy Conley and Bill Dupor are out with a study (PDF) on the impact of the $800 billion stimulus package passed in the early months of the Obama Administration:

Our benchmark results suggest that the ARRA created/saved approximately 450 thousand state and local government jobs and destroyed/forestalled roughly one million private sector jobs. State  and local government jobs were saved because ARRA funds were largely used to offset state revenue shortfalls and Medicaid increases rather than boost private sector employment. The majority of destroyed/forestalled jobs were in growth industries including health, education, professional and business services. This suggests the possibility that, in absence of the ARRA, many government workers (on average relatively well-educated) would have found private-sector employment had their jobs not been saved. Searching across alternative model specifications, the best-case scenario for an actual ARRA has the Act creating/saving a net 659 thousand jobs, mainly in government.

Moreover, the study suggests that most of the funding from ARRA was used by states to avert their own budget crises rather than fund new projects:

A large fraction of the Federal ARRA dollars was channeled through and controlled by state and local governments.4 This is important for two reasons. First, it opens the possibility that states might receive direct ARRA allocations due in part to exogenous capacities to channel or attract Federal funding. Approximately two-thirds of all ARRA spending is formulary, of which there is substantial exogenous state-level variation in formula `parameters.’

Second, channeling through states creates an environment where Federal dollars might be used to replace state and local spending. The Act legislated ARRA funds to go to state and local governments for specific programs, such as schools in high poverty neighborhoods and highway construction. Importantly, as depicted in Table 1, states and local governments were already spending significant amounts of their own dollars on many of these programs before the ARRA.Often state spending was substantially higher than nominally targeted ARRA funding.

Upon acquisition of ARRA funds for a specific purpose, a state or local government could cut its own expenditure on that purpose. As a result, these governments could treat the ARRA dollars as general revenue, i.e. the dollars were effectively fungible.

Economists such as Paul Krugman have suggested that the problem with the stimulus is that it wasn’t big enough (even though there’s no record of Krugman criticizing the size of the package while it was being debated in Congress) but this suggest that the entire plan was fundamentally flawed in the manner that funds were allocated. It would have been better, it seems it would have been better to just give the money directly to the people. Or, you know, not spend it at all.

Finally, this chart shows the extent to which the manufacturing and goods-producing failed to benefit at all from the stimulus: 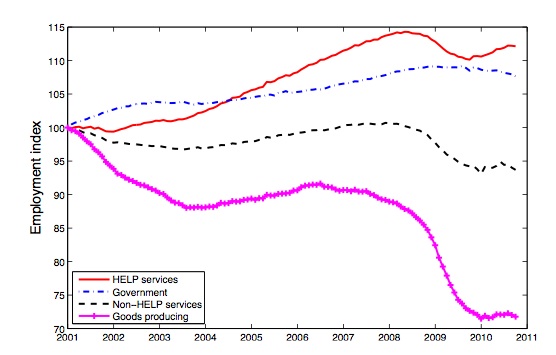 The authors defined “HELP Services” as health and education, leisure and hospitality and business and professional services and its no surprise they’ve done well, as has the government sector. But manufacturing? The lifeblood of the economy? It didn’t benefit at all and it is, as the unemployment figures can attest, still largely stagnant.

The stimulus was, in other words, a monumental failure.