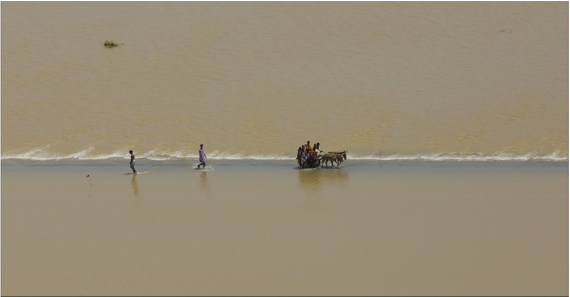 The task of getting aid to the millions of Pakistanis affected by this year’s flooding may have gotten more difficult:

The UN is reviewing security measures for its aid workers in Pakistan, after a warning of new threats from the Pakistani Taliban.

A US official said militants planned to attack foreigners delivering aid to the millions of people affected by the devastating floods in the country.

One Taliban spokesman told Associated Press that the presence of foreign aid workers was “unacceptable”.

On Wednesday, a US official, speaking on condition of anonymity, told the BBC that the militant group Tehrik-e Taliban Pakistan planned to “conduct attacks against foreigners participating in the ongoing flood relief operations in Pakistan”.

The official said the US government also believed “federal and provincial ministers” may be at risk, but gave no further details of the source of the information.

A World Health Organization spokesman said that aid work in Khyber-Pakhtunkhwa and Baluchistan was already being affected by security concerns.

“Now with this threat it means either we have to downsize the operation – which means less access to the affectees – otherwise we have to take more mitigation measures in order to reduce the security risk, which means more resources,” Ahmed Farah Shadoul said.

“This will definitely delay the operation in certain areas.”

Earlier, US Gen Michael Nagata said his forces had seen no threats to their security in the three weeks that they had been operating in Pakistan, during which their fleet of 19 helicopters had helped save more than 6,000 people.

But on Thursday afternoon, Tehrik-e Taliban spokesman Azam Tariq said it believed the United States and other countries were not focused solely on providing aid to flood victims, and had other unspecified “intentions”.

“No relief is reaching the affected people, and when the victims are not receiving help this horde of foreigners is not acceptable to us at all,” he told AP.

“When we say something is unacceptable to us one can draw his own conclusion,” he added, in an apparent threat.

The goal of the Taliban would seem to be to disrupt the aid in an effort to undercut any good will that the US or other Western nations might gain from assisting in the recovery efforts, although I’m sure that the additional “benefit” of increased chaos in the affected areas hasn’t escaped their thoughts either.

More importantly, though, the truth about the floods is that the worst is yet to come:

The situation in the south in 10 times worse, they don’t have water, and diseases are spreading. Swat is different. They have water, but they lost everything.

And the worst is yet to come. At this time of the year they would be selling their fruit and vegetables, which would have been their income to see them through the winter. But all that is lost with the orchards and crops destroyed.

Their problems will come in the winter and they’ll last for the entire year. Some of them are so afraid of the water, that they have gone higher up in the mountains where they live in tents.

There’s someone in the south who travels to that village every five days or so. He keeps me updated about their situation. They are struggling to feed themselves. They are currently growing some vegetables, but they don’t have any pulses. They need flour and sugar and that’s what we are buying for them now.

Today we’ll be heading south where the river is joining the sea. There are fears of more floods in those areas and nobody knows how that will play out.

This is the biggest disaster in the world!

And, as with most disasters in remote parts of the world, it’s happening in silence.