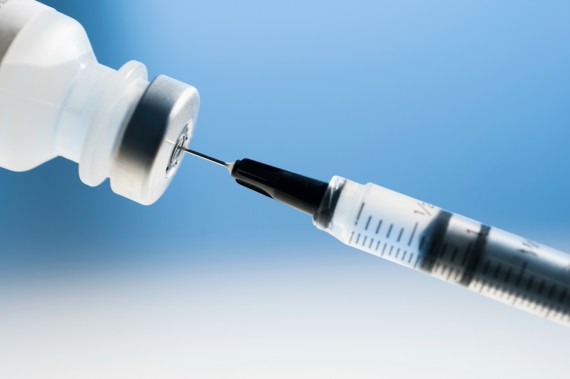 Once declared eradicated, the number of measles cases in the United States is already at a 20 year high in 2014, and the fact that fewer people are getting vaccinated is largely to blame:

Largely because of resistance to vaccination, cases of measles have reached a 20-year high in the United States, federal health officials said on Thursday.

As of May 23, there were 288 confirmed cases in the United States — more than in all of 2013, and more than in the equivalent period of any year since 1994. The number is expected to increase during the summer travel season.

“This is not the kind of record we want to break,” said Dr. Anne Schuchat, director of immunization and respiratory diseases for the Centers for Disease Control and Prevention.

The measles virus, which is highly contagious, usually causes only a fever and a rash. But it can lead to pneumonia, brain damage, deafness and even death. An unvaccinated American child who develops measles has about a one in 500 chance of dying, even with hospital care, according to the C.D.C.

Eighty-five percent of this year’s cases were in people not vaccinated because of religious, philosophical or personal objections, Dr. Schuchat said.

In an unusual twist, over half were ages 20 or older. They may have included adults whose parents refused to vaccinate them years ago, she said.

Forty-three of the 288 who contracted the virus were hospitalized, most with pneumonia. None died.

Almost half the cases were part of a continuing outbreak in Amish communities in Ohio that started with missionaries who had traveled to the Philippines, which is experiencing an outbreak that has caused 41 deaths.

There were 60 cases in California, mostly in the San Francisco Bay Area and in Orange County, where large numbers of wealthy parents refuse to vaccinate their children.

The third-biggest outbreak was in New York City, which registered 26 cases in February and March. It was concentrated in Upper Manhattan, and cases are believed to have spread in hospital waiting rooms because doctors and nurses did not promptly recognize the symptoms. At least two children that contracted the virus were from families that refused vaccines; seven were too young to be vaccinated.

This chart from Vox demonstrates just how dramatically measles cases have actually spiked:

I wrote about this earlier this year, when it seemed clear that we were indeed reaching a 20 year high in measles reports, and now that we’ve reached that point officially, the criticisms leveled at that time against the anti-vaccination movement seem to be all the more appropriate. Every parent who refuses to get their child vaccinated increases the risk that measles, or whopping cough, or any of the other number of childhood diseases that we had, for the most part, successfully eradicated at least in the developed world, manages to spread, most especially to people with compromised immune systems and children considered too young or too ill to receive the vaccinations in question as well as immigrants from nations where measles vaccination is not necessarily common. While 288 cases doesn’t seem like very much in a nation of more than 300 million people, the fact that there are any at all fourteen years after measles was thought to have been eradicated is a serious public health problem, and it’s one that was completely preventable.

Concerns about side effects from vaccination are, of course, well founded, and parents are right to question their children’s doctors about whether compliance with the recommended schedule of vaccinations is appropriate for their child. The problem is that most of what has become the anti-vaccination movement isn’t based on reasonable questions that we all ought to be asking medical professionals. It is instead based largely on pseudoscience and absurd rantings against technology by advocates who used that supposed “evidence” to scare well-meaning parents into thinking that the risks from vaccination are far higher than medical evidence actually tells us they are. The most famous of these lies, of course, was the assertion that there was a link between childhood vaccinations and autism that has since been entirely discredited and rejected by medical science. Before that happened, though, the myth of the vaccine-autism link spread around the world like wildfire and his given birth to a thousand irrational fears about something that is, in reality, one of the greatest public health achievements in human history, the effective irradication of childhood diseases that were once serious threats. When those lies are spread by celebrities such as Jenny McCarthy, Miyam Bialik, and Donald Trump, they are given an inappropriate air of credibility that makes debunking them far more difficult. As a result, we see stories like this one as well as others that have informed us of increases inthe number of reported cases of Whopping Cough and other diseases that are easily preventable.  The question is how much longer we’ll have to live with the consequences of pseudoscience and stupidity.