It was, perhaps, inevitable that someone would attempt to draw a comparison between Saturday's shootings in Arizona and the Oklahoma City bombing, but the two events really don't have anything in common. 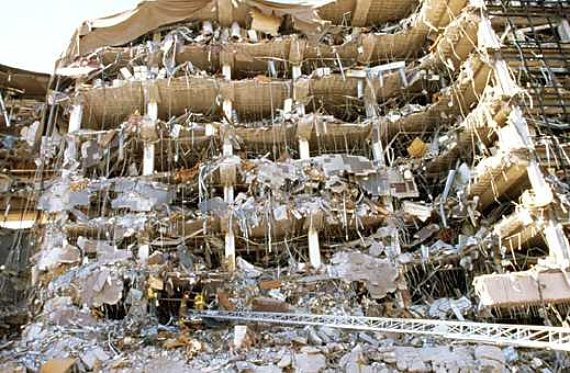 Within hours after the shootings in Arizona on Saturday, pundits were already drawing parallels between to the 1995 bombing of the Murrah Federal Building in Oklahoma City, and that comparison now seems to have become part of the political meme that the shootings have given birth to:

With only a sliver of information yet known about the motivations of Tucson shooter Jared Loughner, any lines drawn between the 22-year old gunman and Oklahoma City mastermind Timothy McVeigh are sketchy at best. But the similarities between the political climate of the mid 1990s and now seem plain.

The Oklahoma City bombing – the 15th anniversary of which was commemorated last spring — occurred not long after a wave election during which midterm voters rewarded Republicans who advocated for shrinking the role of the federal government. The bombing’s chief architect, former soldier McVeigh, railed against government intrusion in American life but was spurred to violence after the federal government’s siege of a white supremacist’s cabin in northern Idaho and a subsequent fatal raid of the Branch Davidian complex in Waco, TX.

“What is it going to take to open the eyes of our elected officials? America is in serious decline!” McVeigh wrote in a 1992 letter to a New York newspaper.

Similar sentiments were not in short supply. Between late 1992 and October 1995, citizens’ faith in their government had sunk to an all time low, with no national poll finding over 28 percent of respondents saying that they trusted federal authorities.

The lowest point in that era – a Gallup poll in April 1994 finding only 17 percent of Americans saying they trust the government — was matched in 2008, and trust remains at historic lows among Republican voters today.

National sentiment about the Democratic president reflected that discontent. President Bill Clinton’s approval ratings languished well below 50 percent in early April 1995, and, just one day before the Oklahoma attack, the president struggled to argue that he was still “relevant” after the midterm backlash the previous November.

Post-“shellacking” – Obama’s chosen word for the beating Democrats took in the 2010 election – the president’s approval ratings remain similarly stuck in the mid-40s.

Just because there are similarities between the political climate in 1995 and the political climate today, however, doesn’t mean that the shootings in Tuscon implicate the same political issues that the Oklahoma City bombing did.  Timothy McVeigh was a child of a movement that came to light in the early 1990s, but which probably existed in one form or another long before then. The so-called “militia movement” took its inspiration from neo-Nazis, the Klan, conspiracy theorists on everything from the JFK assassination to the moon landing, and it tapped into the general anti-government sentiment that came into being in the early years of the Clinton Administration. What lit the fire for men like McVeigh, though, was the siege at the Branch Davidian compound in Waco, Texas and its disastrous end on April 19, 1993. That date already had significance in the “Patriot” movement because it was the anniversary of the Battle of Lexington & Concord, the spark which gave birth to the American Revolution. To these people, the FBI’s bungled raid in Waco was evidence of a government conspiracy, and the Internet of the early 90s was fully of conspiracy theories and “grand jury proceedings” purporting to indict Janet Reno and Bill Clinton for murder. It was no mistake that McVeigh and Terry Nichols chose the date and location that the did, because the Murrah Building served as the headquarters for the FBI team that was involved in the final raid at Waco.

There was then, at least an argument that could be made in 1995 that the tenor of anti-government rhetoric online and on talk radio (it’s worth noting that neither MSNBC nor Fox News Channel existed at the time) had contributed to the climate that made Oklahoma City possible. That’s not the case this time. There’s no evidence that Jared Lee Loughner was part of any organized political group of any kind. His political views in recent years appear to be a  mixture of far left, far right, and conspiracy theories. Rather than Fox News Channel, he seems to be the type of person who got his news, and formed his beliefs, based on what can be obtained from “alternative” news sources such as Art Bell’s old radio show or websites like Prison Planet at Above Top Secret, where Loughner apparently had an account. There’s anecdotal evidence that he is, at least in some sense, mentally disturbed.Finally, it’s becoming clear that this individual had some kind of obsession with Giffords that stretches back to 2007, long before the current political climate came into existence. So, as I argued here yesterday, there really aren’t any political lessons to be drawn from this event.

That isn’t stopping people from trying to do so, of course, and perhaps the most offensive manner in which that is happening is the speculation that is occurring about how President Obama might be able to benefit politically from the cold-blooded murder of six people by a lunatic:

Of all the unfulfilled campaign promises President Barack Obama made in 2008, the one that bothers the president most isn’t any squandered policy priority – it’s his failure to re-civilize what he views as an increasingly savage partisan climate.

Obama idolizes Lincoln, and like his fellow Illinoisan he sees himself as a warrior by compulsion, forced by circumstance to take up arms against political adversaries instead of following his preferred path of reconciliation, civility and compromise.

In that regard, the shootings in Tucson on Saturday, which he has decried as a “national tragedy,” present a critical opportunity to a president at a crossroads, a chance for Obama to elevate the debased tenor of politics, much as President Bill Clinton attempted in the aftermath of the 1995 terrorist attack in Oklahoma City.

Of all the unfulfilled campaign promises President Barack Obama made in 2008, the one that bothers the president most isn’t any squandered policy priority – it’s his failure to re-civilize what he views as an increasingly savage partisan climate.

Obama idolizes Lincoln, and like his fellow Illinoisan he sees himself as a warrior by compulsion, forced by circumstance to take up arms against political adversaries instead of following his preferred path of reconciliation, civility and compromise.

In that regard, the shootings in Tucson on Saturday, which he has decried as a “national tragedy,” present a critical opportunity to a president at a crossroads, a chance for Obama to elevate the debased tenor of politics, much as President Bill Clinton attempted in the aftermath of the 1995 terrorist attack in Oklahoma City.

One anonymous Democrat was even more blunt about what he wanted to see the President do in the wake of this tragedy:

One veteran Democratic operative, who blames overheated rhetoric for the shooting, said President Barack Obama should carefully but forcefully do what his predecessor did.

“They need to deftly pin this on the tea partiers,” said the Democrat. “Just like the Clinton White House deftly pinned the Oklahoma City bombing on the militia and anti-government people.”

Another Democratic strategist said the similarity is that Tucson and Oklahoma City both “take place in a climate of bitter and virulent rhetoric against the government and Democrats.”

The naked cynicism of this kind of analysis cannot be understated. People like this aren’t concerned with actually discovering what might have caused Jared Lee Loughner to go off his rocker and kill 6 people while wounding 14 others. If they were, they’d be talking about the horrible state of mental health care in this country and the fact that, to a large degree, it is still considered a stigma in many quarters to even seek treatment for problems like depression and schizophrenia. They aren’t even worried so much about the people who actually died except to figure out how they can use their bloody corpses to advance their political aims. As Nick Gillespie writes at Reason today, if you want to find something wrong with America today, it would be better to look at the reaction to Saturday’s events:

The problem isn’t with the current moment’s rhetoric, it’s with the goddamn politicization of every goddamn thing not even for a higher purpose or broader fight but for the cheapest moment-by-moment partisan advantage. Whether on the left or on the right, there’s a totalist mentality that everything can and should be explained first and foremost as to whether it helps or hurt the party of choice.

This isn’t exclusively a left wing phenomenon, because conservatives do it too. Every event, every tragedy, everything that happens is analyzed through partisan blinders and each side determines what the “right” and “wrong” position is. The fact that their analysis often has very little to do with reality doesn’t seem to occur to, or bother, them. In this case, the media is making the comparison to Oklahoma City not because it’s true, but because it fits into the approved talking points this time around.