Nicola Sturgeon, leader of the Scottish National Party, could hold the key to the future of Britain in her hands after the election ends on May 7th. 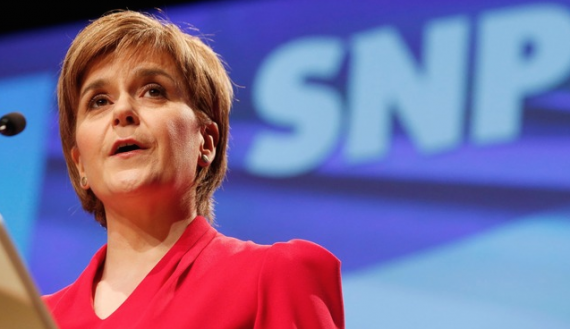 The most powerful party in determining at least the short-term political future of the United Kingdom may be someone who isn’t even standing for election on Thursday:

ST. ANDREWS, Scotland — Nicola Sturgeon was late for her burgundy helicopter. It had taken her 45 minutes to traverse the 50 yards between the medieval church and the high street — and not just because of her perilous-looking designer heels.

Ms. Sturgeon, the leader of Scotland’s semiautonomous government, was campaigning for her Scottish National Party before Britain’s election on Thursday, and the reception, by the standards of British politics, was rapturous.

Teenagers screamed. Supporters wearing “I’m with Nicola” badges shouted her first name. Half a dozen schoolgirls had skipped class for the occasion and patiently lined up to take selfies. A grandfather wanted an autograph on his new party membership card. (“My whole family has joined, three generations,” he said proudly.)

Then a man with a distinctly English accent approached. “I’m a fan from London,” he told her. “I wish I could vote for you.”

This affluent university town, where Prince William and Kate Middleton studied, has never elected a parliamentary candidate from the left-leaning separatist Scottish National Party, or S.N.P., in a general election. But this week, along with most of Scotland, it seems likely to do so.

Ms. Sturgeon, a 44-year-old feminist from the working-class county of Ayrshire in southwest Scotland who wants to lock the Conservatives out of power, rid Britain of itsnuclear weapons and end austerity measures, has drawn the spotlight in the election campaign — and she is not even running for Parliament herself.

But if the opinion polls are to be believed, she is all but certain to emerge from the general election as a national political force, leading the party with the third-largest representation in the British Parliament in Westminster and ending the long-running dominance of the Labour Party in Scotland.

Barely known in England until she took over the S.N.P. after the Scottish referendum last year, she gained prominence after a series of televised debates for party leaders over the past few weeks. In one exchange, she challenged the head of the populist U.K. Independence Party, Nigel Farage, after he blamed immigrants for a housing crisis.

Immigrants “make a net contribution to our country,” she told Mr. Farage. “So if we can maybe just put the boogeyman to one side, we can actually debate these issues for real and in substance,” she continued, drawing thunderous applause from the audience.

“You are, yes” Ms. Sturgeon retorted, to more cheers.

“Whatever the outcome, the winner of this election is called Nicola Sturgeon,” said David Torrance, the author of her newly published biography.

Opinion polls suggest that the S.N.P., which has only six seats in the British Parliament, could win at least 45 of the 59 seats representing Scotland. That could be enough to give Labour a majority — if the two parties are willing to work together.

Mr. Miliband has so far ruled out a formal coalition, suggesting that he would expect the S.N.P. to support his agenda in Parliament. Despite deep divisions over specific policies like nuclear disarmament and Scottish separatism, the two parties have similar economic platforms.

But as she made a dash for her campaign helicopter — Ayr Force One some here call it — Ms. Sturgeon said that Labour could not be trusted to make Britain a fairer country. “We can bring an influence to bear on Ed Miliband and a Labour government to make them more progressive,” she said in an interview.

“There is as much of an appetite for political change in England as there is in Scotland,” she continued. “Much of the feedback that I’ve had from people south of the border has been, ‘We wish we had the option of a party like the S.N.P.’ The fact that neither Labour nor the Tories are ahead in the polls reflects the fact that people think they haven’t got much of a choice.”

The right-leaning tabloid The Daily Mail has called her “the most dangerous woman in British politics.” Mr. Cameron has describeda possible coalition between Mr. Miliband and Ms. Sturgeon as “a match made in hell.” The Conservative mayor of London, Boris Johnson, likened her to a scorpion and said that allowing the S.N.P. into a coalition government would be like putting King Herod in charge of a baby farm.

One Conservative campaign poster shows Mr. Miliband peaking out of Ms. Sturgeon’s pocket. Another has her as his puppet master.

Ms. Sturgeon shrugs off the vitriol. “People only try and shoot at you if you’re worth shooting at,” she said, pointing out that the S.N.P. has been in government in Scotland since 2007 and that, unlike Mr. Cameron, it won an outright majority in 2011. “If the S.N.P. wasn’t doing well, nobody would be bothering about us.”

In the meantime, every English insult seems to make her stronger in Scotland.

“Every time David Cameron or Ed Miliband say something stupid, there is a surge in party membership,” said Heather McLean, 59, a former Labour voter from Dundee who joined the S.N.P. during the campaign for independence. “And they do that quite a lot, you know, say something stupid.”

Perhaps the most interesting thing both about Sturgeon’s rise to power and the SNP’s surge from a party holding six seats at Westminster to one that could hold nearly sixty by the time the ballots are counted Thursday night or Friday morning is the fact that it came after what most outside observers would consider the party’s most significant defeat. Last September, voters in Scotland narrowly rejected an independence referendum that had been a cornerstone of the SNP’s platform for years, and for which it had campaigned for aggressively while the Tories and Labour, and to some extent the Royal Family, united in opposition to ending the union that had become in 1707. Sturgeon’s predecessor, Alex Salmond, who had been the face of the independence campaign, resigned as party chairman shortly after the defeat, and Sturgeon was selected as his replacement as a party conference shortly thereafter. Despite those seeming setbacks, the SNP stands on the eve of a political triumph that will give it near-complete control of Scotland, and potentially a deciding voice in now the United Kingdom is governed going forward.

Now, Sturgeon stands as the leader of the political party that very well could have as profound an impact on the future of the British Isles as the independence referendum would have had it passed last September. As I noted last week, current polling and projections indicate that neither Labour nor the Conservatives will end up with a governing majority on their own at the end of the day on May 7th. This happened five years ago, of course, and it led to the coalition between the Tories and Liberal Democrats that has managed to remain stable for the entire time it has been in office. This time around, though, it seems clear that neither of the two major parties will even come close to the 306 seats that the Conservatives came away with in 2010. While it fell short of the 326 seats needed for a majority, the party had a large enough lead that it could credibly claim the right to make the first attempt at forming a majority, which led to the alliance with the Liberal Democrats.

If the projections are right this time, neither major party will come anywhere close to that number, however Labour would arguably have the easiest math to get to 326 merely be making an alliance of some kind with the SNP, and that’s where Sturgeon enters the picture. As the leader of her party, she would obviously be the person most directly involved with David Millband regarding the terms of whatever agreement the parties might enter into, and many have speculated that she would use this as an opportunity to extract concessions from Labour for even greater autonomy for Scotland and, perhaps even another referendum. As I noted, that would bring into play many of the same constitutional problems that people feared during the run-up to the September referendum.

It’s possible that the  United Kingdom could dodge this bullet, of course. The Tories could end up doing better than the polls are indicating and end up with enough seats to form another coalition government, although that may depend as much on the fortunes of the Lib Dems as it does on the fortunes of the Tories. Sturgeon could end up not being as demanding in discussions with Labour as some are fearing, although that sounds a lot like wishful thinking to me. Theoretically at least, Labour could attempt to govern as a minority government and govern that way, but that’s not likely to be very stable going forward and we could end up with another round of elections before 2015 comes to an end. The more one looks at the numbers, though, the more it looks like Nicola Sturgeon is going to end up being the person in the driver’s seat when the dust settles.

Scotland May Try For Another Independence Vote