The nominations of Mike Pompeo and Gina Haspel could be in trouble in the Senate. 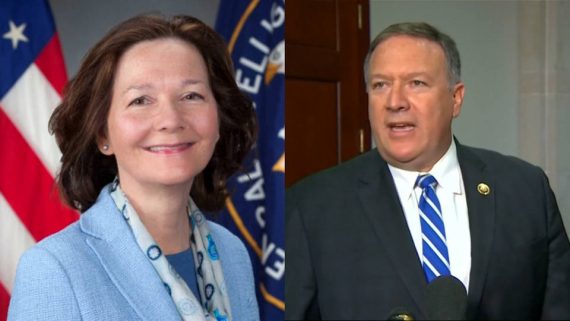 It was just yesterday that President Trump dismissed Rex Tillerson as Secretary of State via Twitter and named current C.I.A. Director Mike Pompeo as his successor while naming Gina Haspel, who currently serves as Deputy Director of the C.I.A, to replace Pompeo as head of the C.I.A., but it already looks like both nominations could face potential trouble in a floor vote:

Sen. Rand Paul (R-Ky.) announced Wednesday that he would vote against confirming Mike Pompeo as the next secretary of state and Gina Haspel as CIA director, becoming the first GOP senator to break with President Trump over the nominees.

In opposing the nominations, Paul pointed to Pompeo’s hawkish stance on Iran, stating that he “cannot endorse [Trump’s] nomination of people who loved the Iraq War so much that they want an Iran War next.”

Pompeo and Haspel, he continued “want to manipulate the president into the sphere of the neocons who never met a war they didn’t want to star in.”

Paul has long campaigned against foreign engagements, including wars — a position that often puts him at odds with the Republican Party. Paul said Wednesday that he had supported Trump because he thought he would break with the tradition of past Republican presidents and correct “the foreign policy mistakes of the last two administrations.”

“Yet now he picks for secretary of state and CIA director people who embody them, defend them and, I’m afraid, will repeat them.”

Several Democrats criticized Trump’s choices of Pompeo, saying that Pompeo’s hawkish positions and seeming willingness to bend facts as CIA director — such as saying the intelligence community had determined that Russian meddling had no effect on the outcome of the 2016 election — made him unsuitable for the role of top diplomat.

Though 14 Democrats voted to confirm Pompeo as CIA director last year, many of them said Tuesday that they were reconsidering their support, based on Pompeo’s tenure as CIA director.

Many Democrats also criticized Haspel’s record supervising a secret CIA prison that engaged in “enhanced interrogation techniques,” commonly referred to as torture, and later helping destroy videotaped evidence of the procedures. Those episodes should disqualify her as a potential CIA director, they said.

Paul’s vote is important, of course, because the Republican majority in the Senate is already at the razor-thin margin of 51-49. This means that Senate Majority Leader Mitch McConnell can afford to lose only one Republican on each nomination before he would need Democrats to cross over the aisle to vote for either Pompeo or Haskel. McConnell’s position is further made difficult by the fact that Mississippi Senator Thad Cochran is currently set to leave the Senate effective April 1st and it’s unclear how long it will be before that state’s Republican Governor names an interim Senator to replace him until a Special Election can be held in November to select the person who will serve the remainder of Cochran’s current term, which expires in 2020. Additionally, yesterday Arizona Senator John McCain released a statement condemning Haspel’s role in the C.I.A.’s use of overseas black sites to interrogate and torture suspected terrorists during the early years of the Bush Administration and in the cover-up that ensued after the program was ended. Presumably, this means that McCain would vote against Haspel if he is able to be in Washington when her nomination is considered. However, even if McCain’s health prevents him being there, it still makes McConnell’s position difficult because with Paul apparently committed to voting against both nominees,  it means that it would be mathematically impossible for the GOP to confirm either nominee without getting some support from across the aisle.

With respect to the Pompeo nomination, the fact that 14 Democrats ended up supporting his nomination to be C.I.A. Director just last year likely indicates that he would be able to find at least a handful of Democrats to get the nomination the majority vote it needs for confirmation. Additionally, while I largely agree with Senator Paul’s concerns that Pompeo is likely to be much more of a “yes man” for the President when it comes to some of the more controversial aspects of the President’s foreign policy such as his disdain for the nuclear deal with Iran, I largely agree with the idea that a President should be entitled to have the Cabinet Secretaries he wishes and that it isn’t unreasonable for him to expect that said Secretaries will agree with the policy goals that he has in mind. For that reason, I tend to think that the Pompeo nomination will likely go through unless Democrats end up staying united in opposition as a means of sending a message to the President. Given the fact that there are many Democrats who agree with the President on issues such as Iran, including no less than Senate Minority Leader Chuck Schumer, who opposed the nuclear deal with Iran when it was up for consideration in 2015.

The Haspel nomination, though, could prove to be a different story.

As I noted yesterday, Haspel’s role in the agency’s torture program and, even more importantly, her role in attempting to cover that program up by ordering the destruction of video recordings evidencing those acts, is a serious matter that arguably ought to put her fitness to lead the C.I.A. in doubt. Unlike Pompeo, Haspel has not faced Senate scrutiny in the past and she is likely to come under tough questioning regarding her role in the torture program and how she would handle a hypothetical Presidential order to resume the program. This last point is particularly relevant given the fact that President Trump has in the past said that we should go back to using the interrogation techniques that Haspel and others engaged in under C.I.A. auspices during the early years of the “War On Terror.” As I said yesterday, Haspel should at the very least face questioning regarding these matters before she’s elevated to the position of C.I.A. Director.

With Paul already a no on Haspel’s nomination and McCain either an apparent no or possibly not voting at all, the question then becomes what Senate Democrats will do with respect to this nominee. If they stay united in opposition, then it will be impossible to get Haspel through the Senate and Trump will be handed an embarrassing defeat. As things stand, that doesn’t strike me as being a bad thing because, as Greg Sargent puts it in The Washington Post, the Haspel nomination is a test of America’s conscience:

Haspel’s advocates will offer a number of defenses in an attempt to wash away this history. They will say that the torture was legal according to the Bush administration memos, and that she was following orders. Those vulgar arguments are barely worth addressing, if you think it might be worthwhile to have a CIA director with a functioning conscience. They’ll say that if you put aside the torture question, Haspel is an eminently qualified intelligence professional who has spent her career in public service, and it would also be an important milestone to have the agency headed by a woman for the first time. Those things are true, but utterly irrelevant.

Based on her record alone, I’m inclined to say that Haspel should be rejected. Whether that happens, though, remains to be seen.