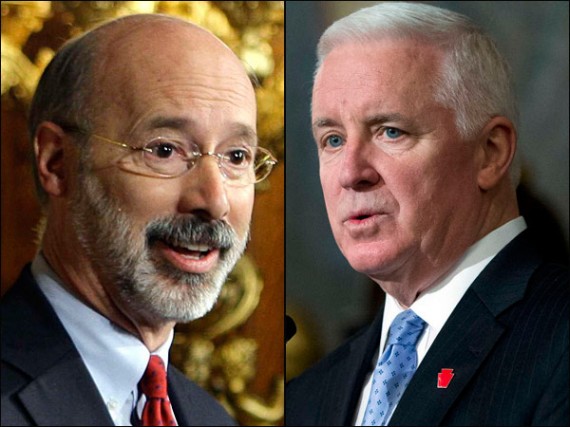 It’s been quite apparent for some time now that Tom Corbett was among the most vulnerable Republican Governors up for re-election in 2014. The combination of a mostly weak state economy, a Voter ID law that backfired on the state in court, and other controversies such as Corbett’s foolish lawsuit against the NCAA over the sanctions imposed on the Penn State football program had kept Corbett’s numbers in the red for quite some time. For awhile there, it even seemed like state Republicans might make an effort to boot him from the top of the ticket in favor of a candidate that might actually have a chance to win. While that never materialized, several Democrats did run for the opportunity to face Corbett in the fall, with the winner being businessman Tom Wolf, and if two new polls are any indication things are going to go very well for Wolf this year.

PPP’s first poll of the general election for Governor in Pennsylvania finds a race that isn’t remotely competitive. Democratic challenger Tom Wolf leads Republican incumbent Tom Corbett 55/30. Wolf’s 25 point lead has more than doubled from the 12 point advantage he had over Corbett on PPP’s last poll of the state in November.

The biggest story in the race continues to be Corbett’s unpopularity. Only 27% of voters approve of the job he’s doing to 58% who disapprove. But Wolf is also proving to be an unusually strong Democratic candidate. He has a +27 net favorability rating, with 47% of voters seeing him favorably to only 20% with a negative opinion. His strong numbers with Democrats (68/10) are unsurprising given his margin of victory in the primary, but even with Republicans he comes close to breaking even at a 29/32 favorability.Wolf is winning over 24% of Republicans while losing just 10% of Democrats to Corbett, and he also has a 43 point lead with independents at 63/20.

One thing voters do agree with Tom Corbett on despite his overall unpopularity is the decision he made not to appeal the court decision legalizing gay marriage in Pennsylvania. 56% of voters say they agree with Corbett’s decision to only 33% who disagree. Those numbers come among growing acceptance for gay marriage in Pennsylvania- for the first time in PPP’s polling a plurality of voters in the state support it with 48% in favor to 44% who remain opposed. That represents a 20 point net shift on attitudes toward gay marriage in the state over the last two and a half years. In November of 2011 we found just 36% of voters supported it with 52% believing it should remain illegal.

Apparently unscathed by a bruising Democratic primary battle, businessman Tom Wolf, the Democratic challenger for Pennsylvania governor, tops Gov. Tom Corbett by a commanding 53 – 33 percent and outscores the Republican incumbent on every measure in the survey, according to a Quinnipiac University poll released today.

This compares to a 52 – 33 percent Wolf lead in a February 26 survey by the independent Quinnipiac (KWIN-uh-pe-ack) University, conducted before the primary bloodletting began in earnest.

Pennsylvania voters disapprove 55 – 35 percent of the job Gov. Corbett is doing – his lowest net score ever – and say 58 – 33 percent that he does not deserve to be reelected. The governor gets a negative 29 – 50 percent favorability rating, compared to Wolf’s 46 – 14 percent favorability, with 38 percent who don’t know enough about him to form an opinion.

“When only 23 percent of the electorate says their families are better off now than they were four years ago, the crisis of confidence reverberates through the State House.”

In an open-ended question allowing for any answer, 30 percent of Pennsylvania voters who disapprove of Gov. Corbett cite education as the main reason, while 8 percent point to fracking and the environment.

Pennsylvania voters say Wolf would do a better job than Corbett on several issues:

While it’s certainly possible, it seems unlikely that Corbett will be able to bounce back from numbers like this. Moreover, if they hold up, it seems likely that the GOP will lose the majorities is gained in the State Legislature four years ago and the Pennsylvania will switch back to being the blue state that it has basically been since at least 1988. At the very least, I would not expect to see many national Republicans campaigning for Corbett or sending money his way. There are far too many races that can actually be won to worry about, and no need to waste money on a candidate that is probably going to lose anyway.