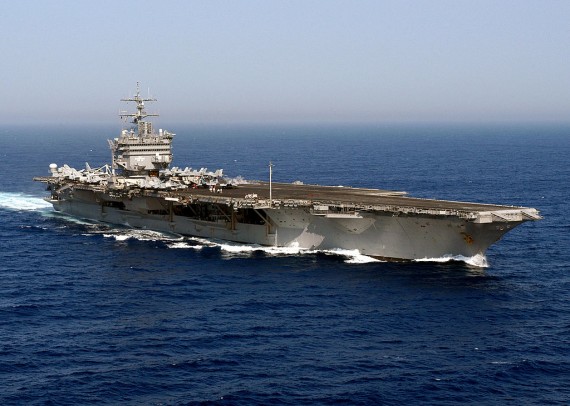 The U.S.S. Enterprise, which served the U.S. Navy in conflicts ranging from the Vietnam War to the War in Afghanistan, was taken out of service yesterday:

NORFOLK, Va. — The world’s first nuclear-powered aircraft carrier was retired from active service on Saturday, temporarily reducing the number of carriers in the U.S. fleet to 10 until 2015.

The USS Enterprise ended its notable 51-year career during a ceremony at its home port at Naval Station Norfolk, where thousands of former crew members, shipbuilders and their families lined a pier to bid farewell to one of the most decorated ships in the Navy.

“It’ll be a special memory. I’ve missed the Enterprise since every day I walked off of it,” said Kirk McDonnell, a former interior communications electrician aboard the ship from 1983 to 1987 who now lives in Highmore, S.D.

The Enterprise was the largest ship in the world at the time it was built, inheriting the nickname “Big E” from a famed World War II aircraft carrier. It didn’t have to carry conventional fuel tanks for propulsion, allowing it to carry twice as much aircraft fuel and ordnance as conventional carriers at the time.

Every other aircraft carrier in the U.S. fleet is now nuclear-powered, though they have two nuclear reactors each compared with the Enterprise’s eight. The Enterprise was the only carrier of its class ever built.

It’s the end of a long and storied career, but it’s not the end of the name Enterprise:

Secretary of the Navy Ray Mabus announced today via video message at the USS Enterprise (CVN 65) inactivation ceremony that the third Gerald R. Ford-class aircraft carrier will be named Enterprise.

Mabus selected this name to honor USS Enterprise (CVN 65), the Navy’s first nuclear-powered aircraft carrier, which was inactivated today in Norfolk, Va. Commissioned in 1961, CVN 65 served for more than five decades. It participated in the blockade of the Cuban Missile Crisis, launched strike operations in Vietnam, and conducted combat missions in support of Operation Enduring Freedom.

“The USS Enterprise was the first of its kind, and for 51 years its name has been synonymous with boldness, readiness and an adventurous spirit,” said Mabus. “Rarely has our fleet been without a ship bearing the name. I chose to maintain this tradition not solely because of the legacy it invokes, but because the remarkable work of the name Enterprise is not done.”

The future USS Enterprise, designated CVN 80, will be the ninth ship to bear the name.

The Gerald R. Ford-class aircraft carrier will be 1,092 feet in length and have a beam of 134 feet. The flight deck will be 256 feet wide, and the ship will be able to operate at speeds in excess of 34 knots. Enterprise will be built by Huntington Ingalls Industries-Newport News Shipbuilding in Newport News, Va.

Under the current schedule the new Enterprise will be delivered in 2025.