Vermont’s Bernie Sanders is on the Senate floor right now in what he says is a filibuster of the tax deal:

A leading Senate liberal waged an act of protest against President Obama’s tax-cut proposal on the Senate floor Friday morning.

Sen. Bernie Sanders (I-Vt.) — a self-described democratic socialist — railed against the plan in a lengthy floor speech that he said “you [can] call … a filibuster.”

“You can call what i am doing today whatever you want, you it [sic] call it a filibuster, you can call it a very long speech … ,” read a message posted on Sanders’s Twitter account after he’d taken to the rostrum at around 10:20 a.m.

Most congressional Democrats have loudly protested against the tax-cut deal Obama struck with Republicans, which includes a two-year extension of all the expiring Bush tax cuts in exchange for a 13-month renewal of unemployment benefits.

Sanders has said he will do “whatever it takes” to block the deal, “including a filibuster.”

So far, Sanders has had the floor for an hour and a half. You can watch CSPAN 2 to see how long it lasts. 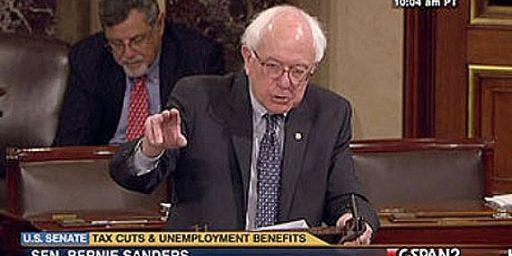