Weak Economic Recoveries Are A Feature, Not A Bug

Business Insider’s Steven Perlberg passing along this chart from a  new paper on American employment by economists Olivier Coibion, Yuriy Gorodnichenko and Dmitri Koustas who analyzed recessions and recoveries going back more than 20 years and found that “weak” recoveries have increasingly become the rule rather than the exception: 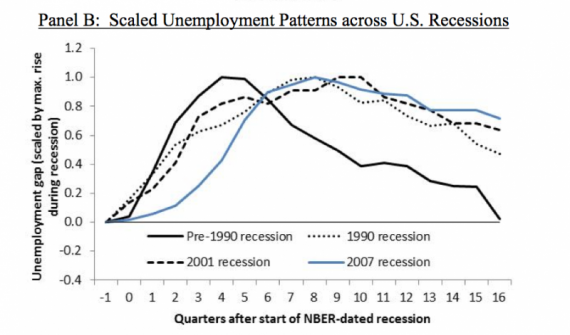 The trend is reminiscent of 1980s Western European recessions dubbed “Eurosclerosis,” leading the authors to ask if the United States is fighting its own bout of “Amerisclerosis.” In lay terms, we might call Amerisclerosis the “jobless recovery.”

FILED UNDER: Economics and Business, Employment

Current Economic Recovery Is The Weakest Since World War II