Who Was The First “Democratically Elected” President Of The United States?

In 1789, George Washington took office after being elected by only a small portion of the population of the U.S. Does that mean he wasn't "democratically elected?" 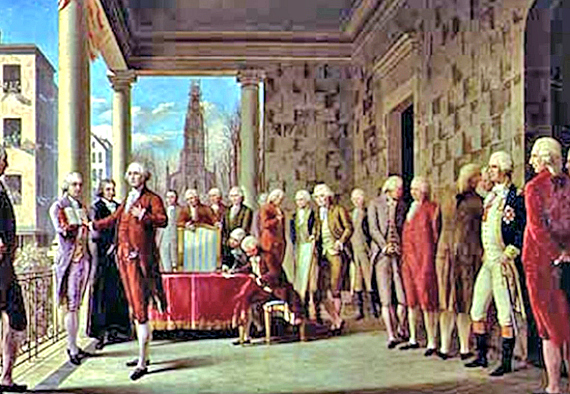 Reflecting on the death of Nelson Mandela, Cory Doctrow raises this intriguing point:

This morning, as I listened to the BBC World Service on Mandela, I found myself pondering what it meant that he was South Africa’s “first democratically elected leader.”

This is undoubtedly true. The apartheid regime held elections regularly, but only white people were given the vote. The systematic, arbitrary denial of the franchise to a large fraction of the population makes those elections “undemocratic” and their leaders illegitimate. I think that this is indisputable.

But what about US elections prior to the 19th Amendment? Was Warren Harding the first “democratically elected leader of the United States?”

Or if there’s something special about gender that disqualifies it from being a prerequisite for democratic legitimacy, let’s have the apples-to-apples comparison: enfranchisement for people of color.

Black people got the right to vote in the USA in 1870, making Ulysses S Grant the first “democratically elected” leader in US history (albeit that black people were systematically disenfranchised by law, norm, and deed throughout the land, a practice that continues today, especially in states with Tea Party legislatures).

One could take the analogy even further, of course. Even though the 15th Amendment extending the franchise to African-Americans was ratified in 1870, the reality of the situation was that for most off the period between that date and the passage and enforcement of the Voting Rights Act of 1965, vast numbers of African-Americans were prevented from voting by various legal and illegal means ranging from poll taxes and literacy tests to outright intimidation and violence. Does this mean that Richard Nixon, the first President elected after passage of the VRA was “the first democratically elected President of the United States” when he was elected in 1968, or, if you factor the expansion of the franchise to those between 18 and 21 years old, did that happen in 1972? It is, I would submit, not an easy question to answer, at least not as easy as it is when compared to the situation in South Africa.

When the United States of America began electing Presidents, the franchise was, for the most part, limited to white male property owners. This mirrored historical practice in England where members of Parliament were, for a very long time, elected by people meeting similar qualifications and only began to gradually expand after the American Colonies had split away from their British parent. It was no surprise, then, that when it came time to set up a form of government here the colonists largely followed the practice they were familiar with from their homeland. While these look like extremely illiberal voting rules in the context of our day, and they most certainly were, they were also more liberal than anything that existed anywhere else in the world at the time. More importantly, the history of the franchise in both the U.S. and Britain is one where the right to vote gradually expanded beyond just white male landowners, eventually to all white males, then, at least theoretically, to African-American males in 1870, and finally to women in 1920 and younger period in 1971. Other reforms that have been made over the years include things like the direct election of Senators via the 17th Amendment and, at the state and local level, the creation of voter’s power to utilize methods such as recall and initiative and referendum to have more direct control over politics at the state and local level.

Does this mean, though, that there was something illegitimate about elections held under voting laws that existed before hand? I would submit that it doesn’t, at least not in the same sense that the totalitarian nature of the apartheid regime in South Africa and the way it turned a black majority into the status of near non-citizens made a mockery of any claim by the leaders of South Africa prior to Nelson Mandela to claim that they had been “democratically elected.”

There is, I’d submit, a significant difference between an imperfectly extended voting franchise, albeit one that is far broader than any that existed elsewhere in the world, and a regime that is engaged in the systematic suppression of a majority of its population not only by denying them the right to vote, but also by denying them the right to own property, the right to engage in political protest or petition their government, the right to own a firearms, the right to run for or hold a political office, the right to live anywhere except in racially segregated ghettos,and a whole plethora of rights of equal protection under the law and due process of law, all based on the color of their skin. In the first case, you are dealing with the early days of what was considered the limits of a democratic republic, limits that gradually expanded as people became better educated, and most important expanded largely via non-violent democratic means (the Civil War being an obvious exception to that part of the equation). In the second, you’re dealing with utter and abject tyranny. When the pre-Mandela leaders of South Africa called themselves “democratically elected,” assuming that they ever actually did, it was as much of a lie as when the leaders of any of the other petty dictatorships on the African continent who are re-elected in fixed elections with 90%+ of the vote on a consistent basis. This isn’t to say that the leaders of our own nation were elected under ideal conditions, but I would suggest that those elections deserve to be viewed in a different moral context than the elections of the seven men who held the title of “State President Of South Africa” before Apartheid finally came to an end.

So, as imperfect as it may have been under present standards of what the right to vote consists of, the answer to Doctorow’s question is really quite easy. George Washington was the first democratically elected President of the United States. The franchise, while limited at the time, still made the nation unique in the world, as did our later ability to expand it on a mostly peaceful basis. Yes, you might argue that it took too long for voting rights to be expanded and that in some sense they remain under threat for some people, but that ought not undercut the legitimacy of the elections that preceded these reforms. Unlike South Africa, the United States was not a virtual dictatorship for most of the people who lived in it from 1789 until 1870 (or 1920, or 1968, or 1972) and it ought not be judged as one.