Why Do Dictators Like Kim Jong Un Bother To Hold Fake Elections?

Why do dictators feel the need to pretend that they have the consent of the people over whom they rule? 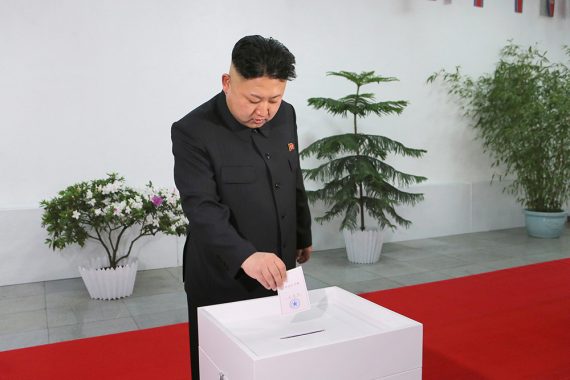 If Sunday’s vote in North Korea is any indication, supreme leader Kim Jong Un is the most popular politician of all time.

North Korea state media reported Monday that Kim was elected to the Supreme People’s Assembly, the highest legislative body in North Korea, in a vote that had 100 percent turnout. What’s more, not a single ballot was cast against him. It was the young leader’s first election since the 2011 death of his father, Kim Jong Il, and the national turnout topped the nation’s traditional 99 percent showing.

The state-run Korean Central News Agency was pretty pumped about the news: “This is an expression of all the service personnel and people’s absolute support and profound trust in supreme leader Kim Jong Un as they single-mindedly remain loyal to him.”

In previous elections of this kind, which are more symbolic than political, 687 deputies are also elected to the Supreme People’s Assembly. Only the results of the election involving Kim, which involved his home district of Mount Paekdu, were announced Monday.

For him, turnout was so high that even the infirm, elderly, and North Koreans living abroad were compelled to vote for him, the North Korean news agency says. Indeed, those reports show North Korea was “seething” with “election atmosphere.” “A Korean in China noted he keenly realized the truth that the socialist system represented the genuine life and destiny of the people and their eternal future,” the news agency says.

Ballots in North Korea only have one candidate to choose from for each district. They can, in theory, chose “no” for a candidate — but according to official accounts, everyone usually votes “yes.”

This is due in no small part, one imagines, to the fact that voting no would essentially be a one-way ticket to a “re-education” camp.

Election results like this are, of course, absurd. North Korea has nothing resembling a functioning democracy and there are no opposition candidates. And yet, for some reason, they choose to hold these mock elections and pretend to the world that they actually mean something. We see similar faux elections in other parts of the world, of course, and we’ve also seen them in the past in nations such as the Soviet Union, which also used to hold its own form of elections in which only one party was actually allowed on the ballot. Nobody in the outside world actually takes these “elections” seriously, and it’s doubtful that the average citizens supposedly given the opportunity to vote do either. And yet, the practice of faux elections in nations where democracy doesn’t really exist is fairly common. Dictators didn’t always deign to stand for election, of course, even if it is an election that they are guaranteed to win. The Absolute Monarchs of Europe never did it. The Czars never did it. It’s only been in the relatively recent past that we’ve seen this type of behavior from nations ruled by dictators, and one has to wonder why they bother to hold elections that no serious person believes are legitimate.

The best explanation that I’ve seen is that, beginning at least in the 20th Century and arguably before then, the idea of consent of the governed has become inextricably tied to national legitimacy to such an extent that even dictators find themselves having to establish at least the illusion that their rule is supported by the people. Because of this, even dictators feel the need to h0ld “elections” in an effort to claim to the rest of the world that they have the same legitimacy as, say, the President of the United States or the Prime Minister of the United Kingdom. Consent of the governed, then, has replaced the Divine Right Of Kings as the determining factor when it comes to legitimacy. While the rest of the world rightly recognizes that these elections are fraudulent, the fact that dictators feel the need to hold elections implies that they recognize the fact that, to the world as a whole, only rulers who are elected by the people are truly legitimate.

The current Ukrainian crisis illustrates this quite well. If they wanted to, the Russians could use military force to grab control of Crimea and evict Ukrainian forces at the drop of a hat. There would likely be some bloodshed, but in the end there’s no real doubt that Russia’s superior military power would win out in the end. Rather than taking that step, though, the Russians, through their allies in Crimea, are going through with a referendum that will likely come out in favor of Crimea becoming part of Russia as it was before 1954. It’s possible that there will be military action after that, but if there is then the Russians will claim that they are simply acting to protect the wishes of the Crimean people.