Echoing my post of yesterday, the Wall Street Journal speculates whether Transnistria might be next on Putin’s agenda:

Transnistria voted in 2006 to ask to join Russia and this month its leaders repeated the request. Russia hasn’t taken up that appeal, but it did hold military exercises in the region last weekend. Another minority enclave in Moldova populated by the Turkic Gagauz people, who are pro-Russian, held its own Crimea-style referendum on Feb. 2 that called for independence if the Moldovans seek EU membership. In both cases, Russia could use force to cleave off these regions from Moldova.

Ukrainians are worried about another scenario. Transnistria’s capital Tiraspol is near Odessa, the Ukrainian port city founded by Catherine the Great, and only about 300 miles from Crimea. The southern Ukrainian regions along the Black Sea are full of Russian speakers. After his Crimean conquest, Mr. Putin now could move on to claim his “corridor”—another historically pregnant phrase—to link Crimea and Transnistria. He has the forces in the peninsula to do it.

It’s a trend! Deutsche-Welle quotes a man living in Tiraspol (capital of Transnistria):

“We Slavs should live under Slavs – and Russia is on the right path politically,” said a man with a gray moustache, browsing a Tiraspol flea market. A blind street musician played the accordion while older people offered their wares, from buttons with Soviet symbols to secondhand shoes and plumbing pipes. Like the moustached flea market visitor, 60 percent of Transnistria’s half-million citizens speak Russian. The man said he has nothing against the Republic of Moldova or its Romanian-speaking people. He studied engineering in Moldova’s capital, and said he is not interested in speaking Romanian, the official language of Moldova, to which Transnistria continues to officially belong.

But when it comes to political problems, in his view, it isn’t Moldova’s government that is at fault, but rather a great conspiracy by the United States. “Yugoslavia used to be a paradise, but the Americans turned it into hell,” he said. “They’ve now done that with Ukraine – and that will also happen in Moldova.”

and ITAR-TASS reminds us talks over Transnistria’s status are remaining on schedule:

Talks on the settlement of the conflict over Moldova’s breakaway region of Transnistria have not been postponed, Russia’s ambassador to the OSCE has said.

“We expect the talks to be held on the date,” Russian permanent representative to the OSCE Andrei Kelin told a video conference on Friday.

The talks within the 5+2 format (Russia, Moldova, Transnistria, Ukraine, the OSCE and observers from the EU and the US) are scheduled for April 10-11. 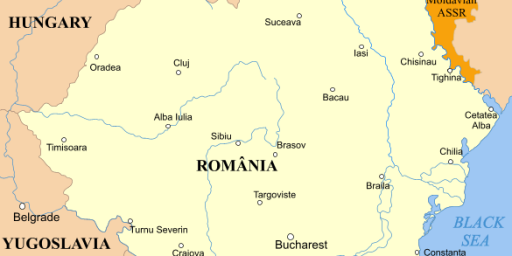