A Two Man Race In Iowa, Or Still Room For A Breakthrough?

Right now, Iowa is all about Mitt Romney, Ron Paul, and a bunch of also-rans. 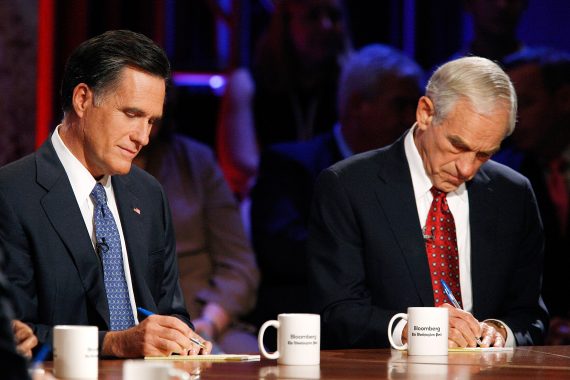 The first post-Christmas poll out of Iowa suggests that the race is becoming even more of a two-man race than it was a week ago:

The last week and a half has brought little change in the standings for the Iowa Republican caucus: Ron Paul continues to lead Mitt Romney by a modest margin, 24-20. Newt Gingrich is in 3rd at 13% follohttps://www.outsidethebeltway.com/wp-admin/post-new.phpwed by Michele Bachmann at 11%, Rick Perry and Rick Santorum at 10%, Jon Huntsman at 4%, and Buddy Roemer at 2%.

Paul’s strength in Iowa continues to depend on a coalition of voters that’s pretty unusual for a Republican in the state.  Romney leads 22-20 with those who are actually Republicans, while Paul has a 39-12 advantage with the 24% who are either independents or Democrats. GOP caucus voters tend to skew old, and Romney has a 34-12 advantage with seniors. But Paul’s candidacy looks like it’s going to attract an unusual number of younger voters to the caucus this year, and with those under 45 he has a 35-11 advantage on Romney. The independent/young voter combo worked for Barack Obama in securing an unexpectedly large victory on the Democratic side in 2008 and it may be Paul’s winning equation in 2012

The question, of course, is whether those younger, less politically involved Paul supporters will get themselves out into a cold Iowa night to support their candidate. It was largely because of doubts like this, for example, that many pundits got caught underestimating Barack Obama’s chances in the 2008 Democratic Caucuses. As it turned out, of course, those voters turned out for Obama. Will they turn out for Paul? Well, if enthusiasm counts for anything, then Paul is sitting pretty:

Paul continues to have much more passionate support than Romney. 77% of his voters are firmly committed to him, compared to 71% for Romney. Among voters who say their minds are completely made up Paul’s lead expands to 7 points at 28-21. If Paul’s lead holds on through next Tuesday it appears he’ll have won this on the ground- 26% of voters think he’s run the strongest campaign in the state to 18% for Bachmann and 10% for Santorum with just 5% bestowing that designation to Romney. There’s also an increasing sense that Paul will indeed win the state- 29% think he’ll emerge victorious with 15% picking Romney and no one else in double digits.

Notwithstanding Paul’s good numbers here, though, there’s a rising sense that Mitt Romney, who had largely been ignoring Iowa for much of the campaign season (skipping the Ames Straw Poll, for example), is within striking distance of a win there. If that happens, and if, as expected, Romney pulls off the kind of convincing win in New Hampshire that the current polls are predicting, then this is going to be a very different race in two weeks. In fact, if Romney manages to pull off back-to-back victories in Iowa and New Hampshire, he would have done something that no Republican has done since 1976 when Gerald Ford defeated Ronald Reagan in the Iowa Caucuses and then went on to narrowly beat him again in the Granite State. No Republican since then has been able to pull off Ford’s feat. While Romney is currently trailing Gingrich in South Carolina and Florida, back-to-back wins in early January would be a significant boost to his campaign in both states, and would make it harder for a candidate like Gingrich, already behind when it comes to money and organization, to seriously compete as this race goes further down the road.

To put it in simple terms, if Mitt Romney wins Iowa and New Hampshire then this race is over.

Even if Iowa ends with a Paul victory and Romney a close second, though, Romney would still seem to be sitting pretty. As I’ve discussed before, the significance a Paul victory in Iowa is going to be heavily discounted by the punditocracy and the GOP selectorate in other states. Additionally, as I said yesterday, Ron Paul simply doesn’t have the staying power to seriously contend for the nomination beyond Iowa and New Hampshire. If anything, the specter of a Paul victory is likely to send Republicans rushing into the arms of Mitt Romney, regardless of their doubts about him.

Looking beyond the top two, though, Nate Silver sees something else that could happen:

The most interesting thing about the latest polls in Iowa (which are the basis for our forecasts) is that they essentially show a four-way tie for third place among the Republican presidential contenders, with Newt Gingrich, Michele Bachmann, Rick Santorum and Rick Perry all projected to receive between 11 and 14 percent of the vote.

This is especially interesting because these candidates, with the partial exception of Mr. Gingrich, have very similar platforms to one another. They are hoping for support from many of the same demographic groups, especially evangelical voters, and have struck many of the same themes in their attempts to appeal to caucus-goers.

If these candidates could somehow combine forces, they could very easily win the caucuses. Even if you exclude Mr. Gingrich from the group, Mr. Santorum, Mrs. Bachmann and Mr. Perry collectively have about 34 percent of the vote, well above the projected figure for either Ron Paul or Mitt Romney, the candidates leading the polls.

There are extremely strong incentives for supporters of Mrs. Bachmann, Mr. Santorum and Mr. Perry to behave tactically, throwing their weight behind whichever one appears to have the best chance of finishing in the top two. What that means is that if any of these candidates appear to have any momentum at all during the final week of the campaign, their support could grow quite quickly as other voters jump on the bandwagon.

This is also a case in which the polling may actually influence voter behavior. In particular, if one of these candidates does well in the highly influential Des Moines Register poll that should be published on New Year’s Eve or thereabouts, that candidate might be a pretty good bet to over-perform polling as voters use that as a cue on caucus night to determine which one is most viable.

I’d also pay a lot of attention to the press coverage for each candidate. Right now, for instance, there seem to be a fair number of stories about Mr. Santorum, which suggests that it is his turn to “surge” in the polls.

To be fair, there have been pundits speculating about the “Santorum Surge” for months now and, despite the fact that the former Pennsylvania Senator and his family have all but taken up permanent residence in the Hawkeye State, it has never come about. Partly, its because Santorum just doesn’t come across as an engaging campaigner, either during one-on-one interviews or one the stump. Mostly, though, it seems as though the voters in Iowa sense the fact that Santorum really has no campaign organization outside their home state. The latest example of that being the fact that Santorum didn’t even both to submit paperwork to qualify for Virginia’s March 6th primary ballot.

In fact, all three of the conservatives that Silver mentions — Bachmann, Perry, and Santorum — suffer from the same problem. None of them seem to have a credible campaign organization outside of the Hawkeye State at this point. This is perhaps most surprising about Perry considering he came into this race as the most experienced campaigner and managed to raise a ton of money in a very short period of time. Would Iowa voters really rally behind candidates that have no real chance of winning? Sure, they have a history of not picking the person who becomes the nominee in the end, but even then  didn’t always stray far from the mark. George H.W. Bush was a serious contender in 1980. Bob Dole was  serious contender in 1988. And, yes, Mike Huckabee was a serious contender in 2008 in that he at least had a viable campaign outside Iowa. None of these three seem likely to last beyond January, so one wonders why the voters would rally behind them.Unless we see some evidence between now and Sunday that one of these three is breaking out of their three-way tie for 4th place, I doubt any one of them will be able to credibly claim a “moral victory” in Iowa.

As things stand now, though, Iowa is a two man race between Ron Paul and Mitt Romney. And that’s very good news for Mitt Romney.