Killing's our business and business is good.

CFR’s Micah Zenko has a provocative piece at The Atlantic titled “Who Can’t America Kill?” It doesn’t quite go where I was expecting it to.

The stark reality of the post-9/11 era is that the threshold for who and where the U.S. military and intelligence community can kill has been increasingly lowered, with no end in sight.

In the wake of the African Embassy Bombings in 1998, President Clinton issued three top secret “Memoranda of Understanding,” which authorized the CIA to kill Bin Laden and his key lieutenants–fewer than ten people overall–only if they resisted arrest. The CIA interpreted the memoranda as insufficient by limiting the use of lethal force. As George Tenet noted in his memoir, “Almost every authority granted to CIA prior to 9/11 made it clear that just going out and assassinating [Bin Laden] would not have been permissible or acceptable.”

After 9/11, President George W. Bush made the policy of targeted killing more explicit. Just six days after the attacks, Bush signed a Memorandum of Notification that authorized the CIA to kill, without further presidential approval, some two dozen al-Qaeda leaders who appeared on an inital “high-value target list.”

None of this bothers me much. While I’m sympathetic to former MI5 head Eliza Manningham-Buller‘s argument that we’ve made a mistake declaring “war” on terrorism after the 9/11 attacks rather than treating it primarily as a law enforcement and intelligence matter, I’m not opposed to hunting down and killing al Qaeda leaders, either.

There are operational issues with a state declaring war on a non-state actor, much less a tactic. But al Qaeda was at war with the United States–attacking our military targets, embassies, and even our cities–before we seriously began fighting back. While killing bad guys isn’t going to achieve victory on its own, it’s a start.

Giving “shoot to kill” orders against presumptive al Qaeda leaders is frankly less morally objectionable that doing so against ordinary soldiers of countries we’re at war with. Certainly, these guys had more of a choice than your average Wehrmacht or Viet Cong private.

Included on this list was Abu Ali al-Harithi, an operational planner in the al-Qaeda cell that attacked the U.S.S. Cole. On November 3, 2002, a Predator drone killed al-Hariti, four Yemenis, and Ahmed Hijazi, a naturalized U.S. citizen and the ringleader of an alleged terrorist sleeper cell in Lackawanna, New York. This was the first targeted killing outside of Iraq and Afghanistan, and the first such killing of a naturalized U.S. citizen.

In early 2010, President Obama authorized the killing of a U.S. citizen, Anwar al-Awlaki, a Yemeni cleric born in New Mexico. U.S. intelligence officials claimed that al-Awlaki played an operational role in al-Qaeda in the Arabian Peninsula, which has plotted to attack the American homeland. A former senior legal official in the Bush administration was unaware of Americans being approved for killing under the former president.

I addressed this issue back in January 2010 (“Obama Orders Americans Killed“):

Drawing the line is difficult, indeed.  Most obviously, if said accused terrorist were located within the borders of the United States, it would be clearly illegal to simply assassinate him. (Provoking him into defending himself by kicking in his door late at night, thus necessitating killing him, would of course be permissible.) But that would be true, I should think, of Osama bin Laden himself, much less an American citizen.

On the other hand, we blow up suspected terrorists — or, even Taliban leaders — in commando raids and drone attacks in places like Pakistan without thinking about it.  Indeed, according to an official quoted in Priest’s report, “There have been more such strikes in the first year of Obama’s administration than in the last three years under President George W. Bush.”  No one seems to be complaining about the president’s authority to do this.  (Many question whether it’s a sound strategy, of course, but that’s a different issue entirely.)

Would it make any difference if the accused terrorist had American citizenship?   I’m not so sure.

Obviously, this is an awesome power and one that could easily be abused.  But it’s not at all clear where the line should be drawn.

I’m frankly much more concerned about designating American citizens living in the United States as “enemy combatants” on mere say-so and locking them up without due process. Killing those living among our enemy and actively working with them in planning ops against American citizens strikes me as better than the alternative.

Zenko points to this passage in a recent WaPo report on JSOC:

“The president has given JSOC [Joint Special Operations Command] the rare authority to select individuals for its kill list–and then to kill, rather than capture, them. Critics charge that this individual man-hunting mission amounts to assassination, a practice prohibited by U.S. law. JSOC’s list is not usually coordinated with the CIA, which maintains a similar but shorter roster of names.”

First off, assassination actually isn’t prohibited by US law. Beginning with President Ford, political assassination was banned by executive order. The practice continued under Presidents Carter, Reagan, and GHW Bush. But President Clinton actually modified the rule in 1998 specifically to allow for the targetted assassination of designated terrorists.

Now, Zenko ultimately raises a good question: Where do we draw the line? Given a war with no end in sight and an enemy that doesn’t wear distinctive uniforms or play by the rules of war, do we really want to go around killing everybody who might be a terrorist or member of the Taliban?

I don’t have good answers. But that’s the nature of the war we’ve been dragged into.

In the case of the Taliban, my longstanding counsel is to get out of AfPak. In the case of al Qaeda, though, there’s no end in sight to the list of people who need killing. 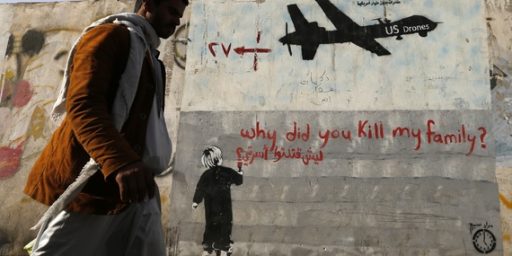 How Risky Was the Osama bin Laden Raid?