American special operators and intel types are teaming up with Yemeni forces to kill bad guys there, Dana Priest reports.  But Glenn Greenwald is most interested in the third paragraph:

As part of the operations, Obama approved a Dec. 24 strike against a compound where a U.S. citizen, Anwar al-Aulaqi, was thought to be meeting with other regional al-Qaeda leaders. Although he was not the focus of the strike and was not killed, he has since been added to a shortlist of U.S. citizens specifically targeted for killing or capture by the JSOC, military officials said.

Priest gives some more background toward the end of the long piece:

After the Sept. 11 attacks, Bush gave the CIA, and later the military, authority to kill U.S. citizens abroad if strong evidence existed that an American was involved in organizing or carrying out terrorist actions against the United States or U.S. interests, military and intelligence officials said. The evidence has to meet a certain, defined threshold. The person, for instance, has to pose “a continuing and imminent threat to U.S. persons and interests,” said one former intelligence official.

The Obama administration has adopted the same stance. If a U.S. citizen joins al-Qaeda, “it doesn’t really change anything from the standpoint of whether we can target them,” a senior administration official said. “They are then part of the enemy.”

Both the CIA and the JSOC maintain lists of individuals, called “High Value Targets” and “High Value Individuals,” whom they seek to kill or capture. The JSOC list includes three Americans, including Aulaqi, whose name was added late last year. As of several months ago, the CIA list included three U.S. citizens, and an intelligence official said that Aulaqi’s name has now been added.

Greenwald is outraged by this:

Just think about this for a minute.  Barack Obama, like George Bush before him, has claimed the authority to order American citizens murdered based solely on the unverified, uncharged, unchecked claim that they are associated with Terrorism and pose “a continuing and imminent threat to U.S. persons and interests.”  They’re entitled to no charges, no trial, no ability to contest the accusations.  Amazingly, the Bush administration’s policy of merely imprisoning foreign nationals (along with a couple of American citizens) without charges — based solely on the President’s claim that they were Terrorists — produced intense controversy for years.  That, one will recall, was a grave assault on the Constitution.  Shouldn’t Obama’s policy of ordering American citizens assassinated without any due process or checks of any kind — not imprisoned, but killed — produce at least as much controversy?

He anticipates the obvious retort:

Obviously, if U.S. forces are fighting on an actual battlefield, then they (like everyone else) have the right to kill combatants actively fighting against them, including American citizens.  That’s just the essence of war.  That’s why it’s permissible to kill a combatant engaged on a real battlefield in a war zone but not, say, torture them once they’re captured and helplessly detained.

Fair enough. But, he continues:

But combat is not what we’re talking about here.  The people on this “hit list” are likely to be killed while at home, sleeping in their bed, driving in a car with friends or family, or engaged in a whole array of other activities.  More critically still, the Obama administration — like the Bush administration before it — defines the “battlefield” as the entire world.  So the President claims the power to order U.S. citizens killed anywhere in the world, while engaged even in the most benign activities carried out far away from any actual battlefield, based solely on his say-so and with no judicial oversight or other checks.  That’s quite a power for an American President to claim for himself.

Drawing the line is difficult, indeed.  Most obviously, if said accused terrorist were located within the borders of the United States, it would be clearly illegal to simply assassinate him. (Provoking him into defending himself by kicking in his door late at night, thus necessitating killing him, would of course be permissible.) But that would be true, I should think, of Osama bin Laden himself, much less an American citizen.

On the other hand, we blow up suspected terrorists — or, even Taliban leaders — in commando raids and drone attacks in places like Pakistan without thinking about it.  Indeed, according to an official quoted in Priest’s report, “There have been more such strikes in the first year of Obama’s administration than in the last three years under President George W. Bush.”  No one seems to be complaining about the president’s authority to do this.  (Many question whether it’s a sound strategy, of course, but that’s a different issue entirely.)

Would it make any difference if the accused terrorist had American citizenship?   I’m not so sure.

Obviously, this is an awesome power and one that could easily be abused.  But it’s not at all clear where the line should be drawn. 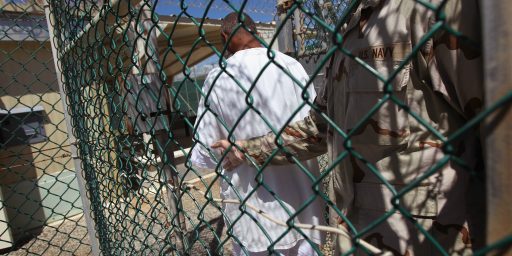