Our long national nightmare is nearly over. 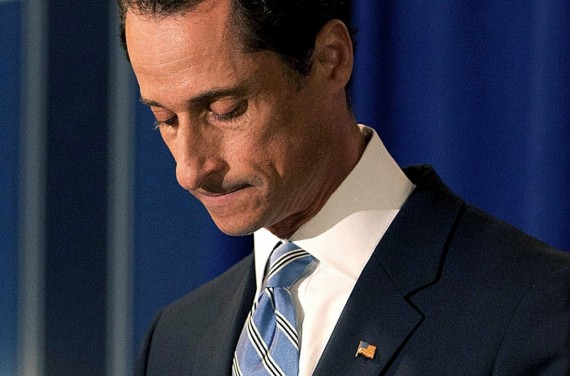 After three weeks, it looks like the Anthony Weiner story is coming to an end:

WASHINGTON — Representative Anthony D. Weiner has told friends that he plans to resign his seat after coming under growing pressure from his Democratic colleagues to leave the House, said a person told of Mr. Weiner’s plans.

His decision follows of revelations of his lewd online exchanges with women, said a person told of Mr. Weiner’s plans.

The news comes as Democratic leaders prepared to hold a meeting on Thursday to discuss whether to strip the 46-year-old Congressman of his committee assignments, a blow which would severely damage his effectiveness.

Mr. Weiner, a Democrat, came to the conclusion that he could no longer serve after having long discussions with his wife, Huma Abedin, when she returned home on Tuesday after traveling abroad with her boss, Secretary of State Hillary Rodham Clinton.

CNN is confirming the report:

Rep. Anthony Weiner plans to resign from Congress in the wake of a “sexting” scandal with several women and lies he repeatedly told about it, a Democratic source with knowledge of Weiner’s plans said Thursday.

And here’s more from MSNBC:

Ten days after admitting that he lied about sending sexually-charged text messages and photos to women he met online, Rep. Anthony Weiner, D-N.Y., is preparing to step down.

The New York Times was the first to report that Weiner told friends of his plan to resign under mounting pressure from House Democratic leaders, who were poised Thursday to strip the New York congressman of his committee assignments.

NBC reported shortly before the news broke that congressional staff members appeared to be packing up Weiner’s office this morning. Per NBC’s Alex Moe, two staff members and two interns left the office with their belongings after turning off lights and locking the door.

And the National Journal:

Rep. Anthony Weiner, the embattled New York Democrat whose online “sextual” escapades spawned an odd and a drawn out Washington political scandal, plans to resign his House seat after nearly two weeks of painfully trying to resist the mounting calls for him to step aside that drew in even President Obama, National Journal has confirmed.

Weiner, who represented part of Brooklyn and Queens in New York City, was a hero to many liberals and a ubiquitous presence on cable TV, loudly and defiantly defending the values and positions of the political left.  For the last two weeks, however he has been dealing with a crisis born out of revelations about his tragic-comic obsession with sexting that drove him to send lewd pictures of himself and engage in sexual banter with women on social networking sites like Twitter and Facebook.

Weiner finally stepped down after a tortured series of events that had him insisting he either didn’t do things that he did or wouldn’t do something he just did – and eventually requesting and obtaining a two-week leave of absence from the House on Monday to get professional help.

He had steadfastly said that he would not resign.

But his problems grew more complicated in recent days when he admitted through a non-government spokesman Friday that he had engaged in internet conversations with a 17-year-old Delaware girl. That statement came after local police had interviewed the girl about her contact with Weiner.

Weiner – suddenly responding to the news only through a public relations consultant and no longer through his congressional staff – insisted that the internet conversations were not sexual or inappropriate. But merely the fact he had had such contact with a teen seemed to bring his troubles to a critical mass, and prompted House Minority Leader Nancy Pelosi, D-Calif, and other top Democrats to join the calls for him to resign.

Instead, Weiner announced through his publicist Saturday that he would be seeking a leave of absence from Congress to get professional treatment, to help him get well, and make the best decision for himself, his family, and his constituents.

But even then came the surfacing of more lewd photos of the Congressman reportedly sent to a woman, prompting added unease among his colleagues over whether his troubles were significantly staining Democrats politically, and overshadowing their legislative work, such as efforts to combat Republican Medicare proposals.

After the slow drip-drip-drip of disclosure and the refusal of this story to die, this was really rather inevitable.

Weiner will hold a press conference in New York this afternoon after which, hopefully, this story will finally be out of the media