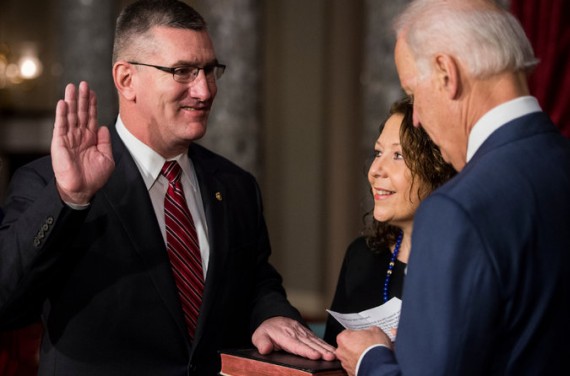 Montana Senator John Walsh, who dropped out of the race for the seat he was appointed to after Max Baucus resigned due to the discovery that he had plagiarized a paper while at the Army War College, has had his degree revoked:

The Army War College rescinded the master’s degree of Senator John E. Walsh on Friday, determining that the Montana Democrat plagiarized his final paper there in 2007.

Mr. Walsh, a retired colonel in the National Guard, withdrew from this year’s election in August weeks after The New York Times reported that he had copied large portions of the paper he submitted as a requirement to graduate from the War College.

The determination was made by an Academic Review Board comprised of faculty members at the college, in Carlisle, Pa. “The college followed the same proceedings as with every student or graduate,” Ms. Kerr said.

She said that, as with others who have their degrees revoked, Mr. Walsh’s name will be scrubbed from the bronze plaque listing the school’s graduates that is a focal point of the campus.

In a statement, Mr. Walsh indicated that he would not resign before his term expires this year. But for the first time, he acknowledged and apologized for his academic fraud.

“Though I disagree with the findings made by the War College, I accept its decision with great humility and respect for the U.S. military,” Mr. Walsh said. “I apologize to all Montanans for the plagiarism in my 2007 paper, and I am prepared to live with its consequences.”

Initially, of course, Walsh tried to blame the incident on post-traumatic stress disorder as a result of his service in Iraq, an explanation that was utterly absurd. He backed away from that argument in later statements, but never really provided any coherent explanation for what happened. His statement today does nothing to clear that up. In the end, this seems like the appropriate sanction given what Walsh did.