Bregrets, They’ve Had A Few: Brits Beginning To Regret Brexit?

At least some portion of the British public appears to be having some second thoughts about Brexit.

A new poll from YouGov seems to indicate that Britons are beginning to regret the decision that was made to leave the European Union in the referendum that took place last year:

After 16 months of tracking Bregret (or rather, thus far, the relative lack of it), a record high of 47% said they thought Britain was wrong to vote leave the EU, coupled with a record low of 42% saying we were right to do so.

Each individual poll has a margin of error so it is important not to take one set of results out of context. In our most recent poll the numbers have reverted back slightly, with just a 3% gap between right and wrong to leave. However, when you look at the last few months together the trend does seem to be towards slightly more people thinking Britain was wrong to vote to leave the EU.

As the chart below shows, there’s always been a sizable number of British voters who have expressed second thoughts about the decision to leave the European Union, but it’s only been recently that this number has become a plurality: 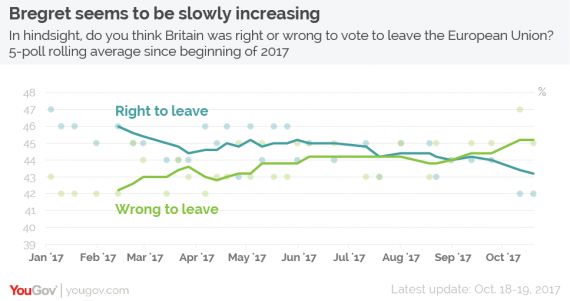 This doesn’t necessarily mean that voters in the United Kingdom are turning completely against Brexit, though. The same poll also finds that a majority of respondents continue to believe that the government should continue to go ahead with the plan to leave the E.U., at least in some form: 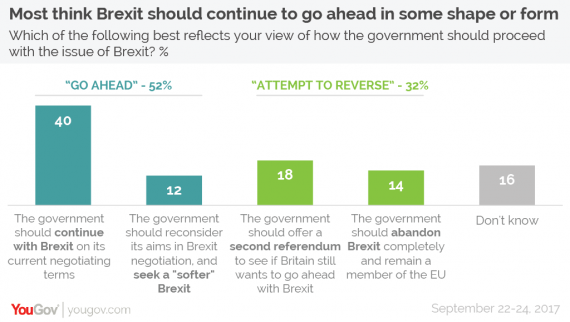 The answer is a bit different when it comes to those people who say they voted ‘Remain’ in the referendum: 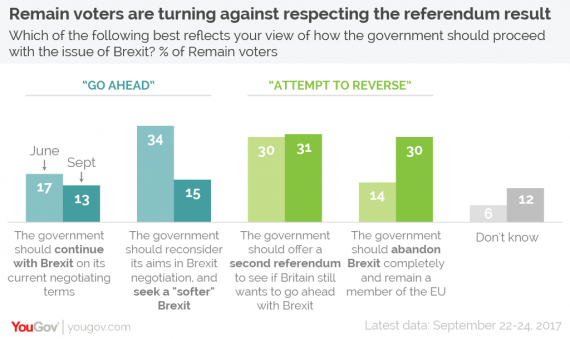 What all this means is hard to say, but for the moment at least it is unlikely to impact either the ongoing Brexit negotiations or the inevitability of the United Kingdom’s exit from the European Union. Both the British government and the European Union have made clear that once the United Kingdom pulled the trigger on formally withdrawing from the European Union that there would be no walking away from the process and that it really wouldn’t be possible for Britain to take back its decision to leave the Union. That process began on March 29th when Prime Minister Thersa May invoked the provisions of Article 50 of the European Union treaty. At that point, the two-year clock started ticking and, at least for now, the formalization of the exit will be completed no later than March 29th, 2019. It’s still unclear what the terms of that exit will look like, and reports over the past six months have indicated that negotiations between London and Brussels are proving to be as complicated as they were anticipated to be. Additionally, there really isn’t any mechanism in British law for the decision to be reversed even it if were possible under the treaty. The law that authorized the government to go ahead with the referendum doesn’t contemplate any kind of a second vote that would attempt to reaffirm or overturn the results of the vote, and as noted above the British public seems to accept the reality that Brexit will happen regardless of what the terms of the final agreement or what the consequences for the United Kingdom might end up being.

At the same time, though, these polls do seem to reflect the fact that the reality of Brexit is starting to hit home with British voters and that, at least to some extent, the thought is starting to take hold that perhaps the decision to leave may have been just a bit hasty, or that there should have been some further consideration of the matter beyond the referendum that took place in June of last year and resulted in a relatively slim majority choosing to leave the E.U. in a vote that brought roughly 72% of the U.K.’s registered voters to the polls. In the end, the margin in favor of leaving was just under 1.3 million votes, which was just about 2.7% of the total amount of people who voted and 1.9% of the total population of the United Kingdom. As I noted in the wake of the vote last year, that leads to the question of why the vote authorizing the referendum didn’t require some form of supermajoritysupermajority in favor of leaving given the consequences that the decision would quite obviously have for the U.K. in the future. Those issues are in the past, of course, but these poll numbers do seem to indicate that at least some portion of the British public is begining to think that the decision to leave the E.U. deserved more consideration than it actually received.