Congress passed a funding bill to avert a shutdown with time to spare early this morning, but now the President is threatening a veto. 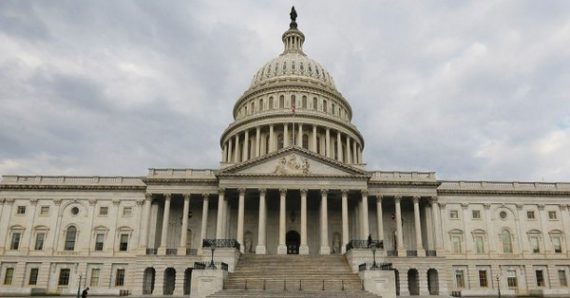 As expected, the House and Senate approved a bill to fund the government through the end of the Fiscal Year with hours to spare before another government shutdown, but it didn’t happen without some cajoling on the part of Senate Majority Leader Mitch McConnell to bring along two Republican Senators who were holding up consideration of the bill:

First there were Rand Paul’s objections. Then Jim Risch’s. But finally at 12:39 a.m. on Friday, the Senate passed a bill funding the government through September and went home after a chaotic 12 hours of drama.

The chamber voted 65-32 to pass the $1.3 trillion spending package and send it to President Donald Trump. But it was a tricky road to avoid a government shutdown, requiring Senate Majority Leader Mitch McConnell (R-Ky.) to privately telephone Paul and let him vent about the Senate rules, then satisfy Risch’s objections to a wilderness area being named after a dead Idaho governor.

“This is ridiculous. This is juvenile,” fumed Sen. Bob Corker (R-Tenn.), who asked McConnell for an explanation of why the chamber was in at midnight. “What has occurred over the last 11 hours that keeps us here voting on a bill that we all know is going to pass?”

McConnell didn’t go into detail but acknowledged the difficult path he took to getting the spending bill across the finish line.

“My principal responsibility is begging, pleading and cajoling. I have been in continuous discussions, shall I say, with several of our members who were legitimately unhappy,” McConnell said.

Paul kept everyone in suspense that he might shut the government down again — but he backed off late Thursday night after a private conversation with McConnell. The junior GOP senator from Kentucky spent the day refusing to rule out forcing another brief government shutdown in opposition to a return to “Obama spending and trillion-dollar deficits.”

But after a call with McConnell around 10 p.m., Paul said he would let the bill go through, a show of pragmatism that was not on display last month when Paul caused an hours-long lapse in government funding.

“It’s never really been about how long we stay here. But it is to a certain extent, when you lose, trying to draw attention to your cause,” Paul told reporters as the clock neared midnight. “We look for victories any way we can, knowing that we don’t have the votes to win.”

Paul’s objections to the bill at least have the advantage of being based on principles, and he is correct to a large degree in his objections to a budget process that essentially allows these 2,200 page monstrosities to be negotiated and drafted in private, with Senators and Members of Congress given essentially no time to even attempt to find out what’s in the bill while the process bars them from even presenting amendments for consideration. This, of course, is not how the budget process is supposed to work, but it has sadly become standard operating procedure in Washington over the past decade or more. Ideally, of course, the budget should be passed based on “regular order,” which would mean individual spending bills passed for each segment of government rather than one huge bill passed at the last possible minute. Unfortunately, this is the world we live in and its unlikely to change anytime soon,

If Paul’s objections were principled, those of Idaho Senator Jim Risch were just utterly petty and ridiculous. Rather than being based on some principled objection to the process, or even to any of the individual pieces of the overall spending package, Risch was objecting to the bill because of a decades-old political feud:

For several hours Thursday night, a senator’s disdain for a deceased political rival threatened to spark a government shutdown.

The request generated all sorts complications as Senate leaders sought to clear the 2,232-page $1.3 trillion spending bill ahead of a Friday-night government shutdown deadline. Among them: Changing the bill would require a House vote as well — many hours after the House passed the bill and members left Washington for a two-week recess.

Aides to Risch did not respond to a message seeking comment on his objections. Risch would not comment outside the Senate chamber early Friday morning: “What part of ‘No’ don’t you understand?” he said. “Do I have a problem with my English? I don’t have any comment.”

The renaming provision passed the House in February in a bill sponsored by Rep. Mike Simpson (R-Idaho), who is chairman of the Appropriations subcommittee on energy and water and thus in prime position to insert pet provisions into the must-pass omnibus bill. As governor, Andrus fought to prevent the opening of an open-pit molybdenum mine in the White Cloud Mountains and served as interior secretary under President Jimmy Carter.

It is unclear why Risch was not informed or did not know about the renaming until Thursday, when it was effectively too late to change the bill. Aides to Simpson did not return a request for comment. Typically provisions included in appropriations bills are heavily vetted by both parties as they move through Congress. But this bill’s progress was especially rapid: It was filed at 8 p.m. Thursday and passed by the House 17 hours later.

The complete dimensions of the animus between Risch and Andrus could not be fully ascertained early Friday morning. But a 2008 story in the Spokane Spokesman-Review recounted that the two men clashed over education funding in the 1980s.

“Risch is one of the most partisan people I’ve ever had to deal with,” Andrus is quoted as saying. “During his time in legislative leadership, cooperation across the aisle and with the governor’s office reached a new low.”

Simpson held a fonder view of the late governor: “Governor Andrus meant so much, to so many in Idaho,” he said in a Feb. 14 statement marking House passage of the renaming. “It is only fitting that this iconic land in Idaho is forever tied to the man who dedicated his public service to protecting it.”

As Risch pressed for the removal of the renaming, Senate GOP leaders increased pressure to drop his objection. Senate Majority Leader Mitch McConnell (R-Ky.) called up a bill to undo the provision, even though House passage would also be necessary to make the change. Then McConnell called all senators to the chamber’s floor in an apparent attempt to clear the roadblock. As Risch sat in his desk, multiple senators surrounded him trying to find a way around the objection.

Risch later followed McConnell, Senate Majority Whip John Cornyn (R-Tex.) and Sen. Tim Scott (R-S.C.) into Cornyn’s office for a 25-minute meeting. Shortly before midnight, Risch left and walked onto the Senate floor without saying a word to reporters. Cornyn later said that no change would be made to remove the renaming language.

After all of that, it looked as though it was smooth sailing and a government shutdown would be averted. Then President Trump took to Twitter threatening a veto:

President Trump suggested on Friday that he could veto a massive $1.3 trillion omnibus spending bill, raising the prospect of a government shutdown.

In a tweet, Trump cited the bill’s lack of funding for his long-promised wall along the U.S.-Mexico border and the fact that it does not extend protections for beneficiaries of the Deferred Action for Childhood Arrivals (DACA) program.

“I am considering a VETO of the Omnibus Spending Bill based on the fact that the 800,000 plus DACA recipients have been totally abandoned by the Democrats (not even mentioned in Bill) and the BORDER WALL, which is desperately needed for our National Defense, is not fully funded,” Trump tweeted.

I am considering a VETO of the Omnibus Spending Bill based on the fact that the 800,000 plus DACA recipients have been totally abandoned by the Democrats (not even mentioned in Bill) and the BORDER WALL, which is desperately needed for our National Defense, is not fully funded.

This is apparently the first sign that the President had any objections at all to the bill, and it certainly doesn’t seem like something that either Republicans or Democrats were anticipating. As things stand, it’s quite simply impossible for Congress to come up with a DACA fix before the close of business today, which is when the current Continuing Resolution would run out. As for the border wall, the funding provided is far from what Trump wants but it was more than Democrats were initially willing to accept so, in that sense, it was a win for Republicans. Complicating all of this is the fact that Congress is scheduled to leave town today for a two week Easter holiday break. If Trump really does follow through on his veto threat, then all of that could go out the window as leadership on both sides of the Capitol struggles to come up with something that the President will accept that can still pass both chambers of Congress.

This is life under the Chaos Presidency, my friends.

Update: After a long, rambling, incoherent statement this afternoon, Trump has signed the spending bill after all:

A few hours after stunning even his closest advisers by tweeting that he was “considering a VETO” of the bill, he held a news conference to say he would begrudgingly support it “as a matter of national security.”

Trump said he swallowed his objections because of its funding boost for national defense and the military. Defense Secretary Jim Mattis and Chief of Staff John Kelly were key in convincing Trump not to veto the legislation, according to a source familiar with conversations between congressional leaders and the president.

“I will never sign another bill like this again,” he said, calling the 2,200 page plan passed by Congress soon after it was unveiled a “ridiculous situation,” adding, “I’m not going to do it again.”

Trump’s earlier veto threat — citing the spending bill’s lack of full funding for his border wall and attention to undocumented immigrants known as Dreamers — came as many lawmakers who would have to override his rejection or pass a stopgap funding measure were already on their way out of Washington for a two-week recess.

Government funding lapsed at midnight Friday, which would have marked the third shutdown of the year.

The president’s top aides said Thursday he would sign the bill, but his threat was a reminder that only Trump truly knows what the White House is doing at any time.

Trump’s tweet caught many in the West Wing and on Capitol Hill by surprise, sending them scrambling to determine how serious he was about vetoing the bill. Illustrating the degree to which Trump had upended his own staff once again, one West Wing official said on Friday morning that the likelihood of a shutdown was “extremely high.”

Before Trump’s afternoon announcement, there was hope in the White House that the defense community, including Mattis — who was slated to meet with Trump on Friday — could convince him that whatever stopgap spending agreement resulted from a shutdown threat would not deliver the high level of defense spending provided by the bill he threatened to nix. Sources said White House legislative affairs liaison Marc Short went to speak to the president to try to convince him of the merits of the deal.

“This is just crazy,” one White House official said.

Crazy? Yes, but it’s what passes for normal in Donald Trump’s America.