To the surprise of no one, the alliance between Ted Cruz and John Kasich is already falling apart. 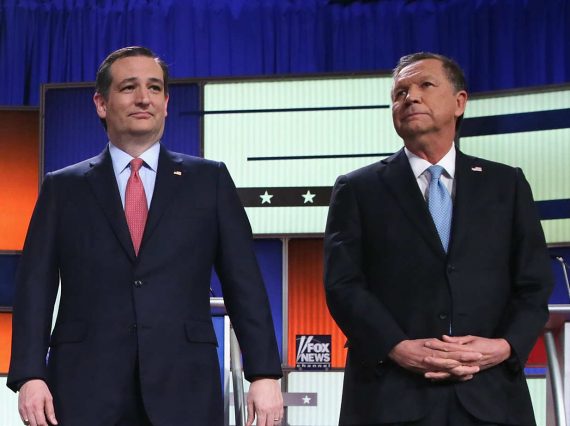 Barely a day before it was announced, the supposed pact between Ted Cruz and John Kasich to stop Donald Trump was already showing signs it was falling apart:

The temporary alliance between Senator Ted Cruz and Gov. John Kasich of Ohio, formed to deny Donald J. Trump the Republican presidential nomination, was already fraying almost to the point of irrelevance on Monday, only hours after it was announced to great fanfare.

With the pact, the two candidates agreed to cede forthcoming primary contests to each other. Mr. Kasich would, most crucially, stand down in Indiana’s primary on May 3 to give Mr. Cruz a better chance to defeat Mr. Trump there, while Mr. Cruz would leave Oregon and New Mexico to Mr. Kasich. It appeared to be a measure of last resort, but initially it seemed like a breakthrough.

Mr. Cruz trumpeted what he called the “big news” in Indiana, a state that appears pivotal to stopping Mr. Trump from winning a majority of delegates. “John Kasich has decided to pull out of Indiana to give us a head-to-head contest with Donald Trump,” he said.

But at his own campaign stop in Philadelphia on Monday, Mr. Kasich tamped down Mr. Cruz’s triumphalism. Voters in Indiana, Mr. Kasich said, “ought to vote for me,” even if he would not be campaigning publicly there. He added, “I don’t see this as any big deal.”

Under the best of circumstances, the arrangement between Mr. Cruz and Mr. Kasich would seem to be a long shot — more of an expedient to stop Mr. Trump from taking a big step toward winning the nomination next week in Indiana than a permanent joining of forces.

Far from forming any kind of unity ticket, Mr. Trump’s surviving challengers have both vowed to triumph in an open convention in Cleveland, and they remain irreconcilable on key matters of policy. Their agreement dealt only with three states, leaving an open question as to how directly they might compete with each other everywhere else.

Even in Indiana, emerging as the most important state, the Cruz-Kasich pact appeared something less than decisive. While Mr. Kasich’s campaign canceled his public appearances in the state, the governor was still slated to visit Indianapolis on Tuesday for a fund-raising event at the Columbia Club. And he still had meetings scheduled with a series of Indiana Republicans, including Gov. Mike Pence, according to a leading Republican in the state.

Mr. Cruz’s campaign privately advised supporters on Sunday not to endorse tactical voting, whereby his supporters might switch their allegiance to Mr. Kasich in states where the Ohio governor is running stronger against Mr. Trump. “We never tell voters who to vote for,” read the suggested Cruz talking point. “We’re simply letting folks know where we will be focusing our time and resources.”

Mr. Trump, who has taunted his opponents throughout the race for their Keystone Kops approach to undermining his campaign, seemed to relish the continuing strain between his remaining rivals. On Twitter, he mocked “Lyin’ Ted Cruz” and “1 for 38 Kasich,” referring to the latter’s dismal winning record in the Republican race, for being unable to beat him on their own.

“So they have to team up (collusion) in a two on one,” Mr. Trump wrote. “Shows weakness!”

At a campaign rally in Rhode Island, Mr. Trump boasted that his opponents were united against him, and said he welcomed their “collusion.”

“Actually I was happy,” he said, “because it shows how weak they are.”

Allies of both Mr. Cruz and Mr. Kasich did not exactly disagree with that assessment, and acknowledged that the prospect of imminent disaster in Indiana had been the impetus to reach their deal, such as it is.

Still, aides to Mr. Cruz and Mr. Kasich seem acutely aware that they risk turning off voters who find the arrangement unseemly. Even before his rivals’ agreement, Mr. Trump had complained repeatedly that the nominating process was “rigged” against him.

With Mr. Trump expected to win all five of the East Coast states that vote on Tuesday, the next opportunity to slow his campaign will come a week later in Indiana. Republicans believe he must be stopped there if they are to deny him the nomination.

“Indiana is a must-win for Ted Cruz, and it’s a must-win for anybody who doesn’t think Donald Trump should be the nominee,” said David McIntosh, the president of the Club for Growth, a conservative group opposed to Mr. Trump and supportive of Mr. Cruz. The group is airing an ad in Indiana urging voters to vote for Mr. Cruz, not Mr. Kasich, to stop Mr. Trump, and officials said they intended to keep it on the air despite the agreement.

On Monday, Trusted Leadership PAC, a group supporting Mr. Cruz, said it also planned to keep a previously announced attack ad against Mr. Kasich on the air in Indiana. The group added, though, that it had shelved advertising plans in New Mexico and Oregon.

Charles R. Black Jr., an adviser to Mr. Kasich, said it would be helpful to his candidate — and “a big blow to Trump” — for Mr. Cruz to win Indiana. The point of announcing the deal, Mr. Black said, was to indicate to outside “super PACs” where the campaigns and candidates were marshaling their resources.

Mr. Black played down the degree to which voters would cast their ballots strategically, switching allegiance between candidates to thwart Mr. Trump. “Either the guy gets to 1,237 or he doesn’t,” he said. “Voters don’t focus on this tactical, inside baseball stuff.”

For months, rivals of the Republican front-runner have claimed that he has succeeded only because the anti-Trump vote has been spread among so many alternative candidates. That argument appeared to falter in New York last week, when Mr. Trump won 60 percent of the vote and captured nearly all of the state’s delegates.

Now that each of them has been granted a cleaner shot against Mr. Trump — in different states, and at different moments over the next few weeks — Mr. Cruz and Mr. Kasich will have no easy excuse if Mr. Trump continues to prevail.

Nick Gass at Politico takes note of many of the same signs that the Cruz-Kasich “alliance” is much less than meets the eye, while Trump himself is already pronouncing the alliance dead and seeking to turn the media spin to his advantage:

The “joke of a deal” between Ted Cruz and John Kasich to deny him the necessary number of delegates “is falling apart, not being honored and almost dead,” Donald Trump tweeted Tuesday morning, in the Republican front-runner’s first comments on a day he is expected to clean up at the polls along the Acela corridor.

“The Cruz-Kasich pact is under great strain,” Trump tweeted. “This joke of a deal is falling apart, not being honored and almost dead. Very dumb!”

Addressing confusion over the agreement on NBC’s “Today,” Kasich emphasized that his goal is not to stop Trump but to prevent Hillary Clinton from returning to the White House.

“I have laid out a strategy, and I have not told anybody to not vote for me. I’m just not there campaigning,” Kasich said. “You know what? When you don’t campaign in certain areas in any kind of a race, guess what? Your turnout goes down. I don’t tell people how to vote. I am not in that state right now. I will be in other states.”

It’s not surprising that this supposed deal, which as I said yesterday seemed to clearly be too little, too late, is turning out to be much less than meets the eye and that the weakness of the agreement itself is likely to be the chief reason that it falters, and that Donald Trump continues to triumph. In the end, all this agreement amounts to is an understanding from the two campaigns that they will spend most of their resources in the states where they expect to do the best going forward, but this is essentially meaningless because it appears to mirror what was likely going to happen anyway even without this announced agreement. Kasich had not been polling well in Indiana for several weeks, for example, which is why his campaign was already starting to focus on Oregon and New Mexico to begin with. The fact that they’ve now tried to characterize this as part of some kind of anti-Trump alliance really doesn’t accomplish anything since it plays right into Trump’s hands as something he can use to support his argument that the Republican delegate selection process is being rigged against him. If these two campaigns really were trying to team up against Trump then they either would have announced something far more formidable, or they wouldn’t have announced anything at all. Instead, they made a big deal out of what is essentially nothing and it’s not surprising that the deal, such as it is, is falling apart under scrutiny.

The other flaw in the deal, of course, is that there’s no way to guarantee that either candidates voters were going to support the other candidate. Even if Kasich’s did tell his supporters in Indiana that they should vote for Cruz, there’s no guarantee they’d do so. Some will, of course, but others are just as likely to vote for Trump, while still others stubbornly stick with Kasich and others just decide to stay home. This is true as well of Cruz voters in Oregon and New Mexico as well. Given that, this is clearly just an alliance in name only. Had something like this been formed months ago, it perhaps might have been successful but with Trump holding all the delegate cards, and at the point where he has won all of the states in the South except Texas and Oklahoma, and will likely end up winning every state on the East Coast with the exception of Maine, this alliance was always going to be little more than a joke.