Ted Cruz and John Kasich have come up with yet another plan to stop Donald Trump. 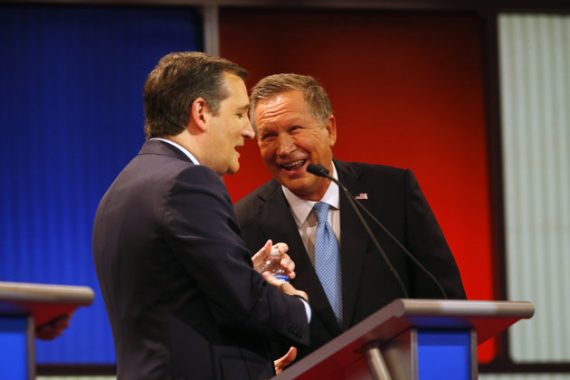 In what may be the final, desperate, parting shot of the effort of Republican insiders to stop Donald Trump from getting the delegate majority he needs to win the GOP nomination on the first ballot, Ted Cruz and John Kasich’s campaigns have apparently agreed to collude in upcoming primary states:

Senator Ted Cruz and Gov. John R. Kasich of Ohio have agreed to coordinate in future primary contests in a last-ditch effort to deny Donald J. Trump the Republican presidential nomination, with each candidate standing aside in certain states amid growing concerns that Mr. Trump cannot otherwise be stopped.

In a statement late Sunday night, Mr. Cruz’s campaign manager, Jeff Roe, said that the campaign would “focus its time and resources in Indiana and in turn clear the path for Governor Kasich to compete in Oregon and New Mexico.”

Minutes after Mr. Roe’s statement, the Kasich campaign put out a similar message. The Ohio governor’s chief strategist, John Weaver, said that his campaign would shift its resources to states in the West and “give the Cruz campaign a clear path in Indiana.”

Both campaigns said they expected allies and third-party groups to follow their lead, and a representative from the “super PAC” supporting Mr. Kasich confirmed late Sunday that it would not advertise in Indiana.

The arrangement is a striking departure for Mr. Cruz, who has in the past rebuffed calls from some Republican leaders — including members of the Kasich campaign and Mitt Romney, the 2012 Republican nominee — to divvy up states in an effort to complicate Mr. Trump’s path.

The move also signals a major shift in tone from the Cruz campaign toward Mr. Kasich, whom Cruz aides have long cast as a spoiler in the race. Mr. Cruz has openly questioned whether Mr. Kasich was auditioning to be Mr. Trump’s vice president.

But Indiana, which votes on May 3, is seen as critical to Mr. Cruz’s chances of keeping Mr. Trump safely beneath the delegate count required for the nomination. In a signal of Indiana’s importance, Mr. Cruz has held several events in the state in recent days, giving relatively little attention to the five states that vote on Tuesday, when he is expected to lose more delegates to Mr. Trump.

Mr. Kasich’s team had hoped to coordinate in this manner much sooner. Last month, at a debate in Miami, Mr. Weaver broached the possibility with Mr. Roe of splitting the remaining states in an effort to minimize Mr. Trump’s delegate haul. Mr. Cruz’s team rejected the overture, in part because it would have meant ceding the spotlight in high-profile contests, such as New York, in the Northeast and mid-Atlantic states. Mr. Weaver and Mr. Roe reached the accord this time and the two candidates did not discuss it, according to an adviser to Mr. Kasich.

What changed between the talks last month and now, according to Mr. Cruz’s advisers, is that there are few states left on the calendar and Mr. Cruz must stop Mr. Trump in Indiana.

Mr. Trump’s landslide victory in New York last week and an expected win Tuesday in a handful of Eastern states has demoralized those Republicans hoping to halt his candidacy. They fear that if he wins Indiana after his run of recent success, the appetite and financing to block him in the remaining states will dissipate. Indiana is also one of the few remaining states before California votes on June 7 where there is much indecision. The intervening states either clearly favor Mr. Trump or Mr. Cruz, or they will scatter their delegates through some proportional approach.

Public polling in Indiana shows Mr. Cruz trailing Mr. Trump, in part because Mr. Kasich is threatening to win a significant number of votes, particularly in the Indianapolis area, which is filled with more affluent Republicans. Indiana awards delegates based on congressional district results and the overall winner; five of the state’s nine districts include or immediately border the county that is home to Indianapolis.

The timing was crucial, too. Mr. Cruz now will have more than a week of campaigning in Indiana unimpeded by Mr. Kasich. And with Oregon starting its early voting this week, the two camps had to come to an agreement. At this late stage, it is unclear how effective the effort might be at swaying voters, especially if the campaigns do not give more explicit instructions. Unlike a similar gambit last month, when Senator Marco Rubio urged supporters in Ohio to vote for Mr. Kasich to slow Mr. Trump, there was no such request in the two statements on Sunday.

Mr. Weaver said the campaign was “very comfortable with our delegate position in Indiana already,” a reference to success in lining up individual delegates from the state to the national convention. (These delegate will be bound to the results of next month’s primary on the first convention ballot but will be free agents should there be subsequent ballots.) As for why Mr. Cruz’s campaign showed a willingness to deal now, Mr. Kasich’s advisers noted that he was in a stronger position when it rejected the overture that took place over a month ago.

As of late Sunday night, a website listing scheduled events for the Kasich campaign no longer included two rallies in Indiana that had been planned for Tuesday.

The abrupt change placed some campaign allies in an awkward spot. Trusted Leadership PAC, a “super PAC” supporting Mr. Cruz, announced on Friday that it planned to spend $1.6 million in Indiana, unveiling an attack ad against Mr. Kasich. “He just said Republicans have no ideas,” the group says of Mr. Kasich. “He’s right insofar as we have no idea why he is still running.”

Mr. Roe said the campaign planned to “compete vigorously to win” in any other states not mentioned in the statement. But Mr. Cruz’s advisers said he was willing to punt on Oregon and New Mexico, which together account for 52 delegates, because the campaign needed to offer states with approximately the same number of delegates as Indiana’s 57. And Oregon and New Mexico are proportional states, so they are not likely to hand either candidate a significant trove of delegates.

On paper at least, the strategy that Cruz and Kasich are engaging in here seems as though it may end up being too little, too late given the current momentum of the race. While being locked out of Indiana would make things difficult for Trump going forward, it would still be possible for him to walk into Cleveland with a slim majority of the delegates, or close enough to that majority to leave open the possibility that Trump could make a deal with the non insubstantial group of unbound delegates to give him a first ballot majority after all. Second, by jumping over the mid-Atlantic primaries that will be held tomorrow, where Trump seems to have a fairly substantial majority, this latest plan seems to concede yet another large chunk of of delegates to Trump that will make it even more likely that he will get the nomination an make any effort to deny him that nomination appear to the public to be a manipulation of the rules to undermine the will of the voters, a move that could cause real harm to the reputation of the GOP going forward. Additionally, the plan itself, which is obviously aimed more at using Indiana as the latest battleground on which to stop Trump seems more like just another example of a strategy that has already failed. Kasich supporters, for example, aren’t going to necessarily line up behind Cruz in Indiana regardless of what the Kasich campaign asks them to do, and Cruz supporters in Oregon and New Mexico aren’t necessarily going to line up behind Kasich. Finally, it’s worth noting that early and absentee voting has already started in Indiana so it’s already unclear just how much impact this pact can have on the race when there are already votes that are locked in. In all three states, there’s likely to be a substantial number of supporters of both candidates who stick with their candidate and at least some of them could react to these machinations by deciding to line up behind Trump just to bring the battle to an end. Given that Indiana is a Winner Take All state, it wouldn’t take much for Trump to win the state in that kind of environment.

In addition to the fact that it’s unclear if this plan can succeed, this plan by the Cruz and Kasich campaigns arguably plays right into the argument that Trump has been making for weeks now that the Republican nomination process is ‘rigged,’ a message that seems to be resonating quite strongly with voters. Even if he’s not right, the sight of two campaigns teaming up like this to not win a primary battle but prevent another candidate from winning in the hope that they can then manipulate the delegates on the convention floor regardless of what the voters might have to say about the matter is not likely to sit well with a lot of voters, and it’s one that could send voters into Trump camps out of continued frustration with an establishment that  is obviously more concerned with consolidating its own political power than representing the American public and dealing with the issues that the public cares about. It’s attitude such as this that has sent voters into the arms of candidates like Donald Trump and Bernie Sanders this year. Continuing it will only guarantee that voter dissatisfaction will get worse, that the political culture will become more polarized and cynical, and that nothing will get done.