Cory Booker's interest in running for President has been an open secret for some time, now he's being far less coy about it. 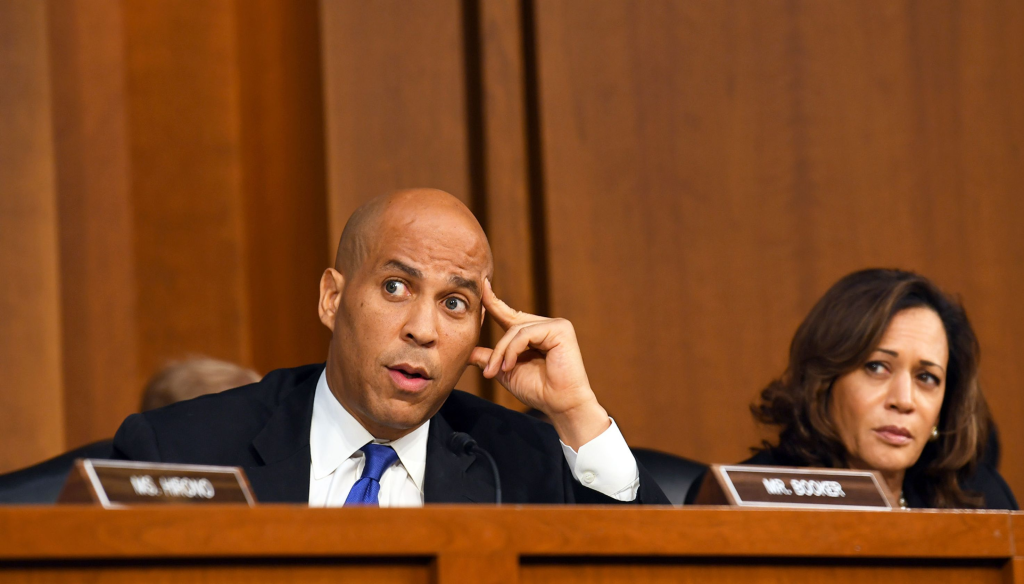 Count New Jersey Senator Cory Booker as the latest Democrat to stick his toe into the Presidential waters:0

MANCHESTER, N.H. — Senator Cory Booker of New Jersey says he will be deciding about running for president over the holidays. But as he blitzed through New Hampshire on Saturday in a whirlwind of selfies and soaring rhetoric about Americans finding “common purpose,” the 49-year-old Democrat sounded less like a candidate in a tentative early audition than one finishing off a dress rehearsal.

He chatted up diners in a Nashua coffee shop, speechified to a packed Manchester auditorium, gave sit-down interviews to local news media, met with Democratic influencers and was slated to attend three house parties in different cities across the state.

In dark jeans, a checkered blue dress shirt under a blue sweater and Nike hiking boots, Mr. Booker more than looked the part of a New Hampshire primary contender.

“This country has enough hate, enough bigotry, enough anti-Semitism,” he said in 20 minutes of remarks to about 300 party officials and activists in Manchester, the state’s largest city, speaking without notes and without mentioning President Trump. “What we need now is courageous actors who call to the conscience of our country a higher moral imagination, who call for a revival of civic grace.”

“I have a feeling I will,” Mr. Booker replied.

New Hampshire Democrats — who go second in the presidential nominating calendar after Iowans — said Mr. Booker has been among the most active in courting them ahead of 2020. Raymond Buckley, the state party chairman, pointedly introduced Mr. Booker to the crowd by saying no one this year had raised more money for the state Democratic Party and its candidates than Mr. Booker.

At a time when leading Democrats have often defined themselves in opposition to Mr. Trump — and activists across the country have proudly branded themselves “the resistance” — Mr. Booker’s slate of appearances offered an on-the-ground test for his more inclusive brand of politics that at times can feel like a throwback to a bygone era.

“You cannot lead the people if you do not love the people,” Mr. Booker told attendees at a house party in Nashua, where he only made passing mention of Mr. Trump’s name once. “Love is not a soft word,” he added. “It is hard.”

In a brief interview, Mr. Booker said he understood the desire among some Democrats for a more confrontational and combative tone in the Trump era. “I know there’s a lot of folks who may have an appetite for that,” he said. “It’s just not who I am, and I will continue to try to be as fearlessly authentic as I can.”

Will Mr. Booker’s approach work? “If it doesn’t, it doesn’t,” he said.

Mr. Booker has already carried his message to 24 states during the 2018 midterms, including the four that kick off the presidential nominating contest, campaigning for more than 40 candidates and raising more than $7 million for Democratic causes and campaigns, according to his aides. His New Hampshire swing is the last one on the calendar before his self-imposed timeline to make a final decision about running for president.

Back home, state lawmakers have cleared the path for Mr. Booker’s run. In November, the New Jersey governor signed a law that allows Mr. Booker to seek both the presidency and re-election to the Senate in 2020.

Accompanied on Saturday by three aides, Mr. Booker is further along in his New Hampshire outreach than some other would-be candidates. He and his team are reaching out to potential staff, and Mr. Booker has made calls to winners in the midterm elections, which saw Democrats take over both chambers of the State Legislature. Both new legislative leaders got personal calls from Mr. Booker.

Still, few are making any commitments in what is expected to be a crowded field of more than a dozen candidates that could include liberal senators from two neighboring states: Senator Elizabeth Warren of Massachusetts and Senator Bernie Sanders of Vermont, who won the New Hampshire primary in 2016.

Mr. Booker has a local political sherpa guiding him to the proper house parties and supplying a steady list of who to call. The guide, Jim Demers, is a New Hampshire lobbyist who was a key early supporter of Barack Obama’s 2008 primary campaign when Mr. Obama was a senator.

Mr. Booker’s appearance at Saturday’s victory party, Mr. Demers noted, was the same event at which Mr. Obama made his New Hampshire debut in 2006, though that marked the first time Mr. Obama had stepped foot in the state and he was greeted by greater fanfare. The hosts of the Nashua house party that Mr. Booker attended Saturday also hosted Mr. Obama’s first house party.

“I think the Booker approach is effective,” said Jim Donchess, the mayor of Nashua, who met with Mr. Booker on Saturday morning for nearly an hour. “We need to heal some of the divisions and mistrust.”

Before being elected to the Senate in October 2013 in the wake of the death of Senator Frank Lautenberg and then re-elected to a full term in 2014, Booker had made a name for himself as the Mayor of Newark, New Jersey with a reputation for patrolling the city at night and using his Twitter feed to communicate with and respond to city residents on any number of subjects. Since being elected, Booker has made a name for himself by championing a number of issues, including criminal justice reform, an area where he has reached across the aisle and partnered with Kentucky Senator Rand Paul on issues such as sentencing reform and other issues. Most recently, Booker received national attention, and praise from fellow Democrats, for his question of Justice Brett Kavanaugh both during the first round of substantive hearings and during the reopened hearings aimed at investigating the allegations made by Dr. Christine Blasey Ford and other women regarding sexual abuse. Many critics said that Booker was over the top in those proceedings, but considering the fact that most of those critics were Republicans that criticism likely helped Booker among his fellow Democrats.

Inevitably, Booker was the subject of Presidential speculation virtually from the time that he walked into the Senate, with many of his more ardent fans drawing a parallel between him and former President Obama. There was even some speculation that he might have entered the race for the Democratic nomination, although that speculation was probably premature. More realistic, I suppose was the speculation that occurred later in the election cycle that Booker might be an ideal running mate for Hillary Clinton, speculation that continued well into July and the eve of the Democratic National Convention. While Clinton ultimately selected Virginia Senator Tim Kaine for the spot, it does appear that Booker was being seriously considered for the post.

In any case, much like several other candidates, Booker has said that he will consider whether or not he will actually enter the race for the Democratic nomination over the holidays and seems likely to make a formal decision in early 2019. Based on his recent travels, though, it seems clear that the New Jersey Senator is at the very least seriously considering the idea. If he does, then he’s likely to find himself catapulted into the A-List group of candidates along with other names such as Kamala Harris, Elizabeth Warren, Bernie Sanders, and others in what is likely to be a very crowded field of candidates at least at the beginning of the race. Whether he stays there will depend both on where he ends up standing in early polling once people start paying attention to the race, what kind of endorsements he’s able to get from prominent Democrats, and how he performs on the campaign trail.

As things stand, I suspect that Booker is likely to be a strong candidate going forward, especially among the Democratic Party’s progressive wing, but in that respect, he’ll have a lot of competition on his hands. Most notable among this, of course, will be candidates and potential candidates such as Elizabeth Warren, Bernie Sanders, and California Senator Kamala Harris, among others. In the past, Booker has sought to play the role of a candidate with one foot in both wings of the Democratic Party, the more traditional Clintonian center-left wing from which he arguably comes and the progressive wing. Because of that, and thanks to the fact that he has received significant financial support from many of the financial and pharmaceutical industries that dominate in New Jersey, he’s been subject to some progressives who apparently think he isn’t “pure” enough. How that will impact him if he does run will be worth watching.