There aren't nearly as many "meta" lessons in Eric Cantor's loss as pundits have been claiming. 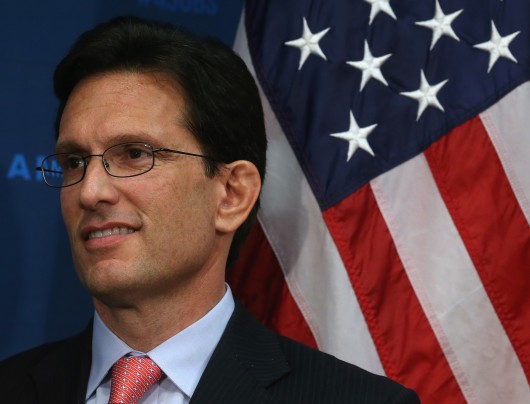 Outside of the ongoing violence in Iraq, the big story of the week, of course, has been the defeat of outgoing House Majority Leader Eric Cantor by a primary opponent who had raised less money in campaign donations than the Cantor campaign had spent on steak dinners at several of the top steakhouses in Washington, D.C. Depending on who you talk to, the Republican Primary in Virginia’s 7th Congressional District is a massive victory for the Tea Party, a referendum on immigration reform and a signal to the powers that be in the GOP that they shouldn’t move on the issue this year, the opening shot in a battle between populist and pro-business forces in the GOP, or the rise of an ideology inside the GOP that is even further to the right than the party has been to date. To some degree, I’ve agreed at one point or another over the past three days with each one of these propositions, but in the end I am beginning to wonder if the race means a lot less than the pundits have been claiming.

As of the beginning of the week, Cantor was the last office holder with any exceptional power who had a primary in front of him. Others had already vanquished their challengers with little or no fanfare. If this had happened several weeks ago, a surge of activist energy could plausibly have spilled over into other crucial races. Instead, conservative activists will have to content themselves with the hope that Cantor’s defeat presages upsets in Kansas and Tennessee, where Senators Pat Roberts and Lamar Alexander are still facing primaries. The two big outstanding ones.

The problem for them is that the House Majority Leader, though powerful, is also just a congressman. In a single district-level primary, it’s feasible for a handful of right wing radio hosts to mobilize the margin of victory, particularly when the incumbent has slept through the race. That strategy, such as it was, will be harder to pull off in a state-wide race. This is the paragraph I will regret writing if Roberts and/or Alexander collapse. But even if that happens, it will be impossible to attribute their losses retrospectively to what happened in Virginia this week. And the rest of the argument will be unaffected.

Cantor’s defeat probably didn’t imperil or kill any major bills. It may have sent them downriver in body bags, but they weren’t going to pass anyhow. That probably includes immigration reform—the one issue that supposedly (though not actually) did Cantor in. But the great irony in all this is that McCarthy hails from a California district with a large immigrant population and is much more favorably disposed toward comprehensive reform than Cantor was.

Looking way ahead to September, I suppose it’s possible that a cabal of disenchanted hardliners will decide to make something of all this by trying to shut down the government again. But unless it was part of an elaborate conspiracy to sacrifice GOP seats as a pretext for ousting John Boehner, it’d be an incredibly weird, delayed primal scream, and suggestive of a strange unfamiliarity with how Cantor’s exit changes the balance of power in Congress.

I’d go even further. Cantor’s loss was a shock because no one predicted it. And of course, Cantor was a big wheel. But all the talk about the rise of right-wing populism or a civil war with the GOP or the victory of the tea party is just nonsense. It’s just flatly not there.

Look. Cantor fucked up and something weird happened in Virginia’s 7th district. But guess what? There have been lots of other primaries too this year. In some of them a tea-party conservative has won. In most of them, the incumbent won. When you look at the broad picture, you can’t pretend that Cantor’s loss overwhelms everything else. It doesn’t. It’s one primary, and it counts as one primary. And that means the broad picture is about the same as everyone thought a week ago: the Republican Party is becoming more conservative; the tea party largely controls the party’s agenda in Congress; and occasionally there are going to be some primary upsets. As near as I can tell, there haven’t been any more this year than in 2010 or 2012.

So don’t let the shock of Cantor’s defeat get to you. It’s shocking mainly because all the pollsters got it wrong.

After reading through several days of pundits pontificating on the great question of what Cantor’s loss “means,” whether it’s what it means for American politics, the Republican Party, the state of immigration reform, or the rest of the 2014 election cycle, I think Beutler and Drum have got it about right. Without question, Cantor’s loss to a candidate that nobody had given much of a shot to was a shock, not the least because he was the first House Majority Leader to lose a fight for his own party’s nomination for his own seat since the position was created in 1899. Cantor’s departure will definitely have an impact on the how Congress operates at the least in the sense that, going forward, someone else is going to be Majority Leader for the rest of the year and going forward into the new year. Additionally, even though there’s plenty of evidence to indicate that immigration reform wasn’t the decisive issue in the race, it’s probably the case that we won’t see an immigration bill out of the House this year. To be honest, though, that was always a long shot to begin with.  Finally, at least in the short term David Brat’s victory against seemingly insurmountable odds will provide some energy to Tea Party challengers in places like Mississippi and Kansas where Senate races are still pending, but, as Beulter notes, it takes a lot more momentum to win a statewide Senate race than it does to win a House race.

None of this is to suggest that Cantor’s loss isn’t big news, of course. As I noted above, we’ve never seen something like this happen to a sitting House Majority Leader before, and it’s like to be a long time before we see it happen again. However, it’s a mistake to draw broad political conclusions form an isolated event like this. It’s true that immigration reform, the ongoing Tea Party v. Establishment battle in the GOP, and the whole issue of Tea Party populism as opposed to the GOP’s traditional ties to Wall Street and big business, all played a role in the race between Cantor and Bratt. Those issues are also ones that we will be seeing play out in American politics for some time to come. If you’re looking for the reason why Eric Cantor lost, though, it makes sense to look at something much more mundane, namely the fact, as Tom Dougherty points out, that Cantor seems to have forgotten that your District comes first regardless of how high up in leadership you happen to be:

On condition of anonymity, I spoke with a Republican operative who was not connected directly with the Cantor campaign, but is a resident of the Richmond area and is wired into Virginia politics. He told me there were clear signs in late 2013 that support for Cantor was waffling. The voters were increasingly seeing Cantor as out of touch with them, and that Cantor’s campaign was made aware of the situation.

What Cantor’s people did, or maybe more concisely did not do, with the information will be a topic of discussion for weeks to come, but it is clear today they mishandled it or paid it far too little attention.

A long-ago mentor of mine used to refer to “Leadership Syndrome” where members of party leadership can easily get wrapped up in the inner-workings of the party while finding false security in their would-be invincibility. It’s a double-edged sword that can be, and has been fatal before for others, though not at this level

The essence of the syndrome is no one can ever forget that first and foremost they are elected, and reelected, by their constituents. Losing sight of that, or thinking their leadership position somehow insulates them against serious opposition, is a huge mistake.

Though not in a leadership position, this is why Graham won handily; as did John Boehner and Mitch McConnell. All three had trusted advisors on the ground in their home district or state, and none took anything for granted, so they actually campaigned in their primary.

Graham recognized his own vulnerability early on; formed a definitive plan of action, set about establishing an effective ground game, and suffocated most serious challenges right from the start. His campaign reaped the rewards on Tuesday night with an impressive win. Jamie Self, writing for The State, has an excellent article about the Graham campaign that provides substantial insight into Graham’s success.

Cantor’s campaign on the other hand took a different, and in hindsight, more disastrous tact. As previously noted, Cantor was already losing touch with his district, but made few moves toward his constituency. Whether he was misadvised as to the real threat, was too engulfed in his daily responsibilities on Capitol Hill, or fell victim to overconfidence, is open to question. However, the lack of early action started the Cantor campaign down a path that was troubling.

What Cantor did do, as Jeff Schapiro wrote in the Richmond Times-Dispatch, was try to manipulate the electoral process in Henrico County in March. This was a move that failed and created significant backlash, and resulted in the ousting of a Cantor ally as chairman at the district convention in May.

Still the Cantor campaign persisted with the invincibility attitude, albeit acknowledging the race may be tighter than previously thought. They did little in the way of putting boots on the ground, let alone the candidate himself. This was the fatal mistake that ultimately cost Eric Cantor his seat in Congress and his position as Majority Leader.

In other words, Cantor made what seem in hindsight to be a bunch of rookie mistakes and he paid the price for it. It’s surprising that someone who has been in Congress since 2001, and was a member of the Virginia House Of Delegates for a decade before that, would lose sight of the fundamental rule of politics, which is to always pay attention to your constituents, but that’s what happened. As Tom notes, other “targeted” incumbents such as Boehner, McConnell, and Graham won in no small part because they obviously didn’t lose sight of that rule. In the end, that’s the biggest lesson of Cantor’s loss. 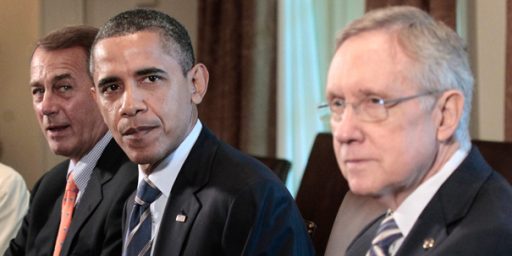