Coming to a television set or Internet livestream near you sometime after Memorial Day. 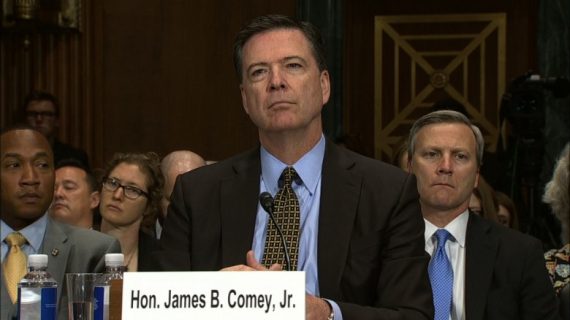 Former F.B.I. Director James Comey has agreed to testify in public before the Senate Intelligence Committee:

WASHINGTON — James B. Comey, the former F.B.I. director, will testify publicly about his role in the investigation into Russian meddling in the election and any possible connections to the campaign of President Trump, the Senate Intelligence Committee announced Friday.

Mr. Comey’s handling of the investigation, including his several conversations with Mr. Trump since his election, has taken on added importance since his dismissal and subsequent reports that the president had asked Mr. Comey to shut down part of the inquiry, and then later called him a “nut job” in meetings with Russian officials.

“I am hopeful that he will clarify for the American people recent events that have been broadly reported in the media,” said Senator Richard M. Burr, Republican of North Carolina and the chairman of the committee. Senator Mark Warner, Democrat of Virginia, said he expected Mr. Comey to “shed light on issues critical to this committee’s investigation of Russian interference in the 2016 election.”

The announcement that Mr. Comey would testify followed closely the disclosure by the Justice Department that Rod J. Rosenstein, the deputy attorney general, had talked with Attorney General Jeff Sessions about replacing Mr. Comey last winter, before either man had been confirmed for his position in the Trump administration.

Mr. Rosenstein revealed that detail in two briefings to members of Congress this week, according to remarks released Friday by the Justice Department. His testimony provides fuller details about Mr. Trump’s termination of the top law enforcement official investigating whether his campaign colluded with the Russian government to influence the outcome of the 2016 election

According to a CNN report, Comey is expected to testify that it is his belief that President Trump was attempting to influence him in the conduct of the investigation into Russian interference in the election and the Trump campaign’s ties to Russia during their February conversation regard Lt. General Michael Flynn and at other times:

Former FBI Director James Comey now believes that President Donald Trump was trying to influence his judgment about the Russia probe, a person familiar with his thinking says, but whether that influence amounts to obstruction of justice remains an open question.

“You have to have intent in order to obstruct justice in the criminal sense,” the source said, adding that “intent is hard to prove.”

The central question at that blockbuster hearing will be whether Comey believed the President was trying to interfere with his investigation.

At a news conference Thursday, Trump angrily denied that he had asked Comey to end the investigation, which is now in the hands of new special counsel Robert Mueller. The President blasted the probe into Russia’s involvement in the 2016 election and possible collusion with his campaign as a “witch hunt.”

Comey’s view of Trump’s intent in their conversations is nuanced, sources say. He initially believed that he could school the new President and White House in what was appropriate during their communications.

But after his firing, the question of Trump’s intent could become more problematic, one source said. Trump told NBC’s Lester Holt in an interview that he was thinking “of the Russia thing” when he dismissed Comey.

Sources say Comey had reached no conclusion about the President’s intent before he was fired. But Comey did immediately recognize that the new President was not following normal protocols during their interactions.

As The New York Times has reported, after numerous encounters with the administration, Comey felt he had to set the parameters of appropriate protocol very clearly. After the President asked Comey to let it be known publicly he was not under investigation, Comey told the President that if he wanted to know details about the bureau’s work he should ask the White House counsel to communicate with the the Justice Department, according to the Times.

According to one source with knowledge, Comey’s relationship with Trump was uncomfortable from the start. The director had some hope that, over time, he could effectively point out the appropriate procedures and guidelines to both Trump and the White House staff about how the process of communications normally works. It didn’t turn out that way.

One Comey memo reportedly claims that Trump asked the FBI director to “let this go”– referring to the FBI investigation into Gen. Michael Flynn’s contacts with the Russians — although the President himself has flatly denied that he ever did that.

While it is unknown whether the President has either tapes or notes of his conversations with Comey, the FBI director kept meticulous memos and shared them with his team contemporaneously.

Other than the fact that it will occur after Memorial Day, no date has been announced for Comey’s testimony, but it will no doubt be covered by all of the cable news networks and probably by the broadcast networks as well. One thing that will be interesting to see from these hearings will be the extent to which there is a partisan divide on the normally bipartisan Senate Intelligence Committee. Democrats, no doubt, will want to focus on the substance of Comey’s conversations with the President and contents of whatever memoranda documenting those meetings he may provide to the committee may say. Republicans, on the other hand, are another matter and it will be interesting to see if they rush to the defense of the President or if they are more circumspect in their fact-finding.

As for the contents of Comey’s testimony, this would include not only the February meeting at which Trump reportedly asked Comey to drop the investigation of his former National Security Adviser Michael Flynn but also other conversations between the two, some of which are discussed in a post at the Lawfare blog by Benjamin Wittes, who happens to be close personal friends with Comey and had lunch with him many times during the time Comey served as F.B.I. Director. While Wittes essay does not get into the details of Comey’s conversations with the President per se, and understandably does not offer insights into the status of the Russia investigation itself, it nonetheless is an interesting read that provides some interesting insights into the discomfort that Comey was feeling in his relationship with this President long before his firing earlier this month. At least part of that discomfort, of course, was due to the fact that the Bureau was (and still is) actively investigating the President’s own campaign, but it also seems apparent that Comey felt that Trump either doesn’t understand that rules that ought to govern his relationship with an official like the head of the F.B.I. or that he quite simply doesn’t care about those rules. Whichever it is, it clearly seems to have led Trump to continually put Comey in an uncomfortable position that we’re likely to get more detail about when Comey appears before the Committee.

Much like the testimony of top government officials in the middle of Presidential scandals in the past, Comey’s testimony has the potential to become a turning point in both the public investigation into the whole matter of Russian interference in the election and everything that has emanated from it, including what many are now openly alleging was an attempt by the President of the United States to quash that investigation both in his conversations with Comey and, as he apparently acknowledged in discussions with the Russian Foreign Minister and Ambassador to the United States, his decision to fire Comey earlier this month. In that respect, it will no doubt be as dramatic as past events such as the testimony of John Dean before the Watergate Committee, the testimony of Oliver North and John Poindexter before the Iran-Contra Committee, or, more recently, Hillary Clinton’s testimony in October 2015 before the Special House Committee investigating the attack on the diplomatic outpost in Benghazi. In Comey’s case, the testimony will carry with it the tension inherent in the idea that he will essentially be accusing the President of the United States of obstruction of justice, a charge that was made against both Richard Nixon prior to his resignation and President Clinton during his impeachment hearing. Given that, the consequences of that testimony could end up being quite significant.