The John Edwards trial is over. This should be the end of the matter. 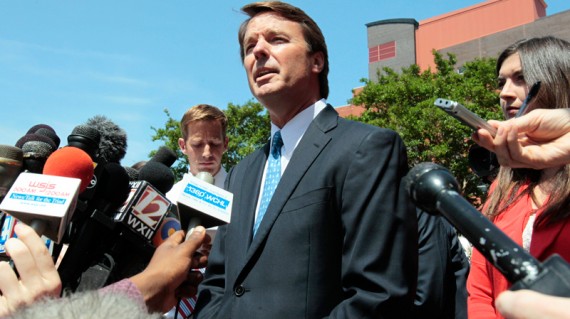 The jury in the John Edwards case entered its 9th day of deliberations today with many people wondering if we might be reaching its end point. It had been several days since they had requested any additional evidence or re-read testimony from the Judge, and had requested that they be allowed to leave early tomorrow so that many of them could attend family graduations that would be taking place.  So, there was some anticipation that things would be wrapping up soon.

Then, things got weird.

Around mid-afternoon, the media was advised that the jury had reached a verdict, but by the time everyone had reassembled in the courtroom, it turned out that they had actually only reached unanimity on one count and could not reach a verdict on the other five. That in and of itself was a bizarre development, but it may have been the result of a miss-communication between the Court and the jury. In any event, when the Judge presiding over the trial realized that the jury had not fully decided the case, she read them a modified version of what is known among trial attorneys as an Allen Charge, which essentially directs a jury that claims to be deadlocked to make its best efforts to reach a final verdict as to all the matters before it. Within less than two hours after being read that charge, though, the case was over and John Edwards was essentially a free man:

Greensboro, North Carolina (CNN) – A federal jury in North Carolina acquitted former Democratic presidential hopeful John Edwards on one count of violating campaign finance law Thursday and deadlocked on the five other counts against him.

U.S. District Judge Catherine Eagles declared a mistrial on the remaining counts, leaving prosecutors to decide whether to refile the charges against the onetime North Carolina senator.

Jurors said Thursday afternoon — their ninth day of deliberations — that they had reached a unanimous verdict on only one count, which involved allegations that Edwards had accepted illegal campaign contributions in 2008. Eagles ordered them back into the jury room to continue deliberating, but they returned less than an hour later to announce they were deadlocked.

“This was win for John Edwards, and there will be a lot of questions about why this case was brought,” CNN legal analyst Jeffrey Toobin said after the announcement.

Edwards had been charged with four counts of accepting illegal campaign contributions, one count of falsifying documents and one of conspiring to receive and conceal the contributions. The charges could have carried a maximum sentence of 30 years in prison and a $1.5 million fine.

Jurors last week asked to review all the exhibits, indicating they were in it for the long haul.

Defense attorneys argued that Edwards was guilty of nothing but being a bad husband to his wife, Elizabeth, who died in 2010. They also argued that former Edwards aide Andrew Young used the money for his own gain and to pay for Hunter’s medical expenses to hide the affair from Edwards’ wife.

Neither Edwards nor Hunter testified during the trial. The affair occurred as Edwards was gearing up for a second White House bid in 2008, and he knew his political ambitions depended on keeping his affair with Hunter a secret, Assistant U.S. Attorney Robert Higdon told jurors in closing arguments.

“There is no question it would destroy the campaign of John Edwards,” Higdon said.

This result isn’t entirely unexpected. I didn’t follow the Edwards trial on a regular basis, but from what I have followed over the past month it seemed fairly clear to me that the prosecution’s case was incredibly weak to say the least. As I noted in a post I wrote when the trial was just starting, the argument at the center of the prosecutions case was that the money that Edwards’s supporters were funneling to Rielle Hunter, none of which ever went through the Edwards campaign itself, was essentially a campaign donation because it was intended to suppress the story of Edwards having an affair and fathering a child so that his campaign would not be damaged. However, as the Editors of National Review, hardly people who are sympathetic to John Edwards politically, said in an editorial last month, that doesn’t mean it was or should be a crime:

The prosecution’s case is built upon a note from Mellon, who described herself as “furious” about the way in which Edwards was lampooned for his infamous $400 haircuts. “From now on,” she wrote, “all haircuts, etc., that are necessary and important for his campaign — please send the bills to me. . . . It is a way to help our friend without government restrictions.” And she did indeed write some $725,000 in checks for sundry expenses — all of which went to Hunter, not to the Edwards campaign.

Because none of the money went to the campaign, and none of the money went for campaign expenses — inasmuch as maintaining a mistress is not a campaign expense — it is difficult to see why this should be prosecuted as a campaign-finance violation. At most, the evidence would seem to justify charging Mellon with conspiring to subvert campaign-finance laws, though in the event those laws were not subverted, since her money did not go toward financing the Edwards campaign.

Campaign-finance laws are a tricky business, because they put political incumbents in charge of setting the rules under which their positions and their power may be challenged. Such laws should be as transparent and straightforward as possible, and prosecutions under them should be undertaken with proper care. If Edwards et al. have committed other crimes, then they should be prosecuted, but to prosecute him under campaign-finance rules in a situation in which no campaign funds were used and no campaign expenses paid seems a stretch. We have had enough unseemliness associated with Edwards without adding a questionable prosecution to the catalog.

Indeed. In fact, I would argue that, had Edwards been convicted today, he would have had an excellent chance of having that conviction set aside on appeal.

Of course, the legal matters in this case are not over yet. There are still five outstanding counts that Edwards could theoretically be re-tried on. My personal opinion, given the way in which this trial unfolded, is that the Federal Government should decline to bring this case back before a jury. They had a trial that lasted more than a month, the jury deliberated for countless numbers of hours over the course of nine days, and they acquitted him on one charge and could not reach agreement on the others. There are plenty of adjectives that can be used to describe John Edwards, and I don’t think I need to repeat any of them here, but I just don’t see the need to put before yet another jury a case that most likely will end in deadlock the second time around.