One of the legal giants in the Federal Judiciary has retired from the bench. 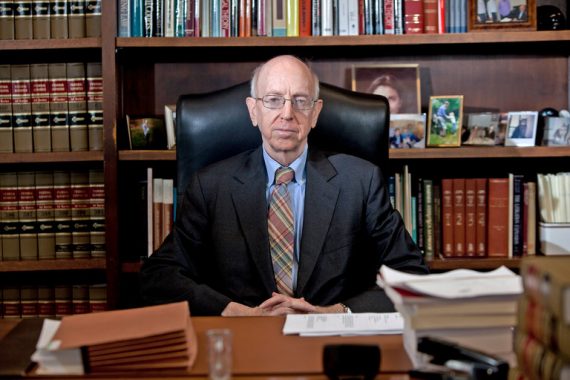 Shortly before the start of the Labor Day Weekend, Judge Richard Posner, who has served on the 7th Circuit Court of Appeals since December 1981, announced his retirement after nearly thirty-six years of service to the legal profession and his country:

Judge Richard A. Posner, one of the nation’s leading appellate judges, whose acerbic wit attracted an almost cultlike following within legal circles, is retiring after more than three decades with the 7th U.S. Circuit Court of Appeals in Chicago.

Posner, 78, is stepping down effective Saturday, according to a news release Friday afternoon from the 7th Circuit. He was appointed to the court by President Ronald Reagan in 1981 and served as its chief judge from 1993 to 2000.

Posner said in a statement he has written more than 3,300 opinions in his time on the bench and is “proud to have promoted a pragmatic approach to judging.” He said he spent his career applying his view that “judicial opinions should be easy to understand and that judges should focus on the right and wrong in every case.”

Posner’s biting and often brilliant written opinions as well as his unrelenting questioning from the bench have made him an icon of the court for years.

Known as a conservative at the time of his appointment, Posner’s views skewed more libertarian through the years, and he often came down in favor of more liberal issues such as gay marriage and abortion rights.

Lawyers who regularly appeared before the 7th Circuit knew that when Posner was on a panel they had to be ready for a line of questioning that could come out of left field. The salty judge was known to abruptly cut off lawyers who he thought were off-point, often with a dismissive “No, no, no!” delivered in his trademark nasal tone.

“He’s a brilliant man who seems to relish in a vigorous dialogue with counsel, even if it didn’t always seem to be directly related to the case,” said Ronald Safer, a former federal prosecutor and now a partner at Riley, Safer, Holmes & Cancila. “You are always on edge and you have to be at your sharpest whenever he is on the bench.”

Posner seemed to be well aware of his image and never backed down from it. In a 2001 profile in The New Yorker, he described himself as having the same personality traits as his beloved cat, Dinah: “Playful, but with a streak of cruelty.”

He’s also been an outspoken critic of the current state of the U.S. Supreme Court, telling a Hyde Park gathering in an appearance last year that he thought the country’s high court was “awful” and the result of a process that had become too political.

“I think it’s reached a real nadir,” Posner said at the Seminary Co-Op Bookstore. “Probably only a couple of the justices, (Stephen) Breyer and (Ruth Bader) Ginsburg, are qualified. They’re OK, they’re not great.”

Posner was also in the headlines in 2012 when then-Justice Antonin Scalia accused him of lying about the justice’s new book in a review published in The New Republic.

In the review, Posner had accused Scalia of deviating from his own strict, text-based approach to interpreting law when he struck down a District of Columbia handgun ban in 2008 by considering the legislative history behind the law.

Scalia responded to the review by saying, “To say that I used legislative history is simply, to put it bluntly, a lie.”

Posner at the time declined to comment on the flap.

Judge Diane Wood, the chief of the 7th Circuit, said in a statement Friday that Posner is one of the “leading public intellectuals” in the world whose impact “is immeasurable.”

“His opinions have had an impact around the world,” Wood said. “He has produced an unparalleled body of scholarship — books, articles and public commentary — covering virtually every legal topic that can be imagined.”

In a 2014 opinion upholding lower court decisions that found same-sex marriage bans in Indiana and Wisconsin unconstitutional, for example, he described the gay and lesbian community as among the most “misunderstood, and discriminated-against minorities in the history of the world” and said that the denial of their right to marry has been a source of “continuing pain.”

“Marriage confers respectability on a sexual relationship,” wrote Posner. “To exclude a couple from marriage is thus to deny it a coveted status.”

Posner had particularly harsh words for the argument made by attorneys for Indiana that marriage is intended only for procreation and therefore only heterosexuals should benefit from the perks of matrimony, such as filing taxes jointly. The judge noted that infertile heterosexuals were free to marry — even first cousins. He said Indiana had “invented an insidious form of discrimination: favoring first cousins, provided they are not of the same sex, over homosexuals.”

At times, Posner clashed with his fellow judges at the Dirksen U.S. Courthouse, particularly U.S. District Judge Milton Shadur, a President Jimmy Carter appointee who ironically is also stepping down from a lengthy career on Friday.

Posner once removed Shadur from a civil case in 2002 because he had supposedly let slip in front of the jury too many of his own views about one side’s case.

And in 2009, Posner ripped Shadur’s sentence of probation for former Chicago Ald. Edward “Fast Eddie” Vrdoyak, who had been convicted in a multimillion-dollar real estate corruption scheme. In a testy exchange with Vrdolyak’s lawyers during oral arguments, Posner said sparing Vrdolyak prison time was a “nothing” punishment.

Posner also was not afraid of criticizing lawyers, sometimes to comical effect. In a 2011 case, he chastised a plaintiff’s lawyer for ignoring precedent and referred to the tactic as “ostrich-like.” Posner then illustrated his point by including photos of an ostrich and a man in a suit with their heads in the sand in his published opinion.

Joel Bertocchi, a former federal prosecutor and expert in appellate law who has argued before Posner dozens of times, said he learned that Posner’s academic style was to use rigorous argument as a way of testing whose views stood up to scrutiny

Posner’s retirement is likely to garner much commentary from the legal blogosphere in the coming days if only because his long service, among the longest-serving of recent Judges appointed to any of the Courts of Appeal, has guaranteed that he will have as much impact on American law in the future as he has had in his three decades of service. Among the initial comments I’ve been able to find are those from Ilya Somin and Jonathan Adler at The Volokh Conspiracy, both of him note the objections they have had with some of Posner’s rulings over the years while also acknowledging both his intellect and the insightful and often quite witty manner in which he approached the cases that came before him. As with any Judge who has spent nearly 40 years on the bench, Posner was a prolific author of opinions, and the more than 3000 that he has written include subject matter ranging from the mundane to the headline grabbing. In recent years, though, he has perhaps become best known for his opinions concerning cases involving same-sex marriage and voting rights. In the first category, Posner was the author of the Seventh Circuit Court of Appeals opinion that struck down the laws banning same-sex marriage in Wisconsin and Indiana, an opinion that was ultimately upheld when the Supreme Court declined to accept the case for appeal. Not surprisingly, Posner’s opinion was unique and hard hitting and quickly became potent ammunition for lawyers challenging similar laws in other states as well as the Supreme Court’s opinion in Obergefell v. Hodges, which struck down the remaining state laws banning same-sex marriage in June 2015. On the second issue, Posner was the author of the Seventh Circuit opinion that upheld Indiana’s Voter ID law, one of the first such laws in the country, a decision that was also upheld by the Supreme Court. In later years, though, Posner became known as a skeptic of such laws and authored a scathing dissent to an opinion upholding Wisconsin’s Voter ID law. In that dissent, Posner became sharply critical of the law based on its impact on minority voters but insisted that he had not deviated from the position he took in the Indiana case years earlier.

As noted Posner was also known as one of the primary advocates of what came to be called “law and economics,” a discipline that seeks to examine and analyze the law using the principle of microeconomics. While this method of analysis was not always apparent in Posner’s opinions, he was among the field’s leading scholars along with men such as Ronald Coase and fellow Seventh Circuit Judge Frank Easterbrook, who has been on the Federal bench since 1985 and often joined Posner in opinions when the two served on panels together. In this regard, Posner has been the author of several groundbreaking books and law review articles on the subject and has spoken at several academic symposia. As a Judge, meanwhile, though Posner was appointed by a conservative President he always had more of a libertarian streak to him in the style of other Court of Appeals Judges such as Alex Kozinski, the aforementioned Judge Easterbrook, and Supreme Court Justice Anthony Kennedy. As noted above, though, he recently became more well-known for what seemed to be deviations from his previously stated views, along with what seemed like a stealth war of words with the late Justice Antonin Scalia. Additionally, it has been said, although not directly quoted, that the 2008 recession and its aftermath had led Posner to question some of the underlying assumptions of her previously stated judicial philosophy.

That being said, even when I disagreed with him I have always found Judge Posner to be among the most provocative, intelligent, and thought-provoking Judges on the Federal bench. In both his opinions and dissents, he was an ardent guardian of the law and of the proper interpretation of statutes and the Constitution from his point of view. In addition, he has been the author and co-author countless books, law review articles, and other publications on a wide variety of topics that ranged from his core area of what became known as Law and Economics to human sexuality and its relationship to the law. At a younger age, he would have been an excellent addition to the Supreme Court of the United States, and it would have been interesting to see him crossing intellectual swords, and working with, Justices such as Antonin Scalia and Ruth Bader Ginsberg. Nonetheless, thirty-six year on the bench in the 7th Circuit is a long time to serve, and his position has allowed him to rule and participate in the consideration of a wide variety of issues that the courts have been dealing with for the past four decades. No doubt, his writings on these issues will have an influence on the law for years to come.