June Jobs Report: Good News For The Start Of A Holiday Weekend

Because tomorrow is the Fourth of July, the June Jobs Report was released a day early today, and it gives the nation some good news heading into the long holiday weekend:

In June, the unemployment rate declined by 0.2 percentage point to 6.1 percent. The  number of unemployed persons decreased by 325,000 to 9.5 million. Over the year, the unemployment rate and the number of unemployed persons have declined by 1.4 percentage points and 2.3 million, respectively. (See table A-1.)

Among the major worker groups, the unemployment rates for adult women (5.3 percent) and blacks (10.7 percent) declined in June, and the rate increased for teenagers
(21.0 percent). The rates for adult men (5.7 percent), whites (5.3 percent), and Hispanics (7.8 percent) showed little change. The jobless rate for Asians was 5.1
percent (not seasonally adjusted), little changed from a year earlier. (See tables A-1, A-2, and A-3.)

In June, the civilian labor force participation rate was 62.8 percent for the third consecutive month. The employment-population ratio, at 59.0 percent, showed little change over the month but is up by 0.3 percentage point over the year. (See table A-1.)

Total nonfarm payroll employment rose by 288,000 in June. Over the past 3 months, job growth has averaged 272,000 per month. In June, employment growth was widespread, led by gains in professional and business services, retail trade, food services and drinking places, and health care. (See table B-1.)

Employment in professional and business services rose by 67,000 in June and had averaged 53,000 per month over the prior 12 months. In June, employment within the industry increased in management and technical consulting services (+8,000), architectural and engineering services (+7,000), and computer systems design and related services (+7,000). Employment continued to trend up in temporary help services.

Retail trade employment increased by 40,000 in June. Over the prior 12 months, employment in this industry had grown by an average of 26,000 per month. In June, job growth in the industry occurred in motor vehicle and parts dealers (+12,000), building material and garden supply stores (+8,000), and electronics and appliance stores (+7,000).

Employment in food services and drinking places rose by 33,000 in June and has increased by 314,000 over the past year.

Health care employment increased by 21,000 in June, about in line with the prior 12-month average gain of 18,000 per month. Within health care, employment continued to trend up in ambulatory health care services (+13,000) and in nursing and residential care facilities (+6,000).

Transportation and warehousing employment increased by 17,000 in June. Over the prior 12 months, this industry had added an average of 11,000 jobs per month. In June, couriers and messengers added 6,000 jobs.

Financial activities added 17,000 jobs in June, with a gain of 9,000 in insurance carriers and related activities. Employment in real estate and rental and leasing continued to trend up in June (+9,000). Financial activities had added an average of 5,000 jobs per month over the prior 12 months.

Manufacturing added 16,000 jobs in June, with all of the increase in durable goods manufacturing. Within durable goods, employment increased in motor vehicles and parts (+6,000) and in computer and peripheral equipment (+3,000).

Employment changed little over the month in other major industries, including mining and logging, construction, information, and government.

There were also significant revisions to the jobs numbers for the previous two months, with April’s new jobs number revised upward from 282,000 to 304,000 and May revised upward from 217,000 to 224,000, for a total revision for the two months of 29,000 new jobs. For the first six months of the year, then, we’ve averaged roughly 230,800 new jobs created per months, and for the three months that comprise the second financial quarter of the year the average has been 272,000 new jobs per month. This last number is significant because it suggests that economic growth in the second quarter will be far healthier than the first quarter of the year, which saw the economy actually shrink by nearly 3% due in no small part to an unusually bad winter. Indeed, the three months between April and June have seen some of the best jobs growth that we’ve seen in years, and it’s only likely to get better as we get a final revision for May and revisions to the June numbers over the next two months.  Additionally, the numbers are generally positive given the fact that the Labor Force Participation Rate, which remains at levels unseen since the Carter Presidency, was stable, which means pretty much all of the decline we see in the unemployment rate has been due to increases in employment. Average hourly wages also ticked up in June and average hours worked per week remained stable for the fourth month in a row, which is obviously good news for the people actually working.

The U.S. Labor Department said Thursday that the unemployment rate was 6.1 percent in June—but does that rate tell the real story?

In other words, the unemployed, the underemployed and the discouraged—a rate that still remains high.

The U-6 rate fell slightly in June to 12.1 percent. While it is down 210 basis points over the last year, the trend has been somewhat more volatile than in the main unemployment rate, which steadily declined.

This chart shows the differences in the levels of the U-3 rate and the U-6 rate: 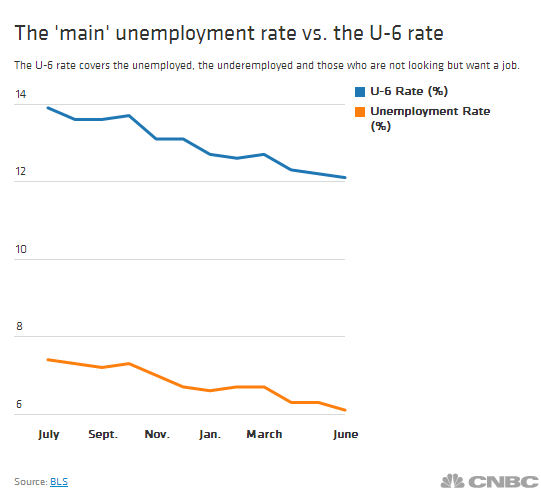 And, as this chart from Vox shows, the long term unemployment rate has been far more stubbornly high in this recession/recovery than it has been in the past: 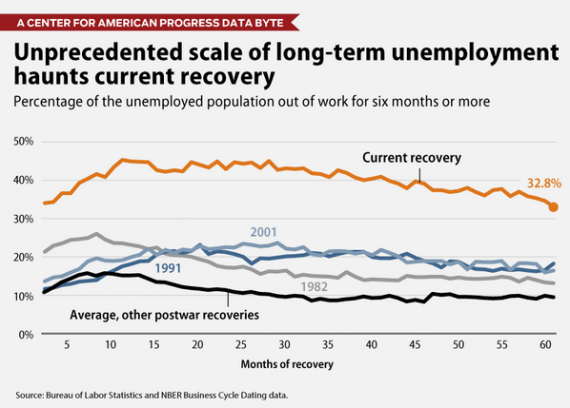 These caveats notwithstanding, there’s no denying that this is a good number, and more importantly that the trend that we’ve seen for 2014 in general and the last three months specifically bodes well for future job growth. Last month, we finally reached the point where the jobs lost in the Great Recession had been “recovered” in the bare sense that a numeric line was crossed. As I noted at the time, the important question isn’t just the number of jobs but the type of employment and how much those jobs pay. Another unknown is what happens when more of the people who have been sitting on the sidelines of the labor market start venturing back out into it looking for work. If these job creation numbers sustain themselves, they are likely to find a hospitable atmosphere, but it’s going to take many months of job creation numbers like this, and better, before all of those people are taken care of, assuming that they ever can be. For the most part, though, this is a good number, and another reason to celebrate this weekend.