Several of the top representatives of soccer's governing body have been indicted by a Federal Grand Jury in New York. 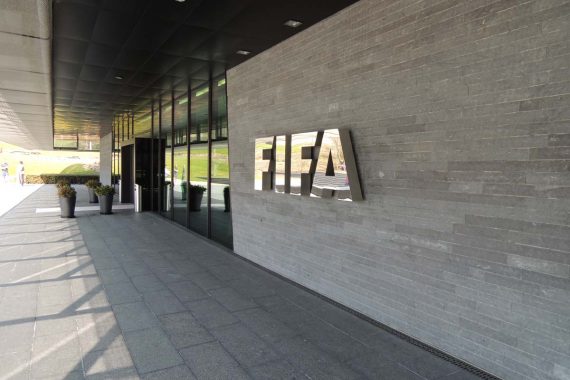 Several top officials of the international governing board for soccer, which also serves as the organizing committee for the World Cup every four years, have been arrested in Switzerland after indictments were issued by a Federal Grand Jury in New York City:

United States law enforcement officials declared in forceful terms on Wednesday that their broad investigation of FIFA had only begun and pledged to rid the international soccer organization of systemic corruption.

“These individuals and organizations engaged in bribery to decide who would televise games, where the games would be held, and who would run the organization overseeing organized soccer worldwide,” said Ms. Lynch, who supervised the investigation from its earliest stages.

The promise that the investigation would co tinue raised the specter of more arrests, but officials would not comment on whether they were investigating Sepp Blatter, the FIFA president and the man widely regarded as the most powerful person in sports. One federal law enforcement official said Mr. Blatter’s fate would “depend on where the investigation goes from here.”

“This is the beginning of our effort, not the end,” said Kelly T. Currie, acting U.S. attorney for the Eastern District of New York. Indeed, the indictment refers to 25 unnamed co-conspirators, from FIFA officials to a South Africa World Cup bid-committee official. “We are looking into individuals and entities in a variety of countries,” Mr. Currie said.The government is pursuing a “very aggressive prosecutorial response in order to change behavior,” said James B. Comey, director of the FBI.

The charges, backed by an F.B.I. investigation, allege widespread corruption in FIFA over the past two decades, involving bids for World Cups as well as marketing and broadcast deals.

Several hours after the soccer officials were apprehended at the hotel, Swiss authorities said that they had opened criminal cases related to the bids for the 2018 and 2022 World Cups — incidents that, more than any others, encapsulated FIFA’s unusual power dynamic. “In the course of said proceedings,” the Swiss officials said, “electronic data and documents were seized today at FIFA’s head office in Zurich.”

The Department of Justice indictment names 14 people on charges including racketeering, wire fraud and money laundering conspiracy. In addition to senior soccer officials, the indictment also named sports-marketing executives from the United States and South America who are accused of paying more than $150 million in bribes and kickbacks in exchange for media deals associated with major soccer tournaments.

“FIFA welcomes actions that can help contribute to rooting out any wrongdoing in football,” the organization said in a statement.

“The indictment alleges corruption that is rampant, systemic, and deep-rooted both abroad and here in the United States,” Attorney General Loretta E. Lynch said.

The Justice Department built its case with help from a former FIFA executive, Chuck Blazer, who secretly pleaded guilty in federal court in 2013. Mr. Blazer forfeited $1.9 million when he entered his guilty plea and agreed to make a second payment at sentencing.

The case is the most significant one yet for Ms. Lynch, who took office last month. She previously served as the United States attorney in Brooklyn, where she supervised the FIFA investigation. Ms. Lynch and F.B.I. Director James Comey were scheduled to hold a news conference on Wednesdday at 10:30 a.m. in Brooklyn.

With more than $1.5 billion in reserves, FIFA is as much a global financial conglomerate as a sports organization. With countries around the world competing aggressively to win the bid to host the World Cup, Mr. Blatter has commanded the fealty of anyone who wanted a piece of that revenue stream. He and FIFA have weathered corruption controversies in the past, but none involved charges of federal crimes in United States court.

United States law gives the Justice Department wide authority to bring cases against foreign nationals living abroad, an authority that prosecutors have used repeatedly in international terrorism cases. Those cases can hinge on the slightest connection to the United States, like the use of an American bank or Internet service provider.

The charges, which are detailed in a Justice Department Press Release, stretch back as far as twenty-four years ago and relate to such recent events as the 2010 World Cup in South Africa, the 2014 World Cup in Brazil, and the 2011 election of FIFA’s President. Left out of the mix, for the moment at least, are the selection processes for the 2018 World Cup, which will be held in Russia, and the far more controversial 2022 World Cup, which will be held in Qatar. That last selection has been the subject of controversy virtually from the moment that it was announced, in no small part because it makes absolutely no sense. Qatar’s national team has never qualified for the World Cup tournament, for example, so the fact that the nation was chosen to be the first representative of the Arab world to host the event was seen as odd. Additionally, the scheduling of the tournament would mean that the teams would be playing in open air stadiums in a desert environment in June and July, when temperatures regularly exceed 110° Fahrenheit on a regular basis. Given FIFA’s general history of corruption, it wasn’t long before allegations of corruption and bribery began to become commonplace even as some FIFA officials were saying as recently as eight months ago that the 2022 World Cup would be moved at some point in the near future. Those allegations will apparently be investigated by the Swiss, although it’s entirely possible that they could become the subject of new indictments in the United States if a connection is found to the United States. In this case, the connection lies both in the fact that the transaction at issue involves the FIFA entity responsible for the North and Central America and because at least some of of the bribery involved endorsement and sponsorship deals for foreign teams by American companies.

As I said, none of this is really all that much of a surprise. The corruption and bribery allegations about FIFA have been public knowledge for decades now, and what’s alleged here probably doesn’t even scratch the surface of what has been going on all around the world. The difference is that, for the most part, the rest of the world has looked the other way while FIFA’s board members and officials pocketed money left and right while handing out privileges such as the hosting rights for the World Cup and other regional tournaments. As Ben Wright notes this morning in The Telegraph, though, the U.S. tends to approach white color crime much more aggressively than another nations do. It may also be the fact that, because soccer is not as huge a passion in the United States as it is elsewhere, law enforcement feels a free-er hand to air the dirty laundry of the sport’s governing body. Finally, the reach of the U.S. dollar, American banks, and American corporations across the globe means that there is very little that could not theoretically fall within the jurisdiction of an American court in the context of an international business like the one that FIFA operates. This is why future indictments in the United States related to the Qatar bid cannot be ruled out.

This is likely to be a much bigger story outside the United States, but it’s probably not over yet.

FILED UNDER: Crime, Economics and Business, Law and the Courts, Sports, FIFA