More problems for the planned 2022 World Cup in Qatar. 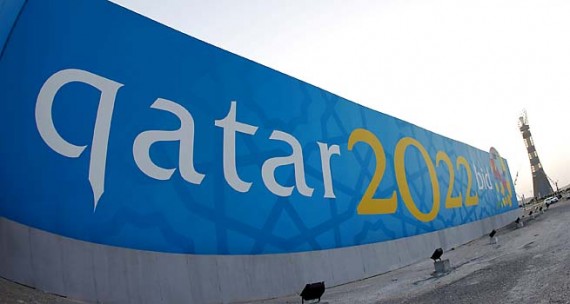 At the time it was made, the decision to grant the 2022 World Cup to Qatar seemed to be based as much on politics as anything else. Middle Eastern nations had been lobbying for a Host City in the Middle East for some time now, and the Qatari’s seemed like the best choice of all the available nations, especially since the government was apparently willing to put so much money into making the nation ready for one of the premier sporting events in the world. Very quickly, though, things began to unravel and the choice has seemed more and more disastrous. At the top of the list, of course, is the fact that summers Qatar are incredibly hot, to the point where playing games outdoors was simply untenable. As a result, FIFA officials have been openly debating shifting the games to later in the year. However, that would cause serious scheduling problems for many European nations since the proposed new dates would fall right in the middle of when their professional leagues, which are the source of most of the star players, are playing their regular season matches. Additionally, questions have been raised in the last year over the safety practices being followed by the construction firms building facilities in Qatar for the games, with some estimating that over 1,000 Nepalese workers brought in for the work have been killed or injured already. Now, the Qatari bid is being thrown into further jeopardy with revelations that the Qatar won its bid by bribing FIFA officials:

Fifa is facing fresh allegations of corruption over its controversial decision to award the 2022 World Cup to Qatar.

The Sunday Times has obtained millions of secret documents – emails, letters and bank transfers – which it alleges are proof that the disgraced Qatari football official Mohamed Bin Hammam made payments totalling US$5m (£3m) to football officials in return for their support for the Qatar bid.

Qatar 2022 and Bin Hammam have always strenuously denied the former Fifa vice-president actively lobbied on their behalf in the run-up to the vote in December 2010.

But, according to emails obtained by the Sunday Times and seen by the BBC, it is now clear that Bin Hammam, 65, was lobbying on his country’s behalf at least a year before the decision.

The documents also show how Bin Hammam was making payments directly to football officials in Africa to allegedly buy their support for Qatar in the contest.

Qatar strongly denies any wrongdoing and insists that Bin Hammam never had any official role supporting the bid and always acted independently from the Qatar 2022 campaign.

When approached by the Sunday Times to respond to their claims, Bin Hammam’s son Hamad Al Abdulla declined to comment on his behalf.

Although the vast majority of the officials did not have a vote, the Sunday Times alleges Bin Hammam’s strategy was to win a groundswell of support for the Qatari bid which would then influence the four African Fifa executive committee members who were able to take part in the election.

Forbes goes into more detail about how these new allegations could derail Qatar’s bid to put itself at the center of the sports world eight years from now:

The allegations come on the eve of a meeting between Michael Garcia and Qatar officials. Garcia is a US attorney tasked in July 2012 by the FIFA executive to investigate ethics abuse within the world governing body.

In addition, Qatar has been under intense scrutiny for its human rights record and for lax workplace health and safety practices that have led to scores of construction workers being killed or injured in the Gulf State.

Then there is the issue of when the tournament will actually be played.

The Qatar bid for 2022 was based on a June-July schedule as were the other bids from Australia, Japan, South Korea and the USA. Since the award in 2010 the claim by Qatar that the stadiums would be air conditioned to cool the 50 degree summer heat has been found to be about as possible as their team winning the World Cup in 2014.

A move to a “winter” schedule is now seen as the only viable option if players and spectators are to participate and attend in a safe environment.  But even then there are significant problems. A change in season will require an extensive shut down of some of the world’s major leagues – particularly in Europe – and there is also the 2022 Winter Olympics to consider. (Bidders for that event are dropping like players in Qatar summer heat but that is another story for another day.)

While complaints from European leagues might receive short shrift and be waved off as if coming from brats, it is harder to do the same to broadcasters who deliver hundreds of millions of dollars to the FIFA treasury each cycle.

A decision on the 2022 schedule may be made in March of next year but the Sunday Times’ bombshell, Garcia’s on-going investigation and discontent from wealthy leagues and broadcasters may derail the timeline.

The BBC is also reporting that FIFA’s Vice-President has said publicly that he would support a re-vote to find a new host city for the 2022 World Cup, something that has only been whispered about in the past.

While this is largely a sports story, and indeed a story about a sport that most Americans don’t seem to care very much about, there are some interesting political dimensions at play here. The pressure on FIFA to select a Middle Eastern nation for these games was quite high, much like the pressure on the International Olympic Committee when it awarded the 2016 Olympics to Brazil. Pulling the games at this point would be a tremendous, and public, slap in the face to the Qataris and would likely not go over very well in the Middle East as a whole, especially if the games ended up being held in Europe or South America as they most frequently in the past. Whether this will cause FIFA to hesitate on pulling the plug is unclear. What is clear, though, is that a decision will have to be made soon, most likely before the conclusion of the tournament set to start in Rio de Janiero later this month.

Incidentally, the 2022 World Cup isn’t the only international sports tournament with a cloud hanging over its head. For months now, there have been concerns expressed in public and in leaked private conversations about whether or not Rio will be ready for the Olympics just two years away. In addition to infrastructure issues, there are also questions about the reliability of the city’s transportation and public sector unions and whether or not they will use the games as the occasion to stage a strike. With just over two years to go, there isn’t nearly as much time for the IOC to act as there is for FIFA with regard to Qatar, of course. Nonetheless, there have already been some reports speculating that the IOC could decide to move the Olympics out of Rio, with the likely replacement location being London. The IOC has denied these reports, but the rumors persist and would likely be inflamed if the World Cup ends up being the logistical disaster that some fear. As with Qatar, the Rio selection is highly political given the fact that this would be the first Olympic games set in South America.