New York Mayor Michael Bloomberg says he isn't running for President, but he's sure acting like a guy who's at least thinking about it. 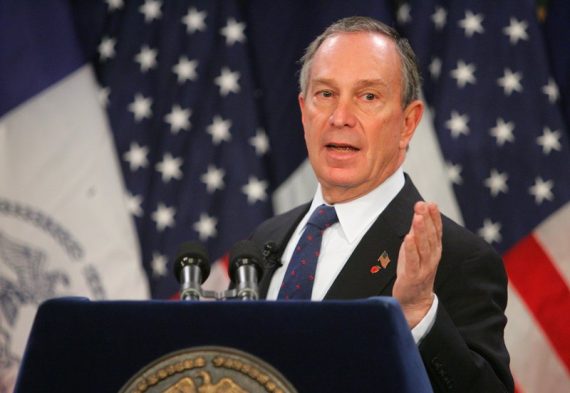 “There’s nothing” that would compel him to run in 2012, Bloomberg told CBS News. “I’m not going to run for president,” he said. “Period. End of story.”

But interviewer Katie Couric persisted: “Ever?”

“I think at my age, ever is the easy thing to say,” said the 68-year-old Bloomberg.

On the same day he was saying that, though, Bloomberg delivered a major speech where he addressed a host of national economic issues:

In the guise of offering a blueprint to fix the broken economy, Bloomberg offered a withering critique of the broken politics practiced in Washington and Albany. The politician who started his career as a Democrat, became a Republican to run for mayor and then announced that he was an independent, took aim at left and right with equal abandon.

He attacked the “ideologues on the left” for clinging to the belief that taxing and spending can restore prosperity and for holding a government-knows-best approach to creating jobs. He attacked “ideologues on the right” for entrusting all faith in the free market and writing off any significant role for government in shaping the environment in which the economy can flourish.

The political parties, he argued, fuel the discontent instead of finding ways to improve people’s lives. “They incite anger instead of addressing it, for their own partisan interests,” he said. They follow the public mood rather than shape it.

“When did cooperation in government become treason?” he asked. “The new ‘politics as usual’ is making a mockery of our democracy and a mess of our country. We’ve got to stop it, because we’re paying a heavy price. In fact, right now, we are falling behind the world in education, technology, economic opportunity – even life expectancy.”

He praised the agreement between President Obama and congressional Republicans to extend the George W. Bush-era tax cuts for two years and extend unemployment benefits for 13 months. But he chastised politicians in Washington for not moving immediately to take up the recommendations of the national debt and deficit commission. “We need more than a commission and more than lip service,” he said. “We need results. And not next year or the year after, but now.”

For a guy who says he isn’t running for President, that sounds very much like a speech that a guy running for President would make. The problem for Bloomberg, of course, is that it’s hard to see how he could turn this message into a Presidential campaign that actually had a chance of winning. For one thing, there doesn’t seem to be much of a desire out there for a Bloomberg candidacy among voters. For another, even if he did run, it’s unclear how he could do anything other than deny an Electoral College victory to either President Obama or whoever the Republicans nominate. That would throw the election into the House of Representatives, where it seems unlikely that Bloomberg would fare well at all. So, outside of the fact that pundits on the cable news shows and in the editorial pages of  The New York Times like to talk about it,  this idea of a Mike Bloomberg boom seems to be pretty non-existent. Perhaps Bloomberg recognizes that fact, and that’s why he’s telling Couric that he’s not interest in running.

Video Exposes Katie Couric’s Anti-Palin Bias ! Or, You Know, No It Doesn’t

Sarah Palin: Now That I Think About It, Katie Couric’s Questions Were Fair After All