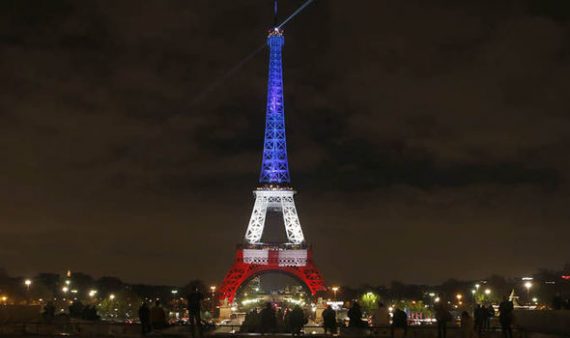 PARIS — The far-right party of Marine Le Pen was poised to make major gains after the first round of voting in regional French elections on Sunday in the wake of terrorist attacks that traumatized the country last month.

When the votes were counted, Ms. Le Pen’s National Front party was pulling far ahead in two of France’s 13 regions and leading in four others. Trailing were the right-leaning parties, including the Republicains, led by former President Nicolas Sarkozy. Even further behind were the Socialists, whose best-known figure is President François Hollande.

Appearing before her supporters, Ms. Le Pen called it a “magnificent” result, saying the National Front was “the only party that can reconquer the lost territories of the republic, of Calais, where we won 50 percent of the votes, or of the suburbs.” What Ms. Le Pen described as “lost territories” were the French city of Calais on the English Channel, which now has more than 4,000 migrants on its doorstep hoping to reach Britain, and the suburbs of major French cities, many of which have sizable Muslim populations.

The National Front “is the only party to defend an authentically French republic,” she added, and to be dedicated to “the preservation of our way of life.”

With 100 percent of the votes counted, the turnout nationwide was 50 percent, which was somewhat higher than in the last regional elections, in 2010.

The National Front received 41 percent of the vote in the northern region known as Nord-Pas-de-Calais-Picardie, as well as in the southern region of Provence-Alpes-Côte-d’Azur, and members of the Le Pen family were at the top of the ballot in both regions\

The second round of voting next Sunday will determine the final results. In the last several elections the National Front has done well in the first round but found it harder to sustain gains in the second, when other competing parties have united or withdrawn to keep the far right from winning.

However, this time the high numbers for the National Front in a number of places suggest that the old political calculus may not hold, especially if the more traditional conservatives led by Mr. Sarkozy refuse to join with the Socialists to form a bloc.

Mr. Sarkozy announced after his party’s second-place showing that its candidates would not join with other parties or withdraw from the race.

In contrast, Jean-Christophe Cambadélis, the head of the Socialist Party, said that its candidates would withdraw from the elections in the two regions where the National Front did best, and that elsewhere it would join with other parties.

“The party of the extreme right threatens many regions of France,” Mr. Cambadélis said.

“The left is, then, the last rampart of Republican France against the xenophobic extreme right,” he said, calling on all the left-leaning parties to join together to defeat the National Front.

Ms. Le Pen and her party have thrived on an anti-immigration message that has verged on anti-Muslim, as well as a call for re-establishing European borders. These notions had already found traction as France faced an influx of Muslim immigrants from war-afflicted areas of the world. But she gained even more momentum after the attacks in Paris on Nov. 13, in which 130 people were killed.

On the surface, of course, many both inside and outside of France will read the results of these elections as a reaction to recent events such as the attacks in Paris and the migrant crisis that has been impacting Europe since the summer. Both events, after all, hit on themes that the National Front has been at the forefront of since its founding such as opposition to increased immigration into France, and especially immigration from Muslim nations such as Algeria, which has been one of the largest sources of immigrants into France for decades due to that nation’s history as a French colony and the continued relationship that Paris has maintained there and with other predominantly Muslim nations in Africa. Indeed, the fact that French President Hollande has responded to the attack in Paris with a ramp-up in French military involvement in the war against ISIS and a very visible effort to help craft an international coalition against the group has, in part, been attributed to a desire on his part to address domestic political concerns that the attacks would both hurt his already troubled political standing and help the political fortunes of groups like the National Front. At the same time, though, political analysts in France are warning against attributing these results solely to a response to the attacks, and raising the concern that this is just another step on the road to the National Front, which has remade its image significantly since Marine Le Pen took control of the party away from her father, becoming a more prominent player in French politics:

[S]everal analysts said it was important not to overplay the recent attacks in explaining her success. Rather, they see a long-term trend in which the National Front has gained ground in election after election. It has done so even more rapidly since Ms. Le Pen took leadership of the party from her father, Jean-Marie Le Pen, in 2011.

“The dynamic in favor of the National Front is not a superficial reaction of the French electorate in a situation of crisis after the attack,” said Bruno Cautrès, a political analyst and public opinion specialist at the Center for Political Research at Sciences Po.

“It is something more long lasting in the French political system,” he said.

The outcome will be read here as a forecast of the politics of the presidential election in 2017, but already Ms. Le Pen has changed the tenor of political debate in France. Across the political spectrum, politicians are taking a harder line on immigration, and there is a newfound willingness to reconsider the rules that govern the open borders among European Union countries.

“She had won before the vote,” said Joël Gombin, a political analyst at the Observatory for Radicalism at the Jean-Jaurès Foundation, a think tank.

“The old themes and proposals of the National Front have been reprised in the political debate, not only on the right but also, more and more, on the left and in particular in the voice of the executive branch, and that legitimizes the National Front,” he said.

Both Mr. Hollande and Prime Minister Manuel Valls have evoked more nationalistic themes recently and taken a particularly hard line on security issues. Although the government is leans left, its leaders have begun to discuss extending the state of emergency, which gives law enforcement extraordinary powers, beyond its current duration of three months.

The next French Presidential and national legislative elections will not take place for another two years, so the national impact of these National Front gains is likely to be somewhat muted for the time being. Additionally, to the extent that these results are at least partly attributable to the events of November 13th and the migrant crisis of the summer of 2015, it seems unlikely that those issues will be resonating quite as strongly in two years at that point as they are today. Nonetheless, as the analysis quoted above notes, the rise of the National Front is something that has been going on for far longer than just the past several months or weeks and these victories are likely to strengthen the parties as France heads toward its next round of elections. Three years ago, Le Pen herself ended up coming in third place in the first round of France’s Presidential election with nearly 18% of the vote, but her party only ended up winning two seats in the legislature and actually got nearly three million fewer votes than LePen received as a Presidential candidate. One suspects that the Front’s prospects will be much better when 2017 rolls around, though, and while it seems unlikely that Marine Le Pen will be elected President at that point, it is fairly clear that the National Front is likely to become a more powerful bloc in the French Parliament and a much bigger influence in French politics. The likelihood of this happening would probably increase if there were additional terror attacks in the future, especially if those attacks originated from among the poorly assimilated immigrant enclaves that exist in many French cities.

As I’ve noted before, it seems apparent that the rise of far right parties like the National Front in France and other similar parties other parts of Europe is a dual reaction to the immigration issue and to the failure of mainstream political parties in many parts of Europe to address the concerns of voters.  On the first issue, of course, the fact that many nations in Europe have a long history of failing to adequately assimilate immigrants from other parts of the world is a long standing issue that only now seems to be coming home to roost. In many nations, these immigrants continue to live in isolated communities where they seldom interact with outsiders. While this is something that isn’t uncommon in the United States among first generation immigrants, it is typically a temporary situation here that doesn’t last much past the first generation of immigrants, and sometimes even not that long. In Europe, though, these immigrant ghettos, for lack of a better word seem to become long-standing in no small part because the wider culture seems either unable or unwilling to integrate outsiders into the wider culture, and sends a message to these immigrants that they are somehow not really part of the country they live in. The best most recent example of this, perhaps, can be seen in the Molenbeek neighborhood in Brussels, Belgium, which has been the source and a refuge for many recent terror cells thanks to a process that has turned the neighborhood into a center of radical Muslim activity due in no small part to neglect and inattention from city and national officials. In many nations, communities like this have become recruiting venues for ISIS and other radical groups, and the problems that these communities have created, again in no small part due to neglect from the mainstream parties and the wider culture of many European nations, have become the fuel that have empowered far-right parties like the National Front. As long as that continues, and if there continue to be events like the Charlie Hebdo and November 13th attacks, then unfortunately it’s likely that people like Marine Le Pen will become more prominent players in European politics.