Far right parties are succeeding in Europe because the mainstream parties aren't offering an alternative. 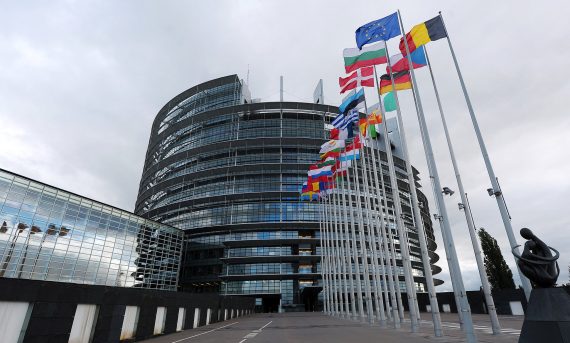 Last week, Dave Schuler noted that the results of the elections for the European Parliament showed a decided tilt toward the right throughout the continent, and in several nations a tilt toward parties that have previously lived on the fringes of politics. This is of concern for several reasons, not the least of them being the possibility that this success at the continental level will translate into success in national elections and that the political climate in much of Europe could take on a decidedly nativist, anti-immigrant tone. Over at Vox, Matthew Yglesias correctly points out that the mean reason that this shift is happening is not because Europeans are suddenly becoming rabidly right-wing racists, but because the mainstream parties in much of Europe aren’t doing anything to make life better for their constituents and the mainstream parties aren’t really offering significantly different agendas:

The far-right National Front party captured nearly a quarter of the French seats in this week’s European Parliament elections, prompting German Finance Minister Wolfgang Schäuble to proclaim the results a “disaster” that brought “fascists” closer to the seat of power.

“What mistake have we made,” he asked, “if a quarter of the electorate voted for absolutely not a right-wing party, but for a fascist, extremist party?”

Ot’s an excellent question, but it’s also bizarre that Schäuble doesn’t yet know the answer. The answer is that political elites in Germany and France and Spain and Italy and elsewhere throughout the continentensnarled Europe in a misguided single currency scheme and then, having adopted it, have been unwilling to take the kind of steps that could make it workable.

And it’s not like they weren’t warned. In a truly bizarre 2009 paper for the European Commission titled “The euro: It can’t happen, It’s a bad idea, It Won’t Last — US economists on the EMU, 1989 – 2002,” Lars Jonung and Eoin Drea recount the overwhelming skepticism from the western shore of the Atlantic about the idea that Finland and Portugal should be using the same currency. What’s true, of course, is that American economists turn out to have massively underrated the willingness of European politicians to press forward with a bad idea even when the problems became apparent.

In the European Parliament, the upshot of the new election results is that the two main parties will govern together — just as they’ve been governing together throughout the eurozone’s existence.

Here in the US, there’s a tendency to rightly bemoan the way extreme partisanship and perverse incentives tends to make it impossible to get anything done. But the basic idea of rival political parties offering different approaches to the major issues of the day makes a lot of sense. It means that when one set of politicians is seen as failing, they can be replaced with another set who’ll bring a different approach. But in most European countries, there simply isn’t meaningful disagreement about how to handle the ongoing economic disaster. So over time, voters looking for something different have to turn to something outside the mainstream.

On some level, it’s something of an odd development given that all the nations in question have Parliamentary systems and it’s generally assumed that such systems allow for the existence not only of more political parties, but of parties that are generally in the mainstream that paint starker contrasts between each other than we’re used to in the United States. On the domestic front, perhaps, this is still largely true but when it comes to continent-wide policy on issues such as the Euro the major parties in all the major countries, and especially in France and Germany, seem to be in agreement on a policy that has become widely unpopular throughout the continent and, fairly or unfairly, is being blamed for a wide variety of economic problems. Given that, it is perhaps not surprising that voters would turn to the parties that are actually offering them an alternative when it comes to Euro policy, even if those parties tend to be so far to the right that it would be a serious concern if they actually obtained real political power rather than the faux power that comes with being a member of the European Parliament.

The big question, of course, is whether the success that these parties had in last weekend’s elections will translate into anything at the national level.  The first real test of that will come next year when the United Kingdom holds its first Parliamentary elections since 2010. The UK Independence Party, which did quite well in the elections for the European Parliament, will face its first national test since becoming a significant political presence. Recent polling has shown it out performing the Liberal Democrats and competitive with the Tories and Labour. Depending on how that holds up, the UKIP could find itself playing the role of power broker in a potential coalition government, or an effort by the other three parties to form a coalition to lock the anti-Europe forces out of power. Absent a collapse in support for the ruling parties, there aren’t likely to be elections in France for several years, though, so its unclear if the National Front would be able to capitalize on any supposed momentum it may have gotten from these elections. In that regard, it’s worth noting that the National Front has been a factor in French politics for decades now and has generally failed to attain any real power, although some have suggested the party’s fortunes may be changing now that it is lead by Marine Le Pen rather than her father.

In the end, of course, the political future in Europe will depend to a large extent on the economic future of Europe. Outside of Germany, France and the United Kingdom, that’ s not looking particularly good at the moment, though, so we can probably expect more of this type of politics in the future.