Hillary Clinton remains as much the inevitable Democratic nominee as she always has been.

Hillary Clinton shouldn’t worry that a string of possible controversies will hamstring her in the Iowa presidential caucuses, but many Democrats fear the disputes could hamper her in the general election, a new Des Moines Register/Bloomberg Politics Iowa Poll suggests.

At least 70 percent of likely Democratic Iowa caucusgoers say they aren’t bothered by any one of three issues that Clinton opponents have pushed as controversies. The issues are her use of a private email server instead of a government account when she was secretary of state; her handling of the attack on the U.S. consulate in Benghazi, Libya, and its aftermath; and foreign governments’ donations to the Clinton Foundation.

But 66 percent of the likely Democratic caucusgoers say they think at least one of the three issues could hurt Clinton in the general election if she becomes their nominee, the poll shows.

Clinton continues to hold a commanding Iowa lead among possible Democratic candidates for president, the poll shows. A whopping 57 percent of likely Democratic caucusgoers say she would be their first choice for president. That’s one point higher than Clinton scored in an Iowa Poll conducted in late January, which was more than two months before she formally launched her campaign.

Almost three in four (72 percent) say Clinton is their first or second choice.

Vermont Sen. Bernie Sanders has replaced fellow populist Elizabeth Warren, a senator from Massachusetts, as the leading contender to Clinton among Iowa Democrats, the poll finds. Sixteen percent of likely Democratic caucusgoers say Sanders would be their first choice for president. That’s up from 5 percent in the January poll.

After Sanders, Vice-President Biden, who is probably not running, comes in with 8%, former Maryland Governor Martin O’Malley, who entered the race on Saturday, is at 2%, and former Virginia Senator Jim Webb, who may enter the race, is also at 2%. Former Rhode Island Governor Lincoln Chafee, who will enter the race this week, did not register in the poll at all. What this tells us, of course, is that Clinton is in a far better position than she was eight years ago. Back then, a Des Moines Register poll that was conducted in mid-May 2007 showed Clinton in third place in Iowa at 21%, behind both Barack Obama who was at 23% and John Edwards who was at 29%. (Source) Even at this early date, it was clear that Clinton had strong challengers for the Democratic nomination.  That simply isn’t the case this time, and absent some massive mistake on Clinton’s part that likely leads to someone else entering the race, it’s not going to happen between now and February either.

The idea that Clinton’s eventual loss to Barack Obama in 2008 is some kind of indication of what could happen to her in 2016 has been a myth that many people on the right, along with political pundits who like to have something to talk about, have been repeating for the better part of a year now. It is entirely false, though, because it’s rather obvious that 2016 is nothing like 2008. Unlike 2008, there is simply nobody running on the Democratic side of the aisle, or even any potential candidate, that comes close to being the same kind of candidate that Barack Obama was in 2008. Even if she were running, Elizabeth Warren would not fit this description, and neither Bernie Sanders nor Martin O’Malley fit the bill either. Among potential candidates, the closest thing to a candidate with a political record comparable to Clinton’s is New York Governor Andrew Cuomo, who has expressed no real ambition for the Presidency and in any case has not taken any of the moves that a candidate running for President would have to have taken by this point in the cycle. Vice-President Biden, who has already run for President twice before, certainly doesn’t come across as someone who could challenge Clinton’s inevitability.  As things stand right now, Clinton’s poll numbers are close to what you’d expect to see for an incumbent President running for re-election and, at least among Democrats, she seems to be invulnerable. It’s certainly possible something could happen over the course of the next year to change all of that, but it doesn’t seem to be likely at all. 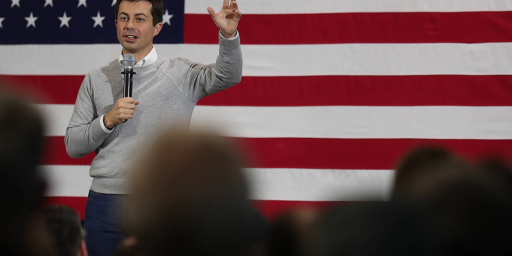