One of the most repeated comments about the 2016 race is based on something that just isn't true. 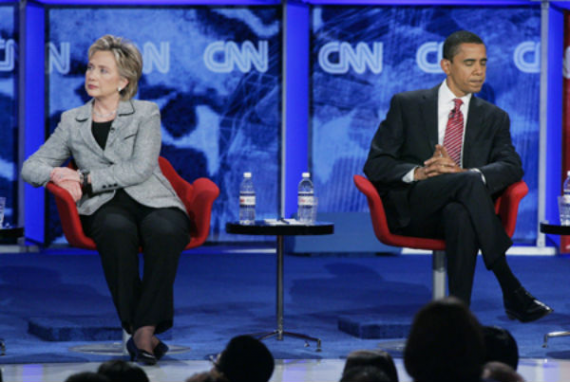 One of the most persistent narratives of the 2008 Presidential election is the idea that an unknown guy named Barack Obama, who had just been elected Senator two years earlier, came out of nowhere and did something nobody thought he could in beating Hillary Clinton. It’s an argument that has motivated supporters of “underdog” candidates in both parties ever since, and it has been cited many times in the past year by Republicans and other pundits seeking to undermine the idea of Hillary Clinton as the “inevitable” Democratic nominee in 2016 should she choose to run. It’s one of those political stories that everyone seems to think is true, but as Aaron Blake points out today, it’s not really true:

1) Clinton was the favorite, but Obama was instantly a player

Here’s how top Obama adviser Valerie Jarrett recalled it all in a “Meet the Press” interview airing Sunday: ”I mean, my goodness, if we listened to the polls, he would’ve abandoned the race in the middle of the primary session.”

The truth: Basically every major poll conducted after the 2006 election showed Obama in second place for the Democratic nomination. Many of them showed him down by double digits, yes, but he was hardly out of contention by any stretch of the imagination.

Politicians and their supporters are great at recalling that time everyone counted them out — even if it never technically happened.

There were definitely doubters with Obama, but it’s not like he was this nobody coming on to the political scene. He had delivered a rousing speech to the 2004 Democratic National Convention, and some early polls even showed him within 11 or 12 points of Clinton – before he even announced his campaign in February 2007.

True, all of these polls showed Clinton up by double digits. But anybody who thinks an 11- or even a 20-point lead a year before the first primaries is insurmountable probably doesn’t know much about politics.

Blake goes on to note that the meme of Hilary’s inevitability wasn’t as big as we remember it either:

Going back to 2006 and 2007, we could find very little evidence of anybody publicly calling Clinton the “inevitable” nominee. Here’s what we found when we searched in LexisNexis for “Hillary Clinton” and “inevitable”:

So basically there were maybe a few examples of people suggesting she might be inevitable, and slightly more people ascribing that view to unnamed other people (who might or might not have existed or been willing to speak on the record).

And then came the New York Times’s Adam Nagourney, in April 2007:

“For Senator Clinton, Democrat of New York, the situation is not so seemingly dire, but any hope she had of Democrats embracing her candidacy as inevitable has been dashed by the rise of Senator Barack Obama of Illinois, the continued strength of John Edwards of North Carolina, and obvious discomfort in some Democratic quarters of putting another Clinton in the White House.”

That’s right, as of April 2007, just two months after Obama launched his campaign, whatever inevitability bubble existed had pretty much burst. What would follow was a whole bunch of hand-wringing about how some of those people had declared the primary over way too early.

Blake goes on to note that Obama wasn’t the only candidate in the 2008 field. We also had Senators Chris Dodd and Joe Biden, and former Senator John Edwards. Yes, in retrospect all of these people don’t seem all that formidable, but if you put yourself in the place of someone 2006-2007, its not so hard to say that. After all, with those five candidates we had a total of 72 years of experience in the United States Senate, perhaps the largest cumulative tenure of any Presidential field in modern history. With the exception of Obama, of course, all of these men flamed out, but at the time it wasn’t apparent that this would happen and, the myth that has developed in the ensuing years that Hillary Clinton was an inevitable candidate brought down by a guy who came out of nowhere just doesn’t measure up to the facts.

As Blake puts it, getting this history correct is important because of the fact that many people, as I said both Republicans who are obviously seeking to undermine Clinton’s potential campaign and pundits who are trying to create a story where it’s not at all clear that one exists. It is simply incorrect to say that polls showing that Hillary Clinton has a huge lead today don’t tell us much because of what happened in 2008, mostly because what we have been led to think happened in 2008 didn’t really happen. Barack Obama was showing signs that he could be a formidable challenger early on in the campaign, and while the manner in which his campaign took off was something of a surprise, the fact that he ended up being the person who fought Clinton for the nomination until the end of the race really isn’t a surprise in retrospect. 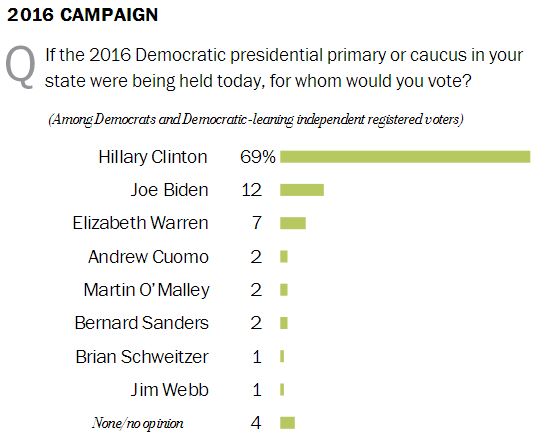 Unlike the 2008 election cycle, there is quite simply no candidate that comes anywhere close to where President Obama was when the race started eight years ago. Indeed, Clinton’s numbers among Democrats are comparable to what you’d expect to see for an incumbent running for re-election rather than a potential candidate in an open race. Is it possible that someone, including someone not on this list, could come out of nowhere and surprise everyone? Sure, anything’s possible. As things stand right now, though, that doesn’t seem likely and it Clinton seems like a virtual lock if she runs in a way that quite simply was not true the last time she ran. Trying to compare what happened in 2008 to what could happen today, based on the available evidence, quite simply isn’t a valid argument.