Did President Obama pull off a diplomatic masterstroke? Or is he muddling through? 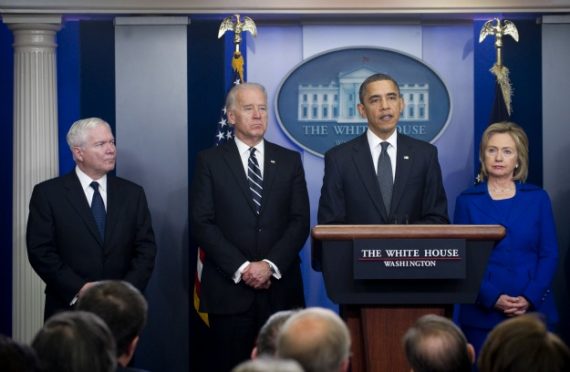 In the comments of my early morning piece looking at our apparent decision to go to war in Libya (qualified only because Muammar Gaddafi’s announcement of a cease-fire calls into question what comes next ), Michael Reynolds argues that, whatever the merits of the intervention, President Obama pulled off a diplomatic masterstroke such that “in a matter of a week or ten days, the Arab League and the UNSC and presumably the neighbors all lined up to support an open-ended, ‘Do whatever you want’ resolution” and did so “in such a subtle, no-fingerprints way that the US appears to have been almost a sideline cheerleader.” He adds, “How many months did it take George HW Bush to pull off something similar and we all rightly hailed that as statesmanship and high-order diplomacy.”

I responded with my guess that “Gaddafi forced his hand here and, as with Bill Clinton in Kosovo, he let the European Allies shame him into doing something his heart wanted and his head told him wasn’t the right policy. Further, this is classic Obama community organizer tactics: Let everyone exhaust themselves getting their arguments out there and then step in and let them think they’ve reached a decision point.”

Foreign Policy‘s Josh Rogin now has a very detailed accounting of “How Obama turned on a dime toward war.”

The key decision was made by President Barack Obama himself at a Tuesday evening senior-level meeting at the White House, which was described by two administration officials as “extremely contentious.” Inside that meeting, officials presented arguments both for and against attacking Libya. Obama ultimately sided with the interventionists. His overall thinking was described to a group of experts who had been called to the White House to discuss the crisis in Libya only days earlier.

“This is the greatest opportunity to realign our interests and our values,” a senior administration official said at the meeting, telling the experts this sentence came from Obama himself. The president was referring to the broader change going on in the Middle East and the need to rebalance U.S. foreign policy toward a greater focus on democracy and human rights.

So, why Libya and not Egypt or Tunisia?

“In the case of Libya, they just threw out their playbook,” said Steve Clemons, the foreign policy chief at the New America Foundation. “The fact that Obama pivoted on a dime shows that the White House is flying without a strategy and that we have a reactive presidency right now and not a strategic one.”

Inside the Tuesday evening meeting, senior officials were lined up on both sides. Pushing for military intervention was a group of NSC staffers including Samantha Power, NSC senior director for multilateral engagement; Gayle Smith, NSC senior director for global development; and Mike McFaul, NSC senior director for Russia, who has 30-plus-years of experience advocating for democracy and human rights. Vice President Joe Biden also was a supporter of imposing a no-fly zone over Libya, an administration official said.

On the other side of the ledger were some Obama administration officials who were reportedly wary of the second- and third-degree effects of committing to a lengthy military mission in Libya. These officials included National Security Advisor Tom Donilon and Deputy National Security Advisor Denis McDonough. Defense Secretary Robert Gates was also opposed to attacking Libya and had said as much in several public statements.

Secretary of State Hillary Clinton called into the meeting over the phone, a State Department official confirmed. She was traveling in the region to get a first-hand look at how the new U.S. Middle East strategy is being received across the Arab world. Denied a visit with Egyptian youth leaders on the same day she strolled through Tahir Square, Clinton may have been concerned that the United States was losing the battle for the hearts and minds of the Arab youth at the heart of the revolution.

When Clinton met with the G8 foreign ministers on Monday, she didn’t lay out whether the United States had a favored response to the unfolding crisis in Libya, leaving her European counterparts completely puzzled. She met Libyan opposition leader Mahmoud Jibril in Paris but declined to respond positively to his request for assistance. This all gave the impression that Clinton was resisting intervention. In fact, she supported intervention, State Department official said, but had to wait until the Tuesday night meeting so that she didn’t get out ahead of U.S. policy.

“Gates is clearly not on board with what’s going on and now the Defense Department may have an entirely another war on its hands that he’s not into,” said Clemons. “Clinton won the bureaucratic battle to use DOD resources to achieve what’s essentially the State Department’s objective… and Obama let it happen.”

I agree with my friend Steve Clemons’ assessment except for one not insignificant detail: being reactive doesn’t preclude being strategic. Since the demise of the Soviet Union, foreign policy types have been looking for a new grand strategy to replace the Cold War era Containment policy. We’ve had various attempts, including the New World Order of Bush the Elder, the liberal interventionism of Bill Clinton, and the democracy promotion of Bush the Younger. But none proved cohesive or sustainable.

I happen to think the case for intervention in Libya is even weaker than it was in Egypt, in that we at least have strategic interests in the latter. But it’s not a completely silly notion to believe that our broader strategic goals are best served by standing up for the values we claim to promote. And it’s defensible to draw the line at the slaughter of civilians from the air while merely tut-tutting the beating of protesters with sticks.

Again, my preference would be to keep our involvement here at the level of diplomacy and sanctions. My threshold for going to war is political objectives that rise to the level of vital national interest which are attainable through the application of force. I’m rather sure the first part of that threshold hasn’t been met and am dubious of the utility of military tools even at achieving the lesser interests at stake here. But we’ve had four consecutive presidents now who’ve seen it differently.