America is about to enter a third war in the Muslim world with no clear idea of the end game. 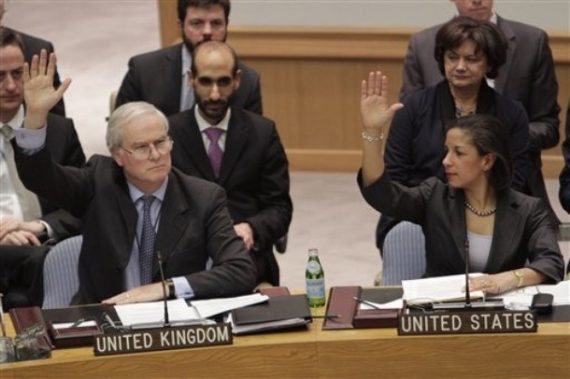 Yesterday morning, it looked for all the world like the international community was resigned to Muammar Gaddafi brutally suppressing the uprising against him. Hours later, the UN Security Council unanimously authorized “all necessary measures” to protect civilians. Now, it looks very much as though NATO is headed into another war.

This time, “NATO” is not a fig leaf for “the United States.” While Afghanistan remains a NATO operation in name, it has long since Americanized on the ground. On Libya, though, France and the UK have very much been leading while the Obama administration has been having a rather public squabble over what to do.

With U.S. forces stretched thin in with unpopular wars in Iraq and Afghanistan, the president is quite apparently not interested in another. And Secretary of Defense Bob Gates put an early damper on intervention when he told the House of Representatives that a “no-fly zone begins with an attack on Libya to destroy the air defenses” and would be “a big operation in a big country.”  A week ago, American intelligence chief James Clapper told Congress that it was quite likely the Gaddafi regime “will prevail” given the balance of power.

For once, however, the diplomatic team seems to have won out. Secretary of State Hillary Clinton has been waging a relentless internal battle in favor of intervention and issued what many analysts took to be a shot across the bow earlier in the week when she told CNN’s Wolf Blitzer she would not remain in the administration if there’s a second term.  And UN Ambassador Susan Rice has turned the arguments of Gates and Clapper on their head, saying that if a no-fly zone is inadequate, we’ll simply go further: “We are interested in a broad range of actions that will effectively protect civilians and increase the pressure on the Gadhafi regime to halt the killing and to allow the Libyan people to express themselves in their aspirations for the future freely and peacefully.”

So, the objections of those who’ll actually have to fight the war have been dismissed.

Senator Richard Lugar (R-IN) seems to be trying to put up another obstacle by continuing to insist  that a formal declaration of war by Congress is needed. Alas, that ship sailed with the 1973 War Powers Act, which authorizes the president to commit troops for 90 days without such permission. So, Congress won’t be an issue in the near term. And with the Security Council resolution, we have permission from the world to do something.

It appears that the something is open-ended intervention in a nasty civil war.

Foreign Policy‘s Josh Rogin reports that the administration held a classified briefing for the Senate Thursday afternoon outlining military action that would commence “within the next few days” and including not only the no-fly zone that most analysts think long since passed its expiration date but a “no-drive zone.” Senator Lindsey Graham (R-SC) told reporters afterwards that, “We ground his aircraft and some tanks start getting blown up that are headed toward the opposition forces.” Senator Mark Kirk (R-IL) said the operations would be run out Sigonella, twin US and NATO bases in Sicily.

And Ewen MacAskill and colleagues at The Guardian report that France is prepared to not only fly missions but has “offered the use of military bases on its Mediterranean coast about 750 miles from the Libyan coast.” More interestingly, “Several Arab countries would join the operation.”

Interestingly, Germany, which has a rotating seat on the Security Council, abstained from yesterday’s vote—as did the four BRICs, Russia, China, Brazil, and India. Foreign Minister Guido Westerwelle declared “military intervention is to take part in a civil war that could go on for a long time. Germany has a strong friendship with our European partners. But we won’t take part in any military operation and I will not send German troops to Libya.” He added, “Considering alternatives to military engagement is not the same as doing nothing.”

As one whose default position on these things is No, I share Westerwelle’s view. CNAS’ Andrew Exum, a veteran of the Iraq War, raises a set of concerns that echo the Weinberger and Powell Doctrines—or a decent International Relations 101 course:

What happens if Gadhafi pulls back? Do we continue to try and press the advantage of the rebels until his government falls? Do we have the authorization to do that? Do we expect a civil war in Libya to drag out, and if so, how will we take sides? If Gadhafi falls, what comes next? What will the new Libyan government look like? Will they be friendly to U.S. interests? Someone please tell me how this ends.

A lot of the things I have been reading have been along the lines of, “After the dictator falls, everything will be alright,” which sounds awfully familiar to Iraq ’03 veterans. I would hope that this time around, we are planning Phase IV and have a clear vision for how stabilization and reconstruction should go.

I worry for obvious reasons, but clearly, I hope this U.N. resolution alone forces Gadhafi’s hand and either causes him to step down or encourages someone in his inner circle to knock him off and cut a deal with the rebels. But hope is not a strategy, and along with that Phase IV planning I was talking about, I would also like to hear a little more about our strategic goals here.

Andrew McCarthy, in a blistering dissent from the official position of his employer, National Review, says “sure sounds like a full-blown U.S. invasion of Libya.” That’s not clear at this point. But ground forces will almost certainly have to be inserted at some point, if our goal is something other than killing Gaddafi and hoping for the best. Whether the boots on the ground will belong primarily to American soldiers and marines or to forces from other Allies, regional partners, or someone else remains to be seen.

Nor is it clear whose side we’re on. Oh, we know who we’re against. But if we’re going to commit blood and treasure to oust Gaddafi, we must have some idea what the end game is. Will we insist on keeping Libya whole, or will partitioning along tribal lines be an acceptable outcome? Presumably, there will be elections to choose a successor government. Are we willing to accept any result?

The Guardian‘s Simon Tisdall, a full throated advocate for this intervention, acknowledges that there are no guarantees:

The longer term impact of the intervention is immeasurable – but disaster is certainly one possible outcome. Like the first Gulf war, the involvement and support of Arab countries means the Libyan war will not be defined, except by hardline jihadis and al-Qaida, as another western assault on Muslim lands. But if the fighting is prolonged, if Gaddafi does not quit and run, if his more able sons take up his cause, if the intervention makes things worse not better for ordinary people (as in Iraq), if there is no clear-cut win but ongoing low level conflict and resistance (as in Afghanistan), then Arab opinion will turn against the westerners once more. The post-9/11 nightmare of the Pentagon’s long war without end will reproduce on the shores of the Mediterranean.

Obama and Cameron are looking for another Kosovo or Kuwait, not another Iraq. It’s a story, as they would prefer to write it, with a happy ending, producing a newly independent country, and another friend for the west. But they cannot control the outcome. Now they can only wait and hope they were right.

But, again, hope is not a strategy. These are questions we should have answers to before committing to yet another war in the Muslim world.